FAREWELL TO RAY ALAN AND LORD CHARLES.....NOT PRINCE CHARLES!(He's alive n' kicking, and apparently doesnt speak with a hand up his back, apparently) 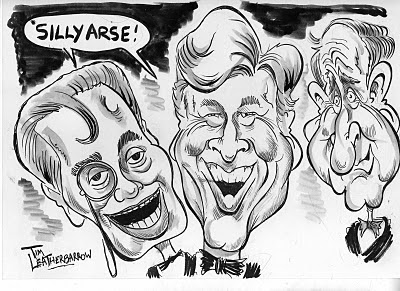 RAY ALAN(R.I.P.)....LORD CHARLES(R.I.P.).......PRINCE CHARLES(alive n' kicking)
Once upon a time when we were young and only had 3 telly channels; Testcards; The High chaperal and Benny Hill: All day religion on a Sunday; The Saturday Big Movie and Jimmy Hill on Match of the day. There was also lots of variety shows. One of the faces that was a fairly regular one popping up on Rolf Harris; David Nixon; Bob Monkhouse: Royal Varieties ,etc, etc was a guy called RAY ALAN.Sadly he 'popped his clogs' and died today.He was a ventriloquist.He was the best ventriloquist.(Does anybody know what one of those is nowadays?) But his puppet/character was the wonderful monacled and permamentaly sozzled LORD CHARLES("Silly arse!")....If you want to see how funny and clever this guy was look on you tube at a sketch where Lord Charles is trying his hand at being a ventriloquist. Wonderful stuff!

I cant help wondering with all the stuff in the various obituaries and the mentions of LORD CHARLES.....I wonder if some foreign leaders ,maybe Ballcock o'barnpot (the afro-irish U.S.president) amongst them have sent messages of condolance to THE QUEEN, after having confused Lord Charles with PRINCE CHARLES. Who is, as we all know alive and kicking and doesnt need a hand up his back to function....Well! iAssume so ,but what he does in his own time is up to him.
Posted by Tim Leatherbarrow at 15:30 69 comments: Links to this post

IF OPPOSITES ATTRACT DOES THE OPPSITION CONGEAL? AS OPPOSING MILIBAND BROTHERS OPPOSE FOR THE OPPOSITION! 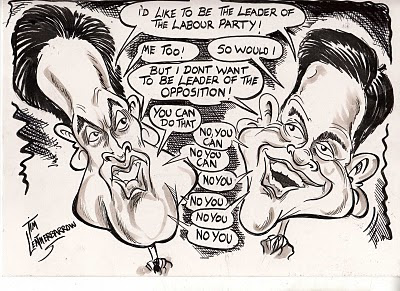 Apparently ED n' DAVID MILIBAND,arent only brothers, but are the best n' closest of friends according to the spin merchants n' publicity shit peddlars of the LABOUR PARTY, which undoubtedly means the brotherly shit is flying all over the floors and walls of the loving Miliband family shared appartments. The ruck is over which is going to take over from GORDON BROWN(remember him?).....The fighting was vicous until 'the penny dropped and it suddenly occured to them that they weren't fighting over 'Gordo's 'old job which happened to be PRIME MINISTER of our once great nation. The post was now a little lower down on the political scale. Only LEADER OF THE LABOUR PARTY!....Which wasnt a bad job description to drag around. Then the second realisation hit them. They would be in charge of the losing party of the General election, which meant that the post they were fighting over was non other than ,LEADER OF THE OPPOSITION....That is basically political speak for The loser in charge of the losers, or Chief Loser. Considering the strange state of affairs after this election, Hung parliaments, etc. Normally the goverment side sit alone and the congealed mass of other parties sit opposite in opposition. But it seems now the goverment is the congealed mass of other party members in what has laughingly been called a coalition. They all sit there giggling at the poor old Labour party sitting opposite with no one to talk to.

This situation has the two loving brothers still arguing,but each wanting the other to take charge. Even if the opposition is the easiest job in the world. All you have to do is disagree with absolutly everything the goverment say. You dont have to plan policies at home at night for the following day, just turn up and 'wing it'. The brothers have their pride and want the other to take the fall and lead.

Posted by Tim Leatherbarrow at 12:04 No comments: Links to this post 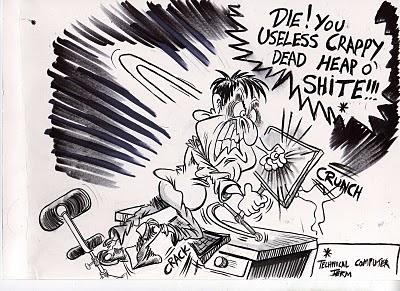 Some of the sharper eyed of you out there will have noticed the more than usual irregular examples of rantings and ravings and all round blatherings lately. This is partly due to a severe case of pure unadulterated bone idleness on my part. But when ,with a superhuman burst of effort i dragged my lazy arse to the drawing board and got to it. When i'd finally produced something. I'm not saying it was worth the effort of producing it, or, for that matter of reading it. But it took time so that was your lot. wether you liked it or not. I sat at the computer to post the rubbish on the blog. But the computer just wasnt having it. I'm no fan of computers but a critical computer! I'm not standing for that. The internet and world wide web,etc,etc are very wonderful and clever things. The whole planet connected by photons and electrons whizzing about at almost the speed of light. Except here. Our computers photons and electrons dont so much whizz as move with the speed of a peanut sinking in a bowl of porridge. In our hi- speed age ,our computer harks back to a slower more relaxed time .

The slow workings of the computer can be forgiven, as me n' it are very similar and are alike in lots of ways. But what drives me up the wall is when it comes to a dead stop. As the computer screen freezes and i cant change pages ,move it up down across or shake it all about. Its inanimation gets me animated, into a totally psychotic rage .Where i want to smash and destroy and kill this already dead machine 'stone dead'. Then theres a slight flicker and the damn thing works up until the next hiccup. It has become a battle of wills with me n' the computer. If for a moment i let my guard down and show satisfaction with the computers progress. It will pounce and cut out on me. I have to intimidate it from start to finish. I sit in front with a CLINT EASTWOOD squint(Post DIRTY HARRY mid 1970's, best Eastwood squinting years.) and hopefully i'll get lucky with that punk computer.

Posted by Tim Leatherbarrow at 14:59 6 comments: Links to this post

IN WHATS LEFT OF OUR LIVERPOOL HOME;WE SPEAK WITH AN ACCENT EXCEEDINGLY RARE;LIVE UNDER A STATUE ,EXCEEDINGLY BARE,WELL WE DID ,BUT HE'S GOT TO GO... 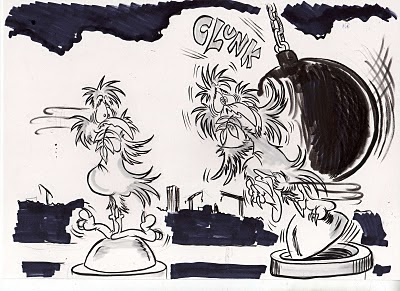 AND THE LIVERBIRDS COULD BE THE NEXT TO GO!
One of the most wellknown sights for anyone going into the fair city of LIVERPOOL, is the LEWIS'S DEPARTMENT STORE. Stood there standing, through fire, wars ,blitz, depression, and a variety of other things guaranteed to ruin anybodies day, since the 1850's. Throughout its history it has had a whole record of firsts and biggests, etc .And is basically beloved by scousers going back generations ,wether they be customers or the remarkably loyal and faithful staff. The other main landmark ,esspecially for the kids, was the 'nudie man' standing proud and semi erect over the front enterance. The people who commissioned it and the artist who sculpted it, called it LIVERPOOL RESURGENT. But to the people of Liverpool, he's always been DICKY LEWIS. The pavement under Dickies knob is the most famous meeting spot in the city. Lads n' lasses waiting for their dates. Myself included. Sharing the experiance with the likes of JOHN LENNON and CYNTHIA.
But it has been decided by the powers that be ,who, As we all know, their only thought is for the people and character of Liverpool. The councillors and the property developers who think that the old buildings in the city should be replaced by yet more shopping malls. Tiled floors ,Costas ,Starbucks and as many cloths shops as can be forced in to the new shopping/leisure facilities. Apparently, they plan to bung in a few skyscrapers into the surrounding area. A couple of towering glass tubes ,bound to draw the tourists into see the famous port of Liverpool. I like old buildings;old towns and old shops; I like old back streets and old back street pubs. I dont see why it all has to go to make way for "change!". Liverpools most famous landmark, after all is ,basically a back street and a couple of back street pubs. And a basement club called THE CAVERN.This was originally demolished by some genius. The empty space stood empty for years. Until another genius decided they'd build an exact replica, but a few feet to the right. All this to a certain four man beat combo called the BEATLES.Who,played and drank in MATTHEW STREET. The Beatles, incidently used to play at staff parties in Lewis's. They played on the roof ,as well,long before the ABBEY ROAD ROOF. And Sir MACCA was a delivery boy for them before he threw it all away and joined a band.
Posted by Tim Leatherbarrow at 14:27 10 comments: Links to this post

PETE TOWNSHEND CANT HEAR ONE OF THE LOUDEST ROCK BANDS IN THE WORLD AND HE'S THE LEAD GUITARIST!!!! 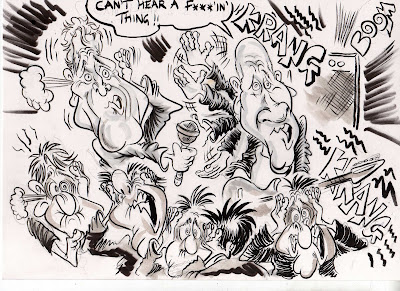 Shock, horror and aghastness abounded as i ambled along the magazine rack in Asda the other day. I avoided all the Katie Price and Alex Reid stories and stumbled across a headline in one of the music mags. Basically it was ROGER DALTREY saying that 'cos him n' PETE TOWNSHEND are both 'shagged out' and...(this is where the shock n' horror an' agahstness really kicks in!)...THE WHO MAY HAVE TO STOP PERFORMING!!!!...
Roger has trouble with the voice, but has managed to overcome that as his apparently triumphant performance at the R.A.C.(No, not the car people..the ROYAL ALBERT HALL..if you dont mind!)..of QUADROPHENIA. But he's also having hearing troubles. But not as bad asthe almost deaf Mr Townshend, who's tinitus may be beyond repair. So one of the loudest guitarists in the world could be playing ,blowing the eardrums of stadiums full of fans and not knowing if his guitar is plugged in.
THE WHO were officially once registered as the loudest band in the world. I think it was a concert at CHARLTON F.C.( Probably the only thing Charlton fc is famous for.) The noise, apparently was the equivalent to five atom bombs going off in your living room. If your standing three feet in front of the speakers producing this cacopheny of sound, i'm sure the ol' tympanic membrane (ear drum ,ya ignorant gets)...aren't built for that kind of hammering.
The other possible cause for Townshends ears was the famous filmed version of a performance of MY GENERATION, on American telly and at the climatic instrument smashing end, KEITH MOON thought it'd be a bit of a wheeze if he dynamited the drum kit. Which he duly did. The explosion knocked Townshend sideways across the stage and was reputed to have added to all the other drum wreckage across the stage a set of perforated eardrums belonging to poor ol' Pete.
The other probable cause ,which is a lesson in this MP3 n' all that stuff age. Its been said that Townshends lug'oles have taken a hammering from earphones over the years in the recording studios, etc. Its not suprising really. The old earphones were cushioned and 'clamped around the head. Whereas the modern earphones actuall bore deep into the ear cavity. The noise can still be heard from the far end of a train carriage. I dont know which is the more annoying the actual ,being able to hear the music being played;Or the buzzing ,when you can hear the noise, but not make out the track. Yes, i know i'm a moanin' ol' fart, i've a loving(?) family that constantly remind me.
Posted by Tim Leatherbarrow at 16:22 19 comments: Links to this post