IF YOUR NUCLEAR FUSION REACTOR'S KNACKERED I CAN HELP, BUT IF YOUR TOILETS BUNGED UP YOUR KNACKERED ,I'M SORRY ! 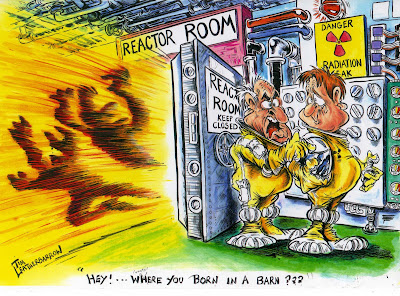 Most people know somebody who can 'do jobs'. Y'know plumbing or a bit of 'Elekky' jobs around the house, and so the list goes on. I know a few lads like this , but i've gone further. I've moved foreward into the 21st century social circle. A world where people don't rely on plumbers and basic 'elekky' skills but are much more advanced. I have a cicle of friends and aquaintances who are nothing less than NUCLEAR INSPECTORS. So, if you have any troubles with your cold fusion reactor in the years to come, give me a shout .'I know a fellah, and a woman, who can sort you out'. If your toilets bunged up ,or the telly's not getting channel5, or something, i wont be much help to you. But if your nuclear power station is giving you problems, give us a shout.

I'D PREFER TO BE HIT WITH INSPIRATION, BUT A MILD POKE OR A GENTLE NUDGE OF INSPIRATION'D DO,AT THE MOMENT !! 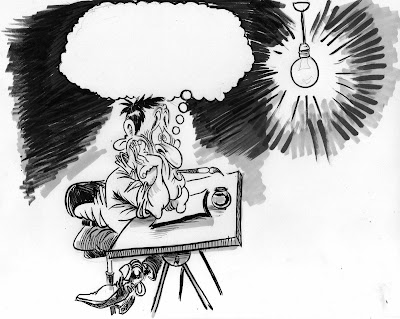 Mon apologies all my followers n' fans out there in madbadninkyland for the certain lack of communications over the last week or couple or three, even , that all its been ,my you are an impatient lot! I sat at the computer ready for the torrent of creative jibberish to come flooding out....And waited.....And carried on waiting......But the expected torrent, the creative tsunami caused by the slipping and grinding of the brains stressed creative fault lines didn't happen. Does this mean that the disturbed brain that i rely on has settled down to a calm settled state. Thats wonderful if i'm a zen monk gazing at a cave wall for 30 years, but a bit of a bugger if your a blogging cartoonist.

Right so here we go , back to forcing jibberish and rubbish from the nooks and cranny's of my infertile imagination. I'l see about going to see a therapist. Not to cure myself of psychological disorders. But to see about 'getting' a few psychological disorders. This will cause the pressures and strains to build up on my brains creative fault lines and cause creative brain quakes; Tsunamis of the imagination, and the usual rubbish......

Posted by Tim Leatherbarrow at 15:08 3 comments: Links to this post

DAVID CARRADINE HUNG BY THE NECK N' NUTS, BUT WHERE WAS HIS FLUTE ? 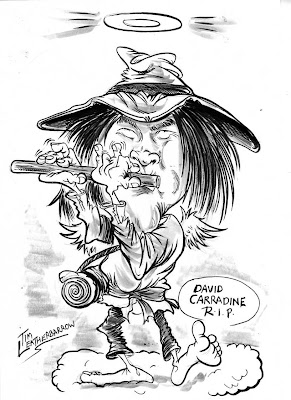 Aaaaah!.....What a world we live in. When i was 'nobbut a lad', in the 70's ,i loved the stories of a scruffy bare footed half chinese fellah walking around the wild west booting the hell out of the cowboys who always seemed to pick on him for walking into the saloon in mainstreet 'Deadmans Gulch' and asking in a barely audible whisper for" a glass of water, please. " This was , of course David Carradine, as rogue Shaolin monk Kwai Chang Caine, in the wonderful 'Kung Fu'. Made me the man i am that telly series did. I can often be seen walking around Warrington in bare feet, but broken bottles and police warnings have curtailed my monkish wanderings of late, the world we live in i'm afraid. But while i was away on an S.A.S. -Like endurance test, that was a family holiday in a caravan in Wales. I was informed by my old hairy mate Guy Carter and proud owner of a boxed dvd collection of the Kung Fu series(as am i.), of the death of David Carradine. He was found hanging in a Bangcok hotel cupboard by his neck n' nuts. Apparently as pop stars and movie stars aren't satisfied with a 'swift one off the wrist'these days. The beautiful people, they shove apples in their gob;A noose around their neck, and ,apparently their cobblers, then step off the stool? This gives them 'extreme satisfaction', shall we say. But it does seem to go wrong for a lot of the time ,so if they do die,it's with a big smile on their face. But the smile on their face is to make room for the massively bloated purple tongue sticking out of their mouth.

I can only imagine Kwai Chang Caine would never have done such a thing, but you never know. Carradine was deeply 'into' Kung Fu' ,Tai-chi, Chi-gong and various associated philosophies like his alter-ego Caine. And, apparently trained and studied with the Shaolin monks. So, what are they teaching nowadays at the Shaolin temple and if Caine had of committed an act of Auto-Erotic sex, where would he have stuck his flute? 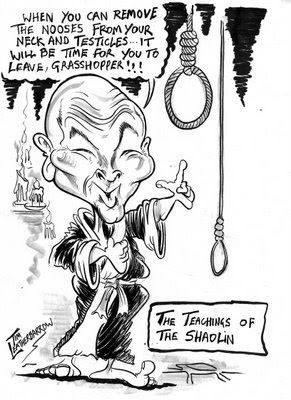 Posted by Tim Leatherbarrow at 14:31 7 comments: Links to this post