ONLY PRESIDENT FOR A FEW DAYS AND TERESA MAY FIRES A TRIDENT MISSLE AT 'OUR CUZN'S ACROSS THE POND! :...TIM LEATHERBARROW

Ah well its happened! A certain MR DONALD TRUMP, A multi billion, trillion quinti- squillionaire of the parish of Manhatten New York has gone from being possibly the richest most powerful man in the U.S.A. to being .....The richest most powerful man ...In the U.S.A. Only the President, but wether the president is the most powerful man in the states is debateable, he's the face that gets to shake hands around the world, don't know if he actually does anything, rather like our prime minister, as we all know who do fuck all . Any politician would know the best place to be is 'IN OPPOSITION!', as on the other powerless side of the house ,you don't actually have to do anything just slag off everything the goverment haven't done, but are proposing to do, the trouble starts if you get voted in.

Theres worried talk about the breakup of the EU and TRUMP being less than a fan of NATO, so the RUSSIANS are happy with the possible break up of those two  exclusive clubs. Will the cold war 'heat up' again?....Will the arms race start up again? The British wont be caught out , thats for sure so to show we don't take shit off anyone ,even our close allies and cousins we fired a TRIDENT MISSILE at the UNITED STATES....Trump wants America to be great, but TERESA MAY  might be  kickstarting THE BRITISH EMPIRE again ,i'm expecting my call up papers any day soon..... 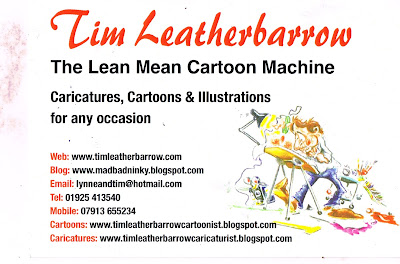 Posted by Tim Leatherbarrow at 16:24 No comments: Links to this post

TIM LEATHERBARROW: DONALD TRUMP THE GORGON!!!....HAIR WITH MINDS OF ITS OWN ON A NIGHT OUT IN RUSSIA! 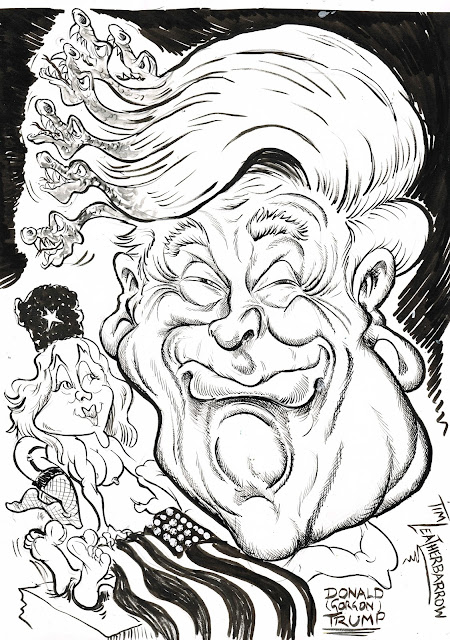 The whole world hates the American presidential elections as they last , so it seems longer than the term that the existing president gets to spend in the White house after winning the last 'slog'!...Boring as shit! is a good description of the whole 'circus', but for a reason i cannot fathom the Yanks love it and like a Supergroup rock tour they have political rallies filled with flag waving screaming fans????....I honestly wouldn't turn my head to look at any British politician if they walked past in town , i genuinally hate the slimey bastards.

The whole world has been thrown into chaos ,not by two people, but by one man. Hilary Clinton is an experianced politician and has flounced arounds the corridors of power for years under various presidents ,even her husband, who had a few other WhiteHouse ladies under him as Hilary was over him ,i can't imagine her taking orders from the hubbie.

No, the force of nature was a hairpiece with minds of its own like the mythical GORGON atop the head of a certain DONALD TRUMP, possibly the most powerful buisnessman on the planet. He virtually ran the country ,so thought "Gee!..Why not go the whole hog!" and actually run the whole sheebang!?

Politics n' politicians are all the same and all faith has been destroyed as each candidate and party change, but nothing else changes. If Hilary'd got in i doubt things would've changed much, but one thing about Donald is that there will be change, wether that change is good or bad is yet to be seen. The man is totally un-P.C. and offended lots of people and angered all kinds all over, the political version of the atom bomb. He's an opinionated hard nosed buisnessman and isn't afraid of confrontation. He has no speechwriters, etc, he's quite happy and visably enjoys facing the press and announcing to anyone his intentions on Twitter, i think it is amazing !

Attacking immigrants ,building walls to cut off mexico and all points south; Building up nuclear weapons?...Wether the yanks actually reduced them to levels they claim is debatable, the US are the most paranoid n' Xenophobic nation on the planet, the Chinese n' Ruskies are definitly not angels, but those military medal clad nutters who run the place are just as nuts as those in the Pentagon. Trumps a hard man and knows power and control , he'll be right at home. Politics over the next few years should be ,shall we say interesting?

A mercenary ex British M.I.6. man reckons the Russians are hacking n' blackmailing Trump and American political stuff with film of Trump haven't naughties with Russian ladies in Russian hotels, etc, but Trump came out thouroughly unflustered and denied it all pointing out he realises that he's a target for foreign intelligence and most hotels etc he stays in on foreign trips theres been cameras set up and asked "Am i stupid enough to do all this while being filmed?", he may have a point. Whereas most politicians would crumble under these 'allegations' and resign to 'Do some gardening!', It's just another day at the office for DONALD TRUMP !

Posted by Tim Leatherbarrow at 17:12 2 comments: Links to this post

TIM LEATHERBARROW....HAVE WE ALL RECOVERED FROM ANOTHER FESTIVE GUT-BUSTING; BRAIN PICKLING ;FESTIVE SEASON.

Well thats that!....Another gut-busting ; brain pickling fortnight over with as the festive gluttony and piss-up is now done n' dusted. The decorations are down and the new year resolutions are starting to wither ,die and be forgotten as the new year builds up and our will power dies out.

Go on , admit it you were going to lose weight; go to the gymn; Read more books; Basically all the stuff you were determined to do the last 10 New Years!!!....Christmas is now over as all the christmas film channels on Sky have stopped ,but it does feel a little like its just starting as you watch all the programmes you've recorded over the weeks and they've still got the lead up adverts to christmas ,so theres people in party hats joyously cooking and pouring gravy over turkeys. I'm ploughing through the X-Files and Spooks and whizzing hi-speed between level 12 and 6 on the fast foreward on the remote and seeing blurred festive families and turkeys and kids playing in the snow. I then have to watch a little backwards a little slower as i fly past the beginning of the next part of the programme and have to rewind to get to the restart.

In the 'old days' programmes started with a theme tune and showing the stars then on it went. The breaks had 'End of part one', or whatever , then 'Part two', or whatever. Nowadays programmes just start and as it goes on for the next twenty minutes you get the names of producers, directors, etc and the break is just that...'Zip!'..Gone to ads. Likewise when it restarts ...'Zip!...Ads finish and instantly back to programme. A problem is that as you whizz through the fast foreward the ads before the reumption of the programme is some forthcoming programmes , even future episodes of what your watching so you have no idea when to press play again, so you'll end up half way through the next half unaware the adverts have finished.

But we had a 'good' un' while it lasted. Now i've got to get another 7 months stint of work around the other side of the world to help pay for the next christmas. The fine busy caricaturist month of December kicked off with nothing for yours truly, then a rush of work came through, oh joy be unrestrained thought i !........Then after knocking a few other gigs off as the dates clashed the originals decided to cancel, so i got a few , but nothing like it looked like being at one point, bastards!

Anyhow , one n' all hope it went well and the New year is a 'Blast', lets live each day as it's meant to be.
Posted by Tim Leatherbarrow at 16:33 No comments: Links to this post