IF RAMBO WOULD HAVE HAD A JOHNNY SEVEN NOBODY WOULD EVER HAVE BEATEN HIM! 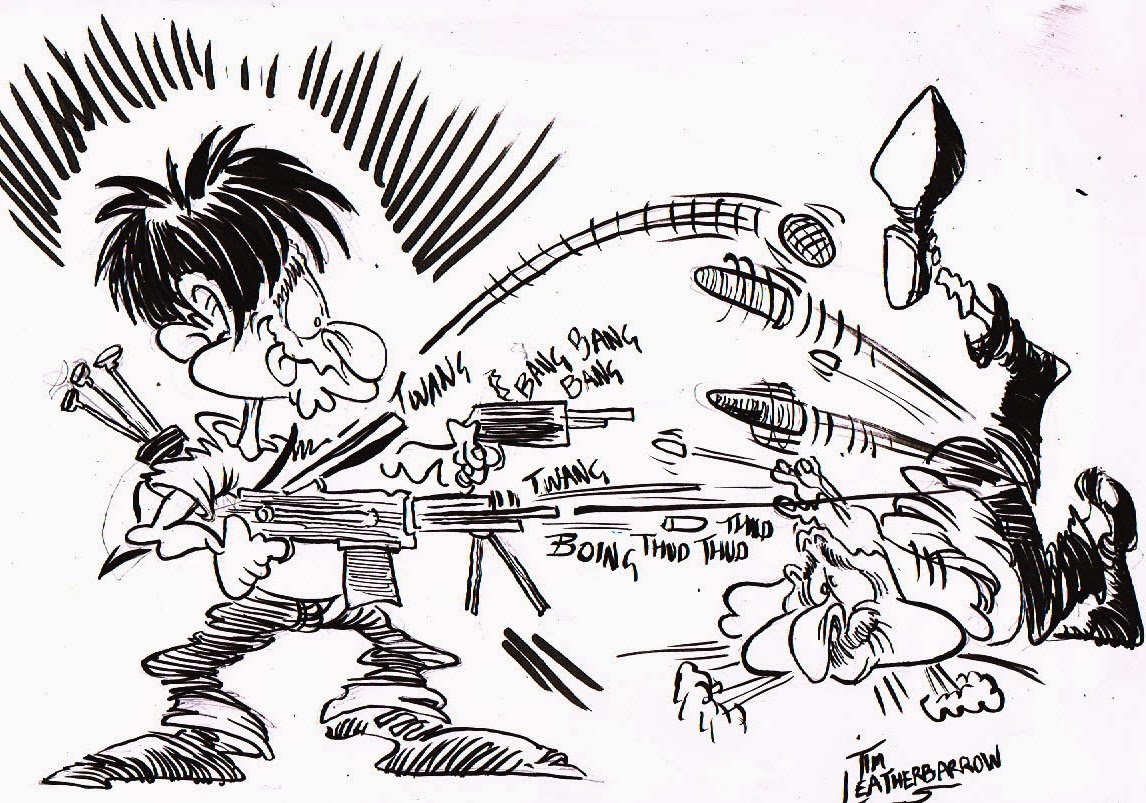 When i were 'nobbut a lad!' we had what were known as toys!.....Cars ,Guns ,Bown' arrows ,Action men and stuff that have my nostalgia juices running , now i'm at the age where my nostalgia is only matched by my angina!

Remember my JAMES BOND ,ASTON MARTIN DB5....Collectors will tell you if the toy is still in its box its valuable....Any kid will tell you any toy in its box has no value . The value was in the little buttons around the base of the metal ,not plastic,metal body. These buttons fired missiles; put up the rear bullet sheild; and of course ,how could we forget.....THE EJECTOR SEAT! 'THE MAN FROM U.N.C.L.E.' also had their car with a big discreet U.N.C.L.E. logo plastered across the bonnet. When you pressed a button NAPOLEON SOLO and ILYA KURYACKEN popped out of the window armed with a pistol. There was the 'CAPTAIN SCARLET' S.P.V.(Spectrum Persuit Vehicle) Complete with rocket launcher and a side opening door with captain Blue or Captain Scarlet sitting back to front as they drove backwards viewing through an internal screen.


In addition to cars of which i had a massive collection i moved onto rockets and had all the 'THUNDERBIRDS' when you rolled them on their wheels sparks inside red plastic cover over the back made it look like booster rockets. I even had a plastic 'STINGRAY' for playing with in the bath....You need something to play with in the bath!!!..?

Then, of course as all snotty little kids, i loved war and weapons .....I remember hitting my dad with a sucker tipped arrow on the side of his head causing him to pour the mug of tea he was carrying over himself....Oh how he laughed!

He didn't know how well off he was until they bought me the amazing JOHNNY SEVEN !!......It ws so heavily armed you could invade a foreign country with a one without leaving the living room or hall. They had everything....Missiles, rockets, bullets, grenades and a detachable pistol that fired caps loud bangs and the smell of spent matches fill my mind as i type this. There was various sized rockets ,all of which firesd with, it has to be said a fair velocity and hit with a good belt ,as my late dad could've vouched. There was a grenade launcher and a plastic bullet firing gun. If 'RAMBO' had had one JOHNNY SEVEN he'd have won a lot more wars!

Then we had ACTION MAN!!!!....Everybody goes on about real hair ,swivel eyes worked from a knob on the back of his head....No knobhead jokes ,notice ,i must be maturing, now i'm 54. And pull the string and he says all Action man manly military stuff, but this was the later model and was crap! It had hinged joints ,whereas the older model didn't have these added extras ,with painted black hair, but what it did have was elasticated ball and socket joints so you could literally position the figure in absolutly any position your warped young mind could envision.....In fact we had a ball in shops twisting Action Men into disgusting sexual positions as those nasty little puberty  teenage hormones started 'kicking in!'....But he had all uniforms and guns and even had a Mercury style space capsule....We explored the universe and fought wars without leaving the living room or the staircase .

Lest we forget in those days we used to interact with other kids of our age and the family ,we got our racing bikes ,i never got a 'Chopper' ,in fact nobody i knew had one ,there was a few 'moonhoppers 'bouncing around the street and a few resultant cracked skulls....We had a few leather caseballs and played a lot of footy on the park as well as some violence orientated games involving getting chased then getting the 'living shite kicked 'outta ya!'....

The next game we discovered wasn't very succesful...GURLS(hem ,hem)....The occassional snog at the youth club disco!!!!.....So we moved on....Discovered DRINKING!...And games and playing was replaced by 'PLAYING AROUND!'..Which i still dabble a little with even now.

I see kids and i never see toys ,as such as we all know all the want is an i-pad ,telephone ,texty, bleepy thing ,or whatever the hell is 'it' at the moment. I spoke to my family when i had my toys ,i spent a lot of time alone with the greatest toy of all my imagination !....The horrors are enschonsed in their bedroom for months on end and don't speak on the occassions you pass on the landing or in the kitchen, possibly a grunt ,if your lucky(?)...Never mind contact , most parents have forgotten what they're sweet little angel even looks like! 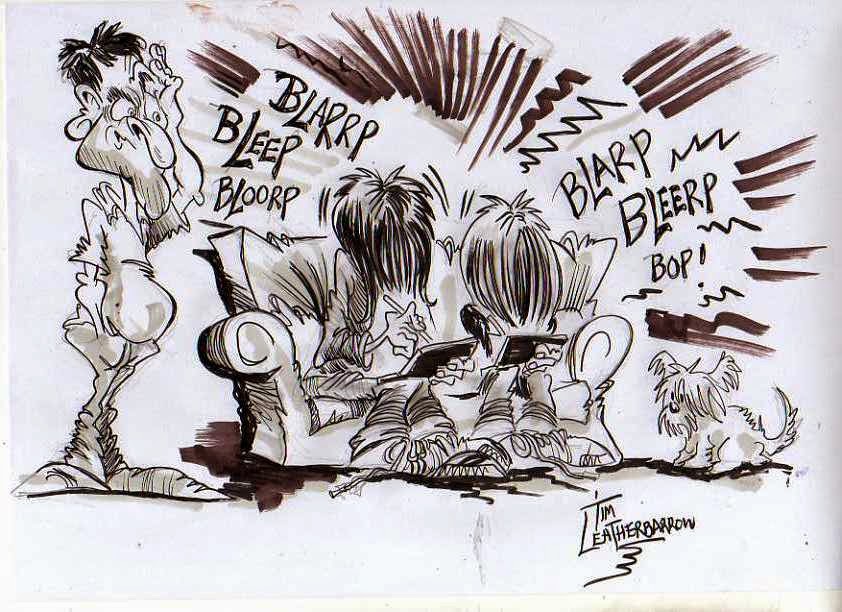 Funnily enough ,maybe its my memory playing tricks ,but it seems boys had the fun on the toy front. Girls had yukky girlie things like dolls .....Action man was not a doll !!!!!...But they make up for it in their later more informative ,intereting years and here we fall into the realm of the sex toys...The various chains that specialise have achieved a respectability ,having shops in your average shoping mall / centre...Or women getting the drink in and having house sales evening for the 'demonstration' of a variety of oddly shaped ,knobbly ,sometimes electrical vibrating 'thingies' some of which require the various scented lubricants also supplied .You also get uniforms to dress up and handcuffs ,so you can play cops n' robbers.......They must have a lot of fun these ladies....Your never too old to play with toys!

Posted by Tim Leatherbarrow at 15:57 No comments: Links to this post 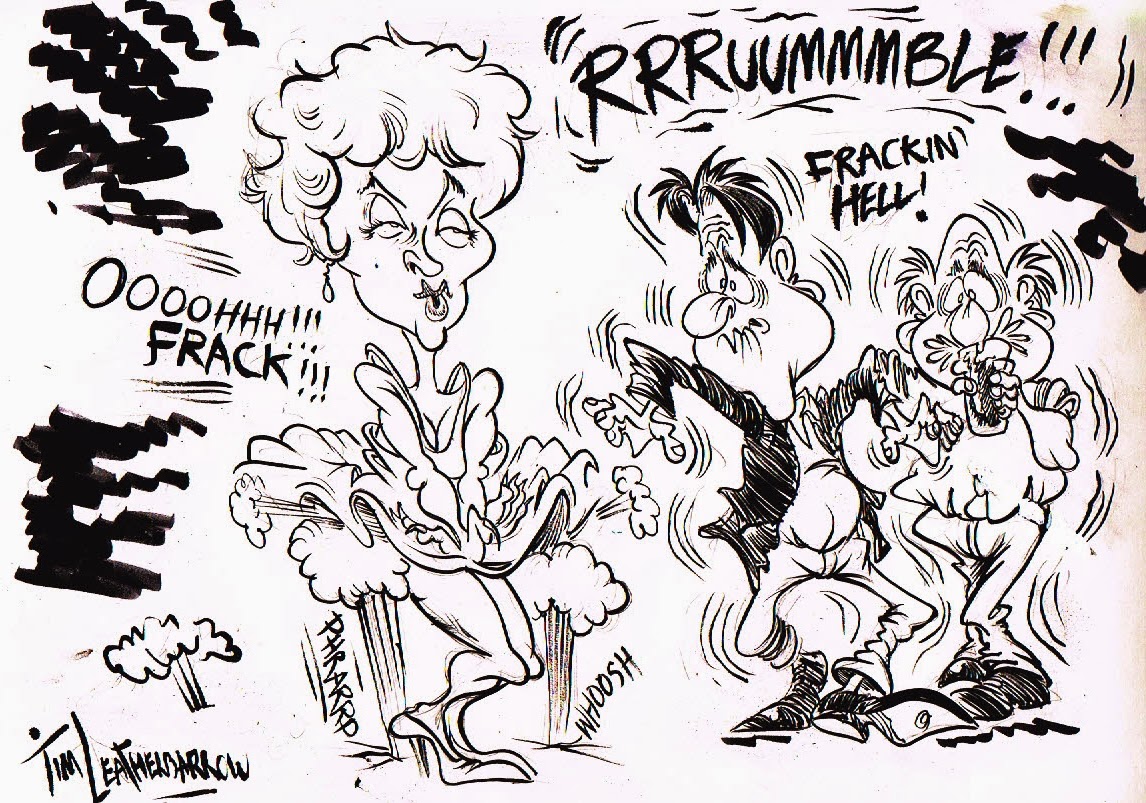 When you go out on a night on the'razzle' us Brits tend to go for it in our time honoured fashion which, basically consists of going into a crowded room and guzzling as much drink as is inhumanly possible. The beer consists of two types, basically ,lagers which are gaseous and the darker thicker stouts which are sludgey!!!.....Wether we force gaseous liquids or thick sludge under increasing pressure into our system ,after a bit ,in it's own special way the body starts to make its discomfort known in a variety of recognisable ways to both the person involved and ,unfortunatly for those sharing their company.

The symptoms of this physical rebellion against high pressure liquids and gasses forced into the body consist of the emission of high pressure noxious gasses, commonly known as 'farts!'...Rumbling guts and the high pressure emission of the bladder and ocassionly the stomach contents. Not pleasant at all!

But somewhere a scientist sliding down a toilet cubicle wall after the suffering described above put the hard learned lessons to good use and developed the theory that would lead to the process known as FRECKING!

In theory if you force high pressure liquids and gas into anything ,something has got to give and something will come out the other end????

So one day up in the drinking capital of the country around the North West where we understand the principles involved in drinking to excess ,so FRECKING sounded like just giving the ground a drink ...Our green n' pleasant land has sustained us for long enough and deserves a wee drinkie!

So high pressure fluids were forced deep into the ground and like its human counterparts gas and fluids were emitted in the form of gas and oil, which to the politicians and fuel companies was 'absolutly super!' As pound signs filled their eyes and minds, so enraptured with the financial boom that the good ground had peed ,burped and farted out they were quite happy to dismiss the 'rumblings!'?

The boozed up lands 'rumblings' took the form of a mild earthquake!.....But it was only 'mild!' so , of course thats ok!....But considering the area isn't exactly 'The Pacific Rim ' not known for fault lines; Volcanic activity and general drastic seismic disasters suddenly has an earthquake after a good night on the 'Freck!'....Understandebly the locals who sat watching their cups n' saucers rattling on their shelves were understandebly perturbed by the ussually reliable floor suddenly taking it upon itself to bounce and rattle and even crack slightly. But ,of course those who know better reassured us there was nothing to worry about. Even when our cuz'n's in the U.S. reported a drastic increase in seismic house rattling ground shaking earthquakes due to increase in 'Frecking'....The yanks in charge are even more worse money grabbing bastards then our lot so the 'people' were ignored and on it goes!

As we all know we have a special relationship with 'our cuz'n's'......That means our goverment want to be quids/dollars in with the powers that be in Washington, so it would be in all our benefit to keep them happy and ,funnily enough an announcement was made for the go ahead for licenses to be awarded for Fracking operations to take place all over our green n' pleasant land.....They stressed that areas of natural beauty will be spared which leaves the rest of the country to look like those Texas oilfields with nothing ,but pumps and smoke and fire as far as the eye can see.

When you drink a lot you get a beer belly...I magine the country with one huge expanding beerbelly.....Probably around Birmingham ,which will rise above the surrounding countryside, a little like Yellowstone park which is swelling and one day likely to explode in a huge volcanic eruption.....Some say that Brum exploding wouldn't be a bad thing, but it would disrupt the hi-speed rail link ,the other bright idea!

When you see Marilyn Monroe with that draft up her gusset shot that could be happening all over as gas spurts up the new faults and cracks in our pavements from our constantly rumbling frecked out green bits and totally unpleasant land!

Posted by Tim Leatherbarrow at 12:59 No comments: Links to this post