WOMEN SHOULD WEIGH THEMSELVES WHEN A GIANT ASTEROID IS FLYING PAST THE EARTH ! 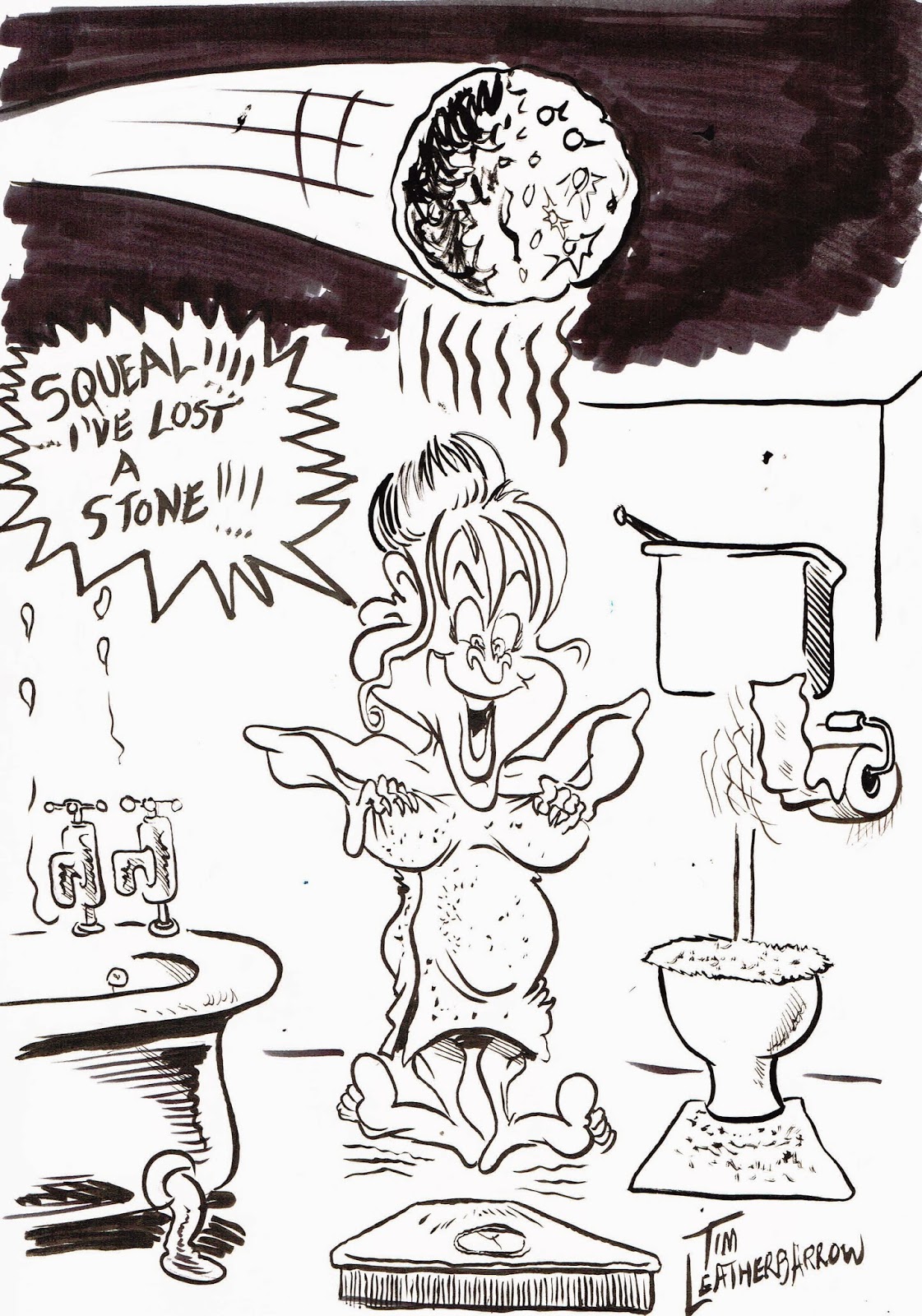 As every man on gods planet knows the lady in his life is always getting fat,putting on weight and weighing too much and has to lose a bit of excess baggage. There's no point argueing although you are expected to, if you disagree your talking absolute rubbish and don't have a clue what your talking about. God forbid if you agree your in dead trouble, my son!... So you can't win. The carpets around the house depending where they are show a little bit of wear and tear as they are constantly getting stood on. There is another really badly battered 12 inch by 12 inch patch that suffers from constant standing upon and that is the top of the bathroom scales in the bathroom. This is  where the love of your life peers intently studying the number of pounds or grams on the scales dial like a scientific experiment check of results to determine the difference from the last time they stood on the device only to normally have their heart broken and ego destroyed.

The Earth is a massive lump of rock and as Mr EINSTEIN told us massive objects have a suction pulling us in called GRAVITY. The planet is relatively circular and a womans weight would be roughly the same anywhere on the planet. But imagine if there was fluctuations in the GRAVITATIONAL FIELD ....If there was a country where the field was weaker and women weighed a lot less that place would be the most popular place for women to visit .....Due to this reason, the influx of weight concious women flooding this 'place '..There tourist trade would go through the roof, with the ladies and a few less weight concious blokes might find their way there for their own odious schemes and reasons involing the ladies. The other booming industry for this part of the world would be for BATHROOM SCALES...The ladies wouldn't be able to spend enough time on them.

On the odd ocassion a giant spinning lump of rock called an asteroid comes barrelling through the vacumn of space and skims by our beloved home planet. The asteroids are nowhere the size of the Earth , but a fair size and the odd collision through history has caused a mighty 'thwack' on the planet. One when the Earth was forming Hit the Earth and knocked a chunk out which formed our moon. Another destroyed most of the life on the planet ,mainly the dinosaurs. In the early 19th century an exploding asteroid flattened 500 square miles of trees in a huge forest in a region called TANGUSKA in Russia. Thankfully the destruction caused by this space debris seems to be falling ferocity and devastation ,in fact the effect of the next could benothing more than a slight effect on bathroom scales around the world!

As the asteroids pass as one did only the other day, it must interfere with the Earths Gravitational field, weakening it slightly....So if in the bathroom the drops from the taps seem to drip slower or the edge of the bog paper doesnt hang down vertically or is horizontally level or even drifting verticlly up these are signs of fluctuations in the gravitational field. So as the asteroid flies over your housing estate get on the bathroom scales and hopefully this force from space will have the weighing pointer dropping to the safe welcoming left side of the dial so a few pounds are lost due to these cosmic forces from millions of light years away, so for a while your excess weight is 'LOST IN SPACE!'.

You dont have to hold your tummy in waiting for another asteroid to come tumbling from the KYPER BELT on the outer fringes of the solar system intowards us in the cosy sun-kissed centre, we have our beloved moon which as it also pulls on the Earth it pulls the oceans up towards it ,thats what causes the tides....If the Moon can pull the Pacific Ocean up towards itself it can pull a few pounds off your bathroom scales.

Posted by Tim Leatherbarrow at 13:35 No comments:

TO LIVE LIFE TO THE FULL YOU MUST LIVE EVERY NIGHT SITTING FLICKING THROUGH THE SHIT ON THE TELLY CHANNELS AS IF IT WAS YOUR LAST! 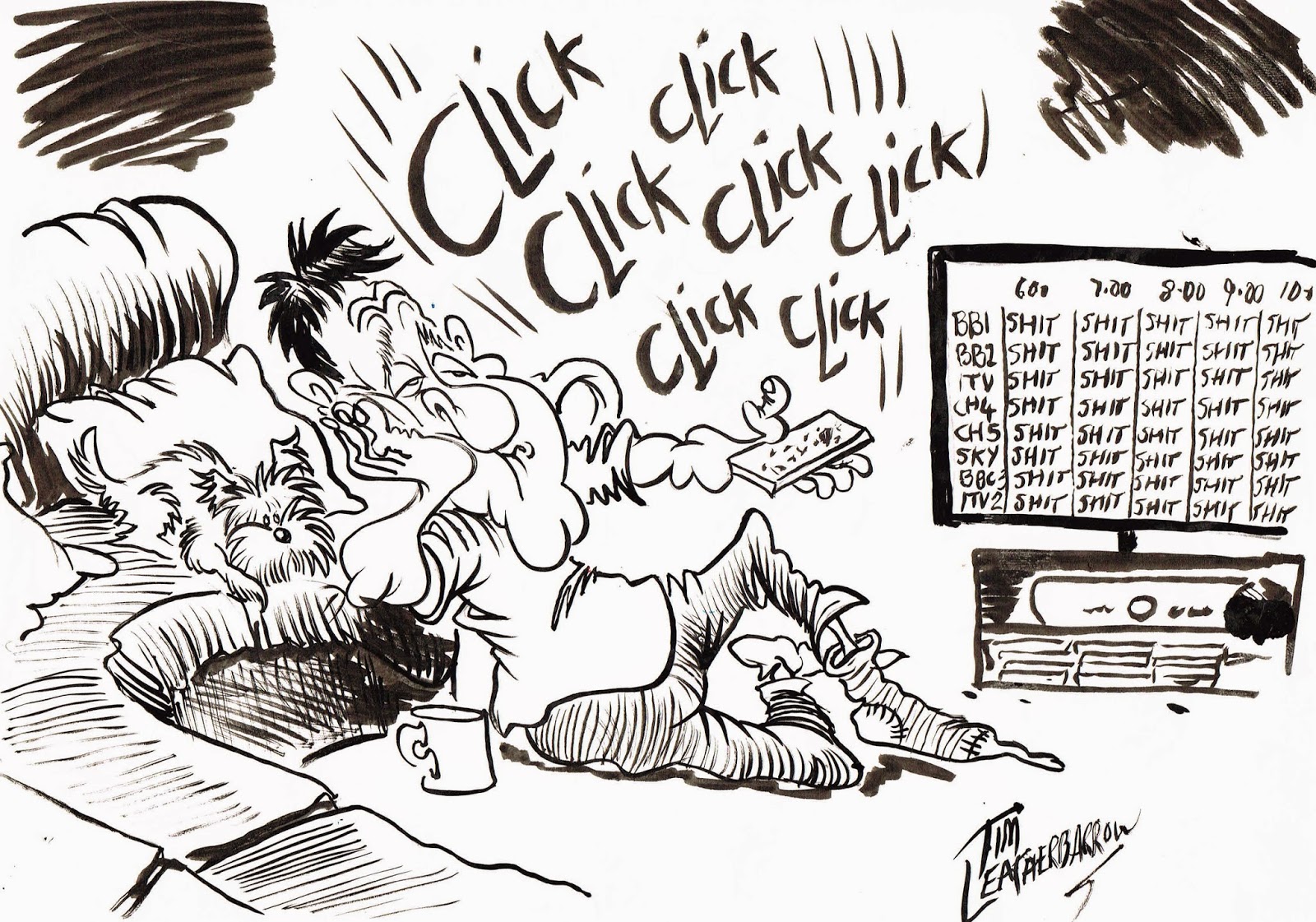 To live life to the full you must live every evening flicking through the shit on the endless telly channels as your last!
My missus the 'Lovely Lynne' works down in Birmingham all week and comes home at the weekend and quite often plays with the MANCHESTER SKA FOUNDATION band out and about,which she enjoys greatly, they are a popular bunch and have quite a following and are getting a lot of 'gig' work. The longest we spend together is going shopping at ASDA on a Sunday afternoon.


The Big 'Little 'un' is normally like every kid her age in another room ,texting away on phones or lap tops or ear phoned up so anything short of a nuclear explosion  wouldn't have a cat in hells chance of attracting her attention.

Me n' the dog have the living room to ourselves and the universe of choice that SKY telly has to offer....A mass of channels with absolutly nothing on,except some real shite. Now our telly has all the mod cons so i can record shite ;I can get shite ,on demand: I can buy or rent shite.

I 've even started reading again, normally it was just in bed ,but now in the evening , I feel like Ken Barlow on 'Corrie' as he is always sat reading a 'tome'.....I'm also ploughing through a heap of comics i have on disc...Marvel and DC ,but old stuff like TV21; VALIAN; LION;VICTOR and a heap of stuff  which have brought the schoolboy back out of this 54 year old fart and thats fine by me!

Me n' the dog sit together and discuss the affairs of the day ,i am getting worried as he's starting to make sense ,in fact more sense than me!

Posted by Tim Leatherbarrow at 16:39 No comments: 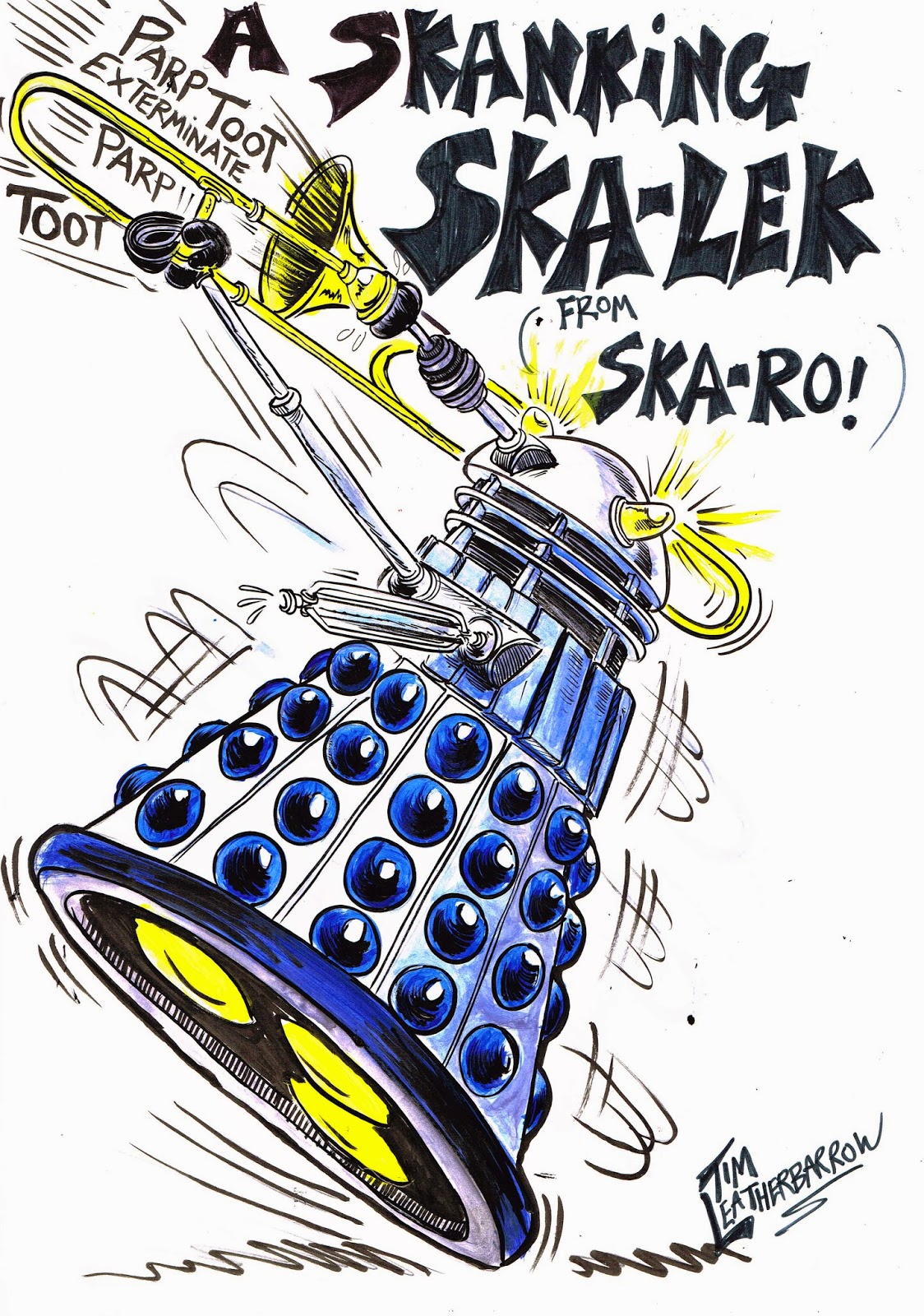 A wee while before the extreme excesses of the festive season kicked in proper i accompanied my missus 'The Lovely Lynne' to a very strange boozer in Oldham in manchester to see her and the rest of the hooligans and nutters that comprise the MANCHESTER SKA FOUNDATION play a 'gig'...The pub was called a very un-pub like name...AREA 51. Which as any UFO /X-FILES buff will know is where the yanks keep all the crashed alien space ships and flying saucers as well as their alien crew members who graciously help our transatlantic cuzn's to develop weapons based on alien technology. Whereas the real AREA 51 is in the middle of the desert, our AREA 51 was down a cobbled side street round the corner from some kebab and fried chicken shops which i wouldn't have been too suprised to discover had their origins in some dead alien crew members, i'm not too well up on how many alien ships make the journey across billions of light years to land in that region, but looking at a few of the people ....Quite a few!

THE MANCHESTER SKA FOUNDATION are a really good Ska cover band ,(MADNESS, THE SPECIALS,etc) and have a really good following who do follow them around quite big distances . I've gotten to know quite a few of them ,all lovely people, but totally nuts!...I looked to the side and there was a full size DOCTOR WHO'S T.A.R.D.I.S. I thought, "My the bands reputation is spreading!" I mean the good Doctor has Gasped n' Wheezed his way through time and space to get to a little back street gig.

Even more incredulous, alongside was a real genuine DALEK...It's true music can bring people together ,even eccentric time lords and gooey slimey globules with a sore throat and lousy singing voice that live inside giant pepper pots.

But the love of music didn't end there ,as alongside was a real CYBERMAN standing placidly by his worstest enemies in the whole galaxy

It didn't end there as alongside them minding his own buisness was 'ROBBY THE ROBOT' from 'LOST IN SPACE'.....He'd found his way through space ,but was lost in Oldham, don't ask me which is better or worse.  Oldham and the AREA 51 started to pale as it proved absolutly impossible to get served at the bar. Our interstellar Ska-Fans mustn't be drinkers as they placidly stood and listened to the 'gig', meanwhile there was almost mass 'Exterminations!' at the bar as people were trying and failing miserably to get served.

Although the T.A.R.D.I.S. was there, there was no sign of the DOCTOR. I think he was inside sulking....He'd travelled through billions of years , billions of light years and couldn't even get a bloody pint of GUINNESS at the end !
Posted by Tim Leatherbarrow at 14:46 No comments: