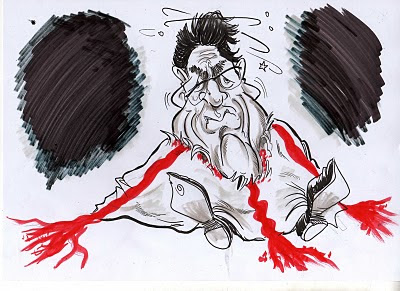 Posted by Tim Leatherbarrow at 15:01 8 comments: Links to this post 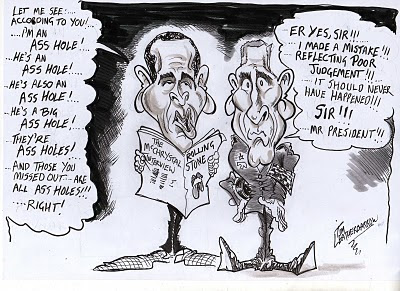 Its always good to see , in these days of uncompromising change that old traditions are surviving and are indeed alive and well. One in particular. The one that all American military men have big mouths. In times past they've had generals spouting off, chewing cheroots and walking around with pearl handled six guns. Not like British generals, of course. Mind you ,ol' MONTY wasn't backwards in coming forewards and his battles with our allied generals from across the pond was a lot more bitter and nasty then the battles he waged against the might of the German forces.
The boss of the AFGHANISTAN conflict was a certain GENERAL McCHRYSTAL. A quiet man, apparently. And with his background in BLACK OP'S, and SPECIAL FORCES,etc,etc this quietness could come in handy, blacked up behind enemy lines. But now he's a desk bound cigar chomping 567 star general he goes about his duties with his own war correspondant in tow. I never thought of ROLLING STONE magazine having a war correspondant, out side of Hollywood and the Oscars. But with the reporters in tow this ,obviously not so smart leader of men starts voicing opinions about his president and various suited and uniformed bosses in the white house and the Pentagon. I find it funny that all these unfairly berated(i'm sure) 'Sons of Bitches' actually read The Rolling Stone. A copy in the Oval Office and the War -Room of the Pentagon.
And so, our big mouth brave hero is summoned home, grovelling apologies, but, alas to no avail, as BALLCOCK O'BARNPOT(the Afro-irish president of the us)..Is a man reborn and revived, with the bit betwixt his big smiley pearly white teeth. He's fighting wars; Oil companies; The world economy,without breaking a sweat. One big mouth general who called him a name aint gonna give O'Barnpot any trouble ,oh no way, man! So as i type this rubbish Ex- General McChrystal is picking up his first dole cheque, or starting flipping hamburgers somewhere.
Posted by Tim Leatherbarrow at 19:01 27 comments: Links to this post 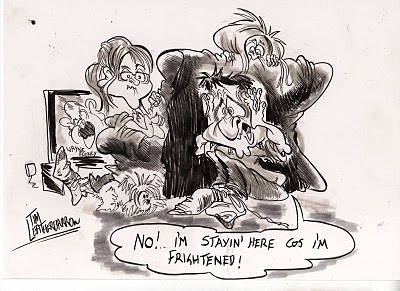 But much like the classic Doctor Who days, the boyhood fears have returned me behind the couch . When i sit to watch ENGLAND play(if thats the word). The acting is the same ,way over the top; Most of the game looks like certain defeat for our heroes,(and ussually is), as they run around screaming and shouting, like all the Doctors assistants: And as for the monsters and beasties, well, we've a few, well able to drive you behind the couch....Well! WAYNE ROONEY for a start
Posted by Tim Leatherbarrow at 16:07 33 comments: Links to this post

AAAHHH, IT MAKES YOU PROUD TO BE.....ALGERIAN ! 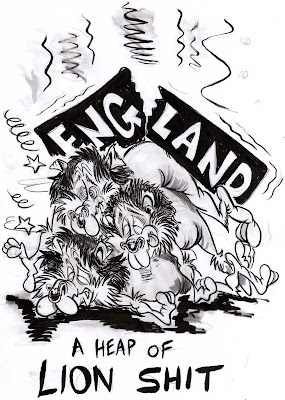 Posted by Tim Leatherbarrow at 10:46 5 comments: Links to this post 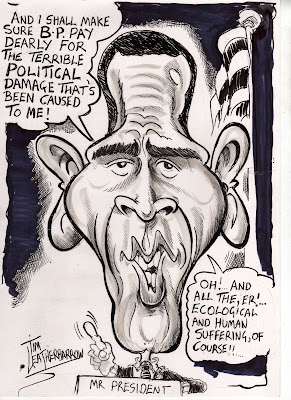 An American politician once said...."NEVER LET A GOOD CRISIS GO TO WASTE!"....

Theres a dark ,greasy, slimey,filthy,polluting filth filling up the Gulf of Mexico and it is understandebly upsetting the people who have to live and work in the reigion as they watch their livliehoods and ecological, natural landscape getting destroyed. And then you have the Dark, slimey, oily, greasy, filth that is American politics. Ballcock o'Barnpot( the Afro-irish U>S> president) has had some wonderful photo oppertunities out of this ecological catastrophie. And , the slavering morally determined mass of congressmen, who are up for re-elections in a few months want to be seen to be fighting for the suffering 'man on the beach'. O'barnpot, after getting a 'little' slagging off.("He's said too much too late") is getting tough and is going to get tough with them "Goddam Limey sons of bitches" at B.P. Or British Petroleum, as we once liked to call it,But O'Barnpot still likes to call it ,as often as he can squeeze it in to his televised blathering. I'm sure its nothing to do with building up anti British feeling in the home of freedom, democracy and moms apple pie. And while the resentment boils up ,if he can screw a few billions of dollars from B>P> and the British pensioners. Well, the electorate'll love him forever.(What was that about 'a good crisis?)... The strange thing is ,i was reading that the oil-platform that exploded and killed all those men and caused the oil leak, was supplied by a company called TRANSOCEAN. Who were once the finest supplier of deep sea oil drilling technology. They merged with an American company called SANTA FE,something or other.They're based in J.R.EWING territory of Houston, Texas. But since the Americans moved in and took over Transoceans reputation has plummetted worldwide. So, it seems to a naive sort, as my good self, that the Yanks have a lot of blame to shoulder in this oily sticky mess, as the platform and crew was theirs.

Posted by Tim Leatherbarrow at 17:17 38 comments: Links to this post 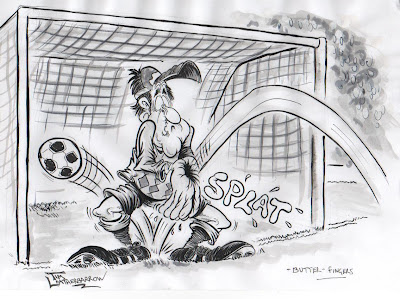 BUTTER-FINGERS!!!!
Everywhere i look ,there's England flags flappin n' fluttering, health and safety regulations allowing, of course. This is a wonderful show of pride and patriotism by the people of our great proud country. I have a lot of faith in the pride and belief of 'everybody' back here at home. The problem ,for me lies with the fact i've absolutly no faith in 'our boys' in the England squad. "C'mon ,Tim, give 'em a chance"thought i to myself and sat down to watch the travesty of a game against the USA, for christs sake. Then afterwards, looked out at the flags fluttering from houses and cars in our close and thought "Ah well, they'll be coming down by the end of next week."
But even after one of the all time goal-keeping 'cock-ups'; And half the squad of deadbeats chosen by our Italian 'gaffer' dead n' beaten by injury, its not all bad. Every cloud has a silver lining, they do say. And even at this time of National disharmony, pain and fear for the next few games and our increasingly slim chances in the tournament, this old saying is true. I was asked a few years ago to illustrate a book in Hong Kong, for the chinese, written by a Geordie lad, explaining various football sayings and expressions. As ever my moment of fame never came to pass and the artwork wasn't used. But after the England game ,this particular one , i think is particually apt.
Posted by Tim Leatherbarrow at 18:59 5 comments: Links to this post

ANSWERS TO THE QUESTIONS ,A QUESTIONABLE GUIDE TO THE LIFE ,THE ,UNIVERSE N' ALL THAT STUFF! 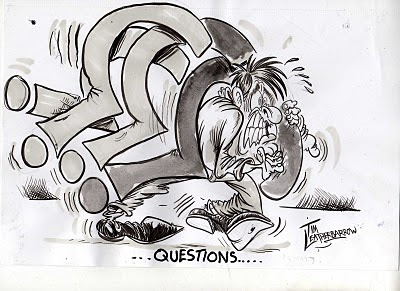 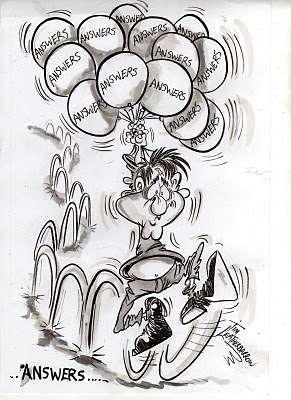 Gazing out into space, cos' you can see it from our back garden on a clear day. I wondered on the mysteries of life the universe ,smelly socks n'the intensity and frequency of skidmarks on underwear n'stuff n' everything of importance to our daily grind. I put my massive,if underused intellect to the problems and mysteries involved. After a while i'd solved half of the mystery of the cosmos. I'd worked out the questions.
WHAT..?
WHY...?
WHERE...?
WHEN....?
HOW...?
PHEW.....WHO WAS THAT....?
WHOSE ROUND IS IT....?
DO YOU FANCY A BIT O'..........?
WHERES ME KEYS.......?
Now having solved half of the equation all i needed was the answers, easy, no sweat......
ARE YOU DEAF,OR WHAT?
'COS!
WHEN DID YOU LAST HAVE THEM?
THEN
LIKE THAT
IT WASN'T ME
I GOT THE LAST ONE.
NO!..GET OFF N' GO TO SLEEP.
(couldnt find an answer to that one)

So, there you go all the problems that weigh so heavily upon our feeble mortal shoulders .Cause us so much stress,stomach disorders like flatulance and wind (stress farting is on the increase in our high pressure age.) Falling out hair. Go on havent you been slightly alarmed at the massive knotted clumps of hair blocking up your plug hole?....All those problems have been analysed and solved.You can all relax, now. When you understand it, life ,the universe n' everything, etc,etc is quite simple and straight foreward in a curved spacetime sort of way(except for the socks n' skiddies!).No, theres no need to thank me, i shall take my leave. I've solved everything and i haven't even had my breakfast, yet.
Posted by Tim Leatherbarrow at 14:14 5 comments: Links to this post

Labels: cosmos, life the universe and everything, space, stress 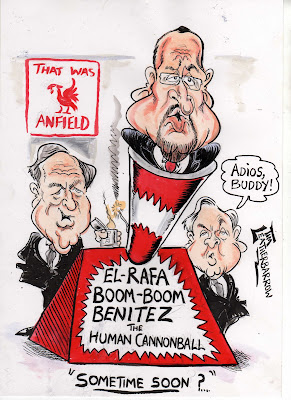 If you scroll back through the widom and deep penetrating observations of the insanity and inanity of our jolly lives in general,as pointed out and explained in this blog thingey. One of the 'finger on the pulse 'items was about the possible sudden exiting of a certain Spanish manager of Liverpool FC.....I frighten myself sometimes at my understanding and 'on the button 'prophesies,its almost paranormal, ESP, X-Files, etc,etc.........

Posted by Tim Leatherbarrow at 18:03 2 comments: Links to this post