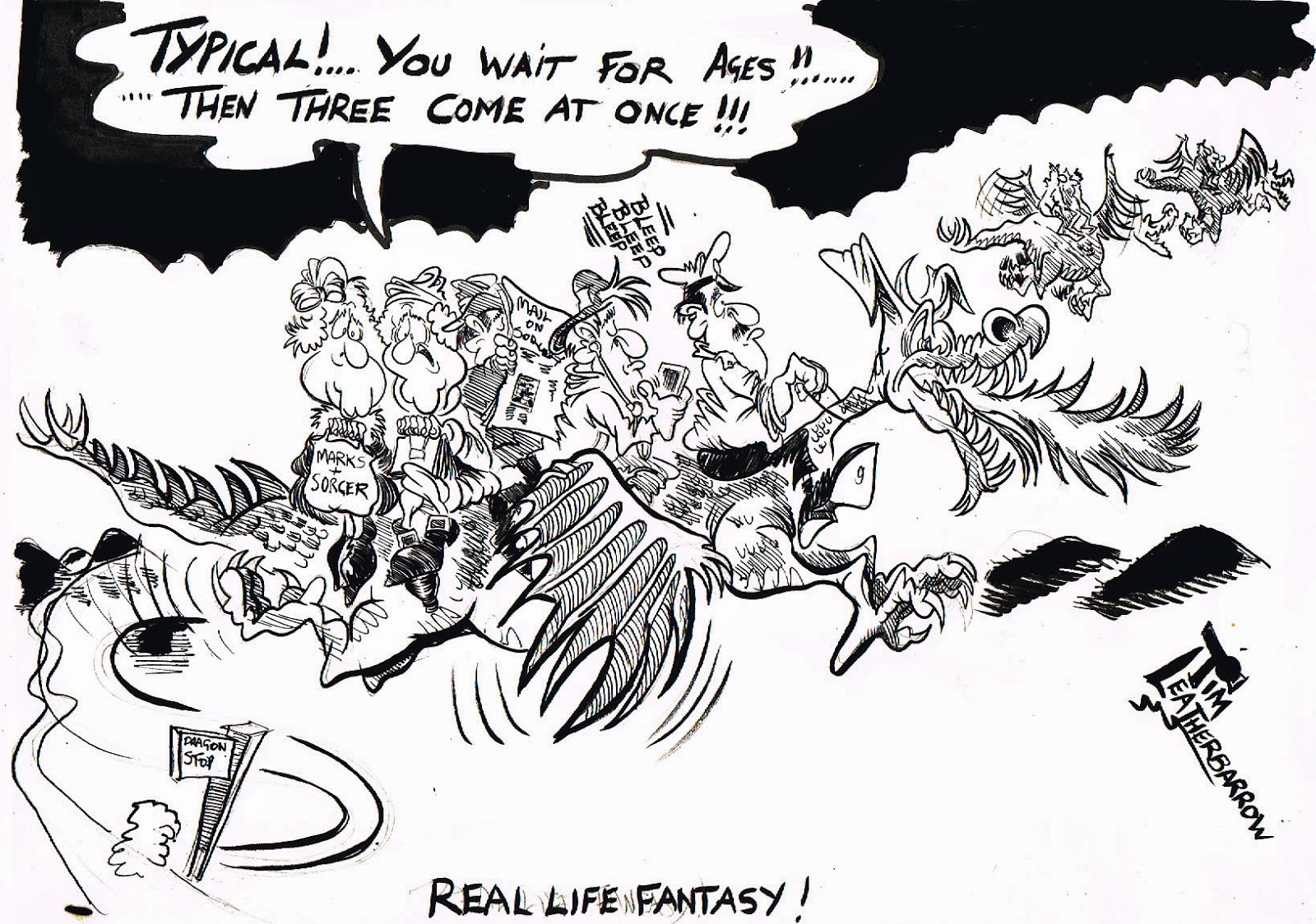 I have to admit to never being a great fan of  'FANTASY'....I'm more of a SCIENCE FICTION fan. SWORD AND SORCERY  isn't real life enough for me . I want ;Faster than light space ships ; Ray guns ; Horrible evil robots ; Gut busting aliens ; worm holes through black holes....You know all the real life ,genuine stuff backed up by science and technology. SWORD AND SORCERY ?...Well a time of wizards and demons ; Dragons and serpents and muscley half naked men and women roamed the barren wastes cutting other muscley men and women with swords forged from the metal forges of gods. God! There was lots of gods in them days. Every town village and fortress or city was full of gods , only outnumbered by the holy men and evil sects that worshipped them. The gods were very greedy in these times. All they seemed to want was lots of sexy ladies as human sacrifices and lots of jewels and treasure ,which seems reasonable enough!

The world of fantasy is very fond of swords and warriors. One of the most famous was ROBERT .E. HOWARD'S 'CONAN, THE BARBARIAN'. A big beefy bloke from the frozen "Eeeh it's grim up North!" wastes of CIMMERIA. But he came down south wearing animal skins ;Horned helmets and most important his massive sword forged by those unbeatable northern swordsmiths from unbreakable northern steel, which helped him as he was a bit of a bad tempered sort and picked fights with gangs and armies and more than a few dragons and serpents. He became a thief and tended to nick 'THE CRYSTAL OF THYTORACKACDACKODACK' or the DIAMOND OF SALOAMONDIPIDDTYDUDAH'. These juicey items were always guarded by beastly man eating beasts, so CONAN, being of a butch ,manly persuasion and having the beasts drooling had to fight and slaughter these devil beasts. Shouting to his own god, a guy called 'CROM!'....."By Crom i say thee nay!"...." And with this sword Crom will strike you down!" and lots of friendly endearing stuff like that, i read some of the books ,but i got most of my CONAN stuff from MARVEL COMICS.

MARVEL got into the fantasy stuff with CONAN and KRULL THE CONQUEROR and i think a couple of others. KRULL and CONAN made a few low budget telly series along with a very tasty 'well-proportioned 'Warrior princess ,whom you wouldn't want to get on the wrong side of ,XENA. CONAN was made into two quite big films with ,'Who else ,but ARNIE!', which weren't bad ,even with GRACE JONES in the second one. I don't believe for a minute ,even in the heights of fantasy CONAN/ARNIE could ever beat GRACE JONES....I mean JAMES BOND struggled!

The 'daddy of fantasy is ,of course 'THE HOBBIT' and 'THE LORD OF THE RINGS'.  I've never read them and i'm ashamed to admit i've never watched the films all the way through. I had a chortle the other day, tho'! I picked up a copy and opened it at a page and it was a wizard telling someone :"To cross some plain: until you reach the mountains of something , then cross the sea of wotsit and enter the forests of thingey!".....I dont know if this was for the rings or for a 'packet of fags ,a loaf of bread and some p.g. Tips, or something!'.....It just seemed to sum up it all up.

All the wizards did everything for the common man of which everyone was one and as his spells and potions did everything ,no inventions or technology ever shows in fantasy. Razors didn't exist as everyone had swords and daggers which were honed to razor sharpness and so they could shave. The only ones who didn't carry blades were the smart arse wizards who all had beards down to their feet. Thats why they carried those really long staffs ,not to fight with ,but to swipe the beards from round their feet before they tripped over their facial hair and went arse over pointy hat ! 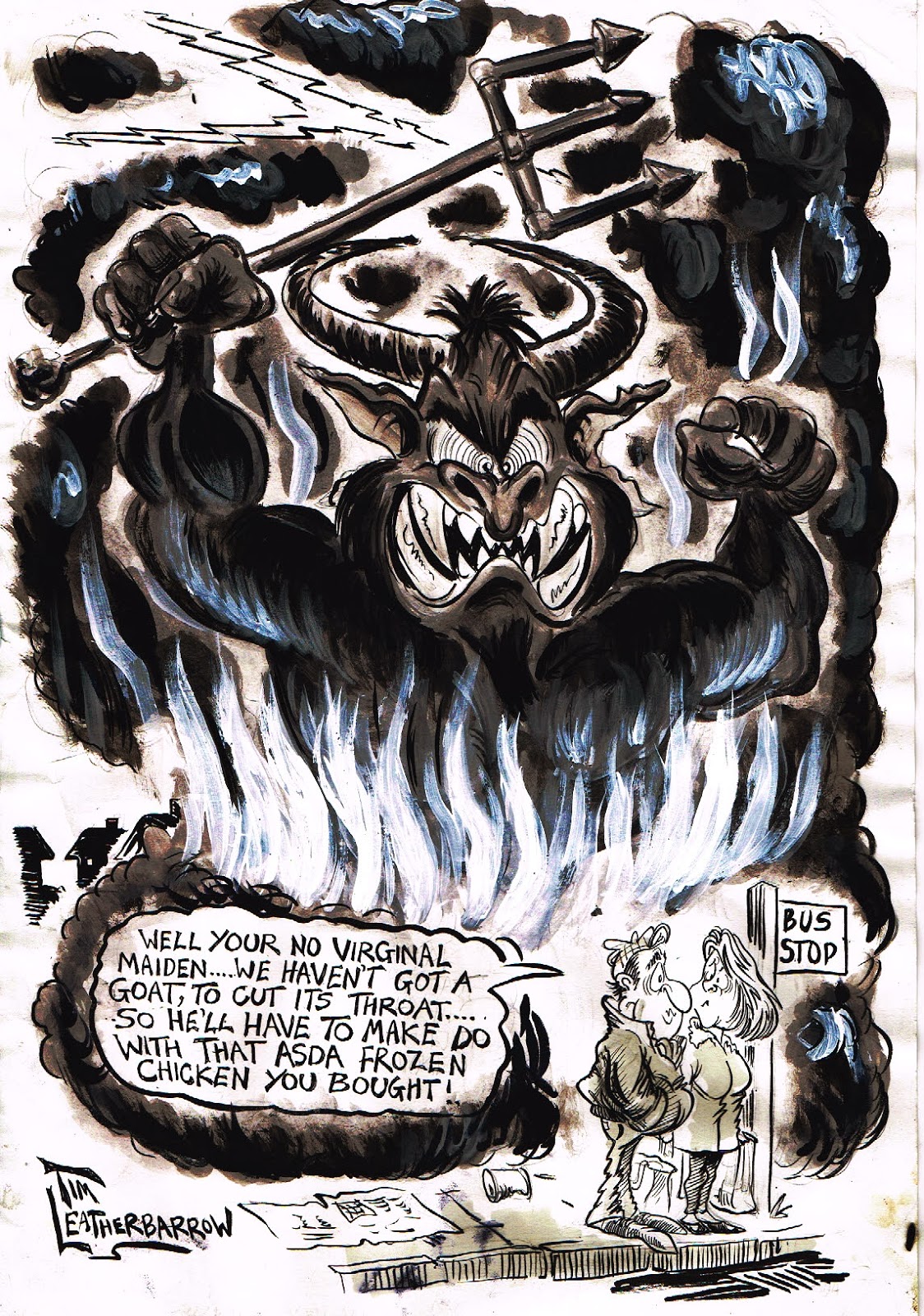 Posted by Tim Leatherbarrow at 16:49 No comments: Links to this post 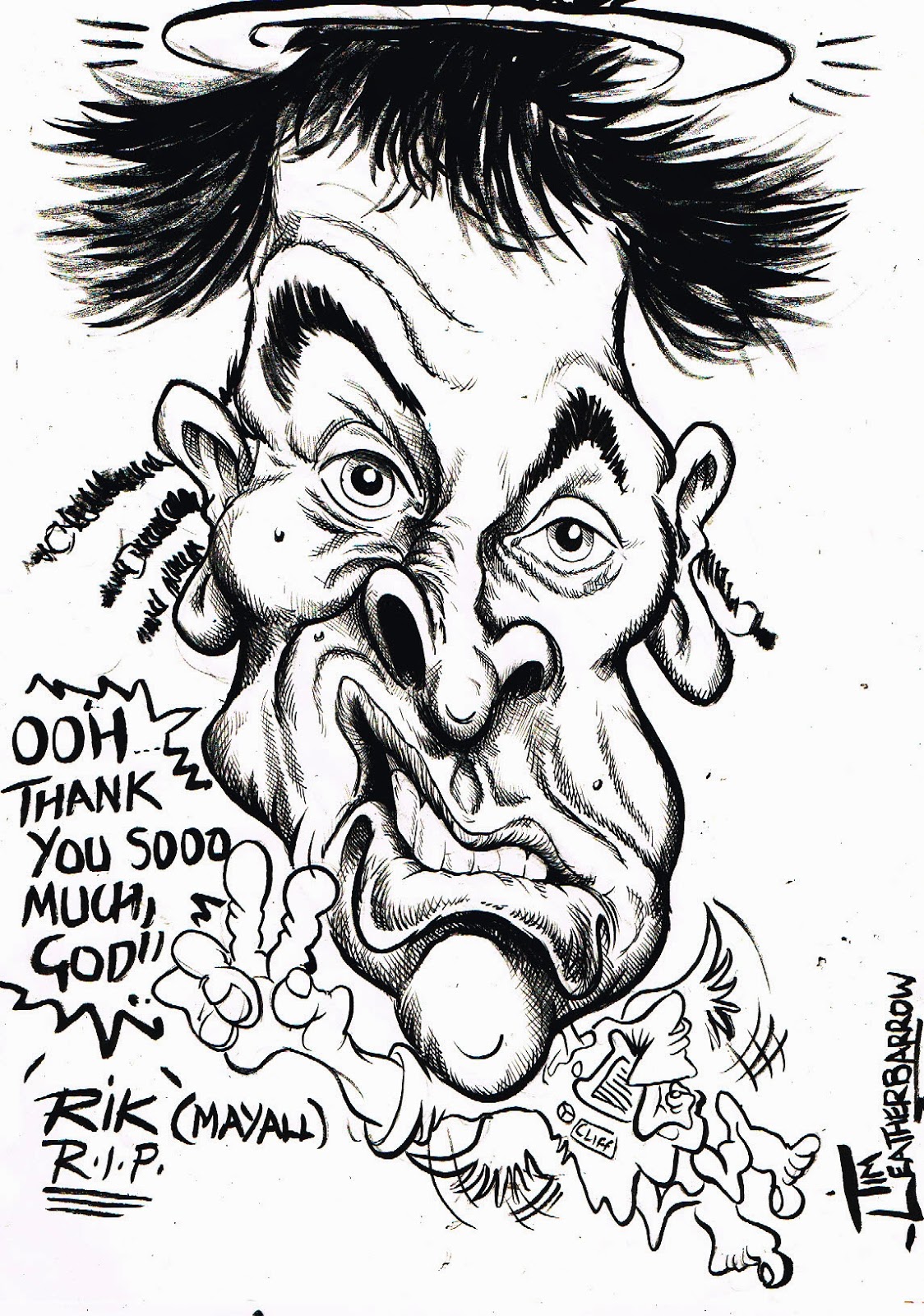 ONCE UPON A TIME.....In the 60's and 70's comedy was MORECOMBE AND WISE; DICK EMERY ;BENNY HILL and MIKE YARWOOD....All of which i am quite happy to admit to quite liking even as it is very un P>C. to admit it to a certain finger on the pulse age range who are currently under the age of 50. The night clubs were full of comedians in dinner suits ,telling 'mother in law jokes' and 'Irish' jokes ,oddly enough mostly irishmen(?)...And many whom i saw in pokey little pubs and clubs were great and funny. They didn't fill arenas and sit on panel shows being clever and smart arsed , they were out every night playing to some rough audiences and making their living for a relative pittance before the bingo!

In the 80's education (students) decided they were funnier than the old farts of the previous generation ,they could come up with clever 'on the edge ' stuff not relying on 'Stereotypical comedy....Ho-hum!'...The 'COMEDY CLUB' was formed and a new set of comedians evolved under the mantle of ALTERNATIVE HUMOUR....The old joke was ,that it was an alternative to humour ,and, in a lot of cases it was true. I remember being up in Edinburgh during the festival and my girlfriend at the time and some of her friends went to a comedy show .....God it was awful!

A few faces appeared on telly . One i liked was a character called KEVIN TURVEY and he would rant about what had got his 'gander up' ,a very odd character indeed! played by a certain RIK MAYALL. H disappeared for a while to explode back with his performing partner and co writer ADE EDMONDSON and a few others in an explosion of anarchic violence, slapstick and bad taste in something called 'THE YOUNG ONES.' Rik layed 'RIK' ,the 'peoples poet and mad CLIFF RICHARD fan; NEIL, the hippy and Ade Edmondson , Rik's fellow 'DANGEROUS BROTHER' from their insane violent stage act carrying on their violence as ADE played the psycopathic punk VYVIAN . Even today as they carry on showing the 'shows' , i defy anybody not to cringe at some of the 'hits that ADE,RIK and NEIL inflict and have inflicted on each other.

The show was a good springboard for many of their fellow 'ALTERNATIVES' at the time ;ALEXEI SAYLE, FRENCH and SAUNDERS; RUBY WAX and a heap of bands from the 80's who would perform from the bombsite that was their house.

All went their seperate ways ,but would all turn up occassionally on various shows through the years ,the main constant in it all was RIK and ADE. Their constant arguing and violence was a constant under the guise of different characters, a few were made ,but the most popular was 'BOTTOM'. RIK played a number of 'way over the top roles in series such as 'BLACK ADDER.' But got his own smash hit as the totally rotten MP ,ALAN B'STARD in 'THE NEW STATESMAN.' He had some acting work and appeared in various dramas and even films. And life seemed sweet.

An accident on a Quad -Bike put him in a coma for a good while and left him with EPILEPSY afterwards and having to heap piles of medication as sufferers do! The ADE and RIK partnership  split due to reasons around this ,but they both seemed to prosper and seemed almost respectable. ADE ,once VYVIAN is now a country traveller and presenter, DOC MARTENS replaced by WELLIES!

But that dark spectre of EPILEPSY which can strike anytime hit RIK MAYALL but he wasn't going to wake exhausted, sore with a chewed tongue this time ,the heart gave out and R.I.P. RIK MAYALL, Not the only good thing to come out of the ALTERNATIVE COMEDY stuff ,but the best with ADE ,who said how they laughed so much working together and now :"HE'S GONE AND DIED ,LEAVING ME BEHIND ,THE BASTARD!"....Or words to that effect!

Posted by Tim Leatherbarrow at 15:42 2 comments: Links to this post