THE LANGUAGE OF LOVE WAS WHEN THE CAVEMEN STARTED 'GRUNTING UP' THE WOMEN! 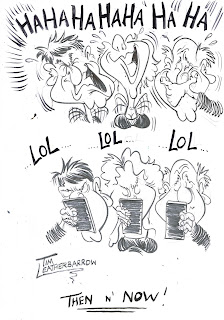 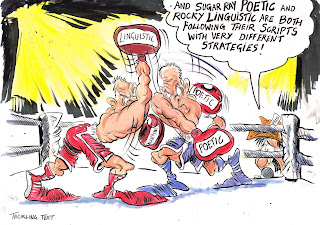 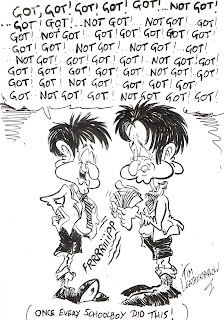 A way once upon a few million aeons ago when Homo's erectus had become his sapien !....(Have you ever had a sapien?)...Language was a series of snorts and grunts . It could be argued that the method of communication  has regressed to that level again. Language , with waving arms made a form of understanding possible. Various items and instructions adopted their own grunt and snort, for example "Grunt ,snort ,growl ,bark, snarl !!" could be translated as "Hey ,woman!...Pass me that bone i want to smash that lizards head in for dinner !" Repetition of the man of the caves house orders over time became understood by the cave wife and thus was planted the seeds of language. So it is a scientific , anthropological fact that man invented language, although it was up to the female to make sense of the grunting , no change there then!

At first every cave had its own language and when lone cave men got together in communities and had to communicate with each other , community languages evolved, although accents evolved from various caves. Fred Flintstone , Barney Rubble , and bill ughrock  would have the equivalent of scouse, Geordie and Brummie accents as they lived far apart ,100's of feet.

With the development of language romance evolved and women instead of being sex objects quite got to like being 'Grunted up!'...The prehistoric version of being 'chatted up!' As some smoothie cavemen were better than others at 'copping off!'...This started the the male to smarten themselves up, like cleaning themselves after ' dropping their guts!'....Even the women started prettifying themselves , scraping mud out of their hair and things ,this led to a massive growth in the population and like all good diseases the human race spread .

All over the place human settlements sprung up and not wandering about they developed their own languages . But they still werent very bright as they would be told things and promptly forget them. This led to the discovery of scraping symbols in the mud to remind them of whatever gossip or dirty joke they'd heard. Put 2 scribbles together and you have twice the information , almost a prehistoric graphic novel!

3 scribbles ,4 scribbles ,100's of scribbles and mankind was on his way inventing thinking and stuff like philosophy which was no good to anyone but involved lots of reading writing and thinking and led to science ,maths, history ,etc, (History was dead easy in them days ,as there wasnt much of it!)

As with language which was totally different wherever you went , the drawings that evolved from illustrations to a mish mash of squiggly lines or single squiggly lines from left to right ,from right to let ,from top to bottom ,from bottom to top ,from front to back ,from back to front....This variety of writing is probably more complex to understand than spoken language.

The spoken language spawned the theatre and stories and poetry written mixed it all up to into a stew we call 'the arts' with the creation of very odd well spoken characters called actors!...Who once spoke very well and were understood by one and all ,whereas nowadays we have film stars who speak the language of the 'Blockbuster action film' ,where the writing isnt important ,but action and heroes who speak with gutteral throat ripping grunts ,much like once long ago in the prehistoric times.

As the spoken language has regressed as 'street talk' has taken over and where once gentile local accents from areas all around our green n' pleasant land have been replaced by a horrible 'street speak' which has distorted accents like the Liverpool scouse accent which has gelled into a horrible scallification of a once decent accent. Evolution of the language ?

The written word was the tool of language and communication and a side effect was good spelling and punctuation.Then with the invention of the phone the spoken language returned in all its glory. Now in these days of 'Unsocial media' ,where texting has taken over the spoken language taking us
back to a preemptive written word, Where the writing is worse than god knows when, spelling ,punctuation has gone and that preemptive text curse , what is the f'in' point of that ?

I passed a school playground the other day and it was dead quiet ,with texting, i remember the playground full of bad language and various games had their own language ,again mainly obscene ,but always remember the swapping of picture cards, the "Got, not got !" language. Bad language or swearing is a wonderful new thing ,i have heard Gaelic and Welsh spoken and our very own 'F' word, "bollocks n' bastards " popping up , The English language was the one that invented swearing on top of everything else and for that we should be proud!
Posted by Tim Leatherbarrow at 14:56 1 comment: Links to this post