FANGS, BOLTS THROUGH NECK, PROJECTILE VOMITTING ,THE DEVIL, THE LIVING DEAD, BURSTING STOMACHS......WHATS SCAREY ABOUT THAT? 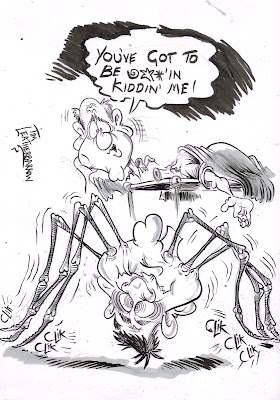 Everybody likes 'scarey movies'.......When i was a lad it was the days of the HAMMER horror in the late 50's and early 60's and introduced to the world CHRISTOPHER LEE and a certain bloke with big teeth and blood shot eyes going by the name of COUNT DRACULA. Later the other original horror creation FRANKENSTEIN,he was a 8 foot fellah with a flat head and a bolt through his neck and introduced PETER CUSHING as BARON VON FRANKENSTEIN and these two fellahs were in every horror film of the series that flogged the vampire and monster to death . But these films were ,on the whole meant to be taking place in  villages in central european mountainous reigions like TRANSYLVANIA, in massive gothic castles on a mountain overlooking villages full of gorgeous busty ladies with fantastic cleavages, i really fancied living over there, just avoid the blood suckers and flat headed monsters and you could be a happy fellah. The films always ended with the villagers getting slightly pissed
off with mysterious murders and vampires crawling around peoples bedrooms, in fact ,not only flat headed monsters and vampires wandering around making a nuisance of themselves ,there was the WEREWOLVES on the nights with full moons, but this combination of strange sorts always had the peasant waving flaming torches and burning down the castles. The original DRACULA was BELLA LUGOSI years ago in the 30's and the classic ,as i watched it fairly recently and suprised myself how much i enjoyed it ,but FRANKENSTEIN with BORIS KARLOFF. And one of the earliest and still creepiest is a silent film ,based on the DRACULA story called NOSFERATU, an amazing film.

Science fiction became popular and a classic scary films like PLAN 9 FROM OUTER SPACE , possibly the worst not just horror film ,but worst film ,ever made...But the classics were spawned.THE FLY; INVASION OF THE BODY SNATCHERS, WAR OF THE WORLDS and a whole heap of creepy and tension filled films. As special effects weren't much kop! they went for tension and creatures in the shadows and used the imagination . Blood and snot made a showing and films were banged out full of blood and murder in the 60's and 70's.

Science fiction and the HAMMER monsters became more bloody and then the DEVIL made an entrance and the dark arts and devil worship became popular ,like HAMMERS 'THE DEVIL RIDES OUT' and the ,nowadays considered cult classic with the excellent EDWARD WOODWARD gettin burnt to death in 'THE WICKER MAN....Possibly the most horrible frightening thing in that film is ,CHRISTOPHER LEE with a trendy almost hippy blond haircut and 'DANCIN!!!!!'

One absolute legendary 'scarey film' ,which still scares the bejabbers off me is THE EXCORCIST, banned for years and even today some real shocking scenes haven't lost their power. I think the phrase 'Projectile vomitting was invented in the Excorcist, if you dont believe in god ,i think if you watch the EXCORCIST ,you probably will end up believing in the devil!

The power of the imagination can be shown by the fact that in the 70's a series of films were made ,but had to take it easy on the special effects due to money problems. For example 'JAWS'....Originally the shark was meant to be a lot more in the mix, but they had so much trouble with technical problems with the shark ,that its appearences were drastically reduced and as a result the tension was cranked right up and it quite simply became one of the cinematic greats that never fails to scare the 'SPEEDO'S' off you!

ALIEN ,an absolute classic ,the alien was reduced due to finances so the tension and suspense was cranked up and for that reason ,nobody sits comfortably watching that film. Apparently the most famous scene ,you know where i'm going dont'chya?....JOHN HURT and his slight indigestion problems. Apparently when they set the effect up ,the rest of the cast didn't know what was going to happen and the looks of horror, are really genuine...A classic film ,greater than the sum of its parts.

THE THING!.....Another classically scary tension filled film of some kind of polymorph and lots of slime and blood ,as a group of men trapped in a polar base and icey cold suspicion sets in ,with wonderful pre-CGI effects ,horrible and humorous, remember the head running of on spindley spider legs?

Another simple tale, but absolutly terrifying is the magnificent REUTGER HAURE in the excellent 'THE HITCHER', A lad picks up a psychotic murderer on a stormy night and is then on the run for his life , theres the famous scene of a girl tied between two trucks, you dont forget stuff like that , like the water going down the shower plughole in PSYCHO.

Nowadays we're flooded with CGI and the planet and cinemas and telly are swamped with ZOMBIES, totally relying on decaying bodies , no more great stories ,such as HITCHCOCKS ,'THE BIRDS' a story ,of a strange phenomenah ,birds going crazy ,theres no explanation ,just a terrifying film of the world 'going wrong', Birds going nuts . The effect is accentuated by the fact birds actually attacked TIPPI HEDRIN as HITCHCOCK wanted realim and scared the poor woman to death

Posted by Tim Leatherbarrow at 15:17 No comments: Links to this post