I MET PETE TOWNSHEND AND HE'S GOT A WORSE SIGNATURE THAN ME !!!!! 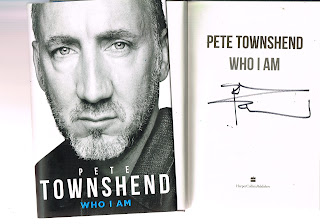 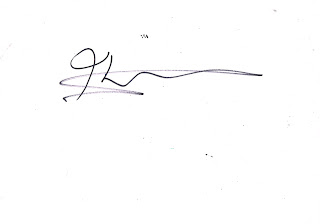 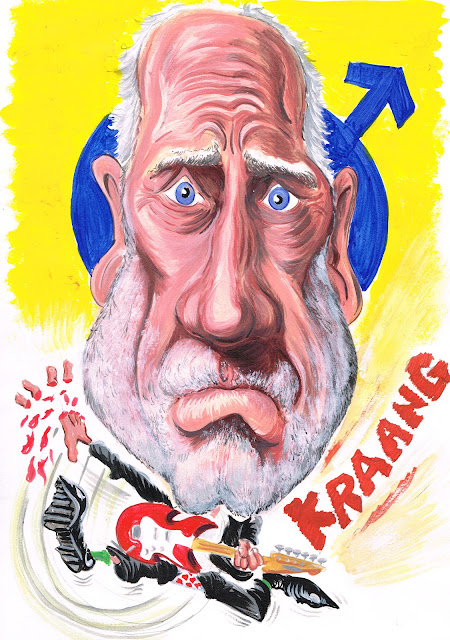 The other day me n' me ol' mate Simon met up in our beloved capital city. Before involving ourselves in the business of the day we ,of course ensconsed ourselves in a boozer to partake of a 'couple'.....We were down in our capital den of iniquity to meet with a certain 'rock n' roll legend ...a certain MR PETE TOWNSHEND  , crazed guitarist of the parish and the 'ORRIBLE 'OO!'....He was doing a talk and signing copies of his newly released  autobiography. We found our hotel in RUSSELL SQ  and entered our cosy lodgings .The reception was 'manned 'by two fat miserable scowling exotic far eastern ladies totally ignoring us as they yattered on in Indian or Bangladeshi  before snarling over her shoulder "SEVENTY POUNDS ,OUT BY TEN AND ..NO BREAKFAST!" throwing a key at Simon and a three story trudge up a narrow staircase to our luxurious twin cupboard.

We trolled across town to find BRICK LANEin the EAST END .We found a bar next to the OLD BREWERY ,where the event was taking place. and had a drink with a group of fellahs who'd followed THE WHO since the very early days....One was the original drummer DOUG SANDON ...An one of TOWNSHENDS oldest friends and one time flat mate and author of the excellent WHO biography MAXIMUM R&B..RICHARD BARNES....Barney to his friends! They were all good lads and we had a pleasant chat and a few scoops were consumed until the 'effin' boozer ran out of beer?????....

We went into listen to the main attraction and after an entertaining hour and a half ,as MR T' was in good form and seemed to be enjoying himself he got to signing the books. We queued up like good fans, i had my caricature to present to him ,i thought i might get a picture with me TOWNSHEND and the caricature....But being a typical corporate 'event', the place was run and organised by 'Bright young things' guaranteed to screw up any organised event. The security had luminous coats inside for some reason and could've  only been in their teens. When i gave PETE the picture they pounced on me yelling "NO MERCHANDISE!" TOWNSHEND took it off me and chuckled and laid it on the floor beside him ,i passed the padded envelope and they flew into a noisy panic again ,TOWNSHEND looked at them and said "IT'S OK ,ITS ONLY AN ENVELOPE!"....He signed my book and laughing he thanked me  as we shook hands, i said "Cheers ,Pete!" and our dedicated pain in the arse organisers wouldnt allow any pictures ,so that was that!...We retired back to the boozer and they had even less ale than before. A WHO family member called WOLFY offered to get the picture signed and returned to me, but i thought "Nah!it was meant as a gift and it would've been great to get a picture and i was hoping to get it dedicated to THE LOVELY LYNNE, but we're the fans who spend all our money ,queue and sleep in hovels in Russell Square ,etc ,the corporate shitheads in the reserved seats get the perks ,etc. But i met PETE TOWNSHEND, so i'm happy.

His signature is nearly as totally indicipherable as my own. I was going to put it up on the blog, but the dang blasted computers playing silly buggers again ,so you'll have to make do with the TOWNSHEND caricature AGAIN!!!!

Posted by Tim Leatherbarrow at 15:23 8 comments: Links to this post 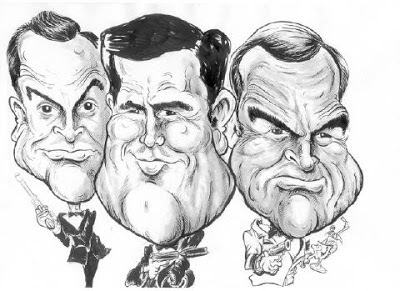 It's shameful being a 52 year old husband n' father sitting trying to stifle the building schoolboy -like excitment that s building within my my (only slightly ptotruding)middle aged belly.....And what is this excitment that has gripped me ,well quite simply ...JAMES BOND IS BACK The new film SKYFALL is out in almost days...THE LOVELY LYNNE is slobbering at the prospect of that DANIEL CRAIG flaunting his manlyness around the screen ,whereas i'm looking foreward to the more cerebral aspects to the film, story ,characters and most important of all the extreme violence that Craig has put into the fights . There is an aspect of this that i'm worried about .CASINO ROYALE wasn't 'that' bad for it ...QUANTUM OF SOLACE was terrible for it and i'm praying that SKYFALL will not suffer from it...The 'IT' in question is the high speed ,hand held ,badly edited blur that all action sequences in films over the last number of years are full of. QUANTUM was a blur. To this day i still can't make hide nor hair of the opening car chase. The rooftop chase could've been a cinematic masterpeice, but was to fast and cluttered to follow, etc, etc.
Just recently SKY have been reshowing the BOND  films and i've been catching up. SEAN CONNERY  has filled my last week and he's still good ,i didn't take to him for a long time ,not because of his BOND ,but i just didn't like him for some reason...A great BOND  ,but for a long time i just didn't like him!....He had some great 'PROPERLY FILMED' action sequences and fights ,remember ROBERT SHAW in FROM RUSSIA WITH LOVE on the train and  virtually every film he made ,i quite like where he beats the shit out of two blokes in a lift in DIAMONDS ARE FOREVER. They were the classic BONDS without a doubt .
I watched GEORGE LAZENBY in ON HER MAJESTY'S SECRET SERVICE yesterday and it's a great film and i didn't mind poor George . He was great in the violent bits ,some really good fights and ,EMMA PEEL , as was DIANA RIGG ,who described him as "A shit!" on a recent interview and was supposed to have scoffed garlic for the love scenes. LAZENBYS agent advised him not to take the offer of more Bond films, ah where'd we be without people to advise us. 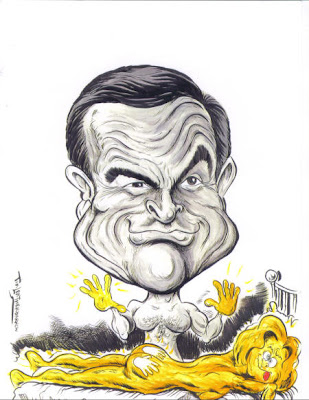 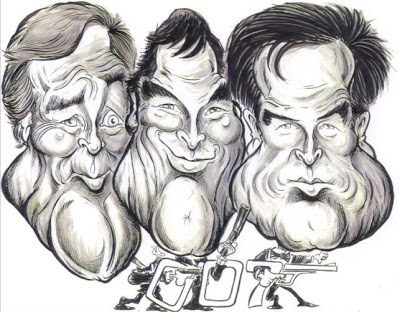 I'd grown up loving ROGER MOORE in THE SAINT....And was chuffed when he became Bond in LIVE AND LET DIE. I have to admit liking his films ,every one says he played it 'tongue in cheek', but when he had to be the mean Bond he did the action and fights and could be mean. I always thought ,like DOCTOR WHO it's not whose best, but because they changed  is what gave them their extended life. MOORE played a few stinkers ,my personal 'stinker' is THE MAN WITH THE GOLDEN GUN. From LULU's theme its downhill all the way.
TIMOTHY DALTON could've been a good 'un....He was going back to IAN FLEMINGS Bond and THE LIVING DAYLIGHTS isn't bad , the fight on the netting from the back of a HERCULES TRANSPORT PLANE is great....These are the days when stuntmen did it all ,i mean actually did it all! Dalton was tough and mean ,i liked him and problems with film companies meant films didn't get made and Bond was on hold and ol' TIM never got the chance to don the dicky bow again.
PIERCE BROSNAN hit with GOLDENEYE, still the skinny little charmer from that gawd awful REMINGTON STEELE...That wasn't a bad film ,good touch putting 008, SEAN BEAN in as his mate then as the baddy. The poster for the next ,'TOMORROW NEVER DIES', shows Brosnan a lot more muscled than before. He wasn't bad and watching them again ,as they were made so well, they're always better than i remembered. The Peirce days finished with an INVISIBLE CAR?....Then they said "We're taking Bond back to basics!" 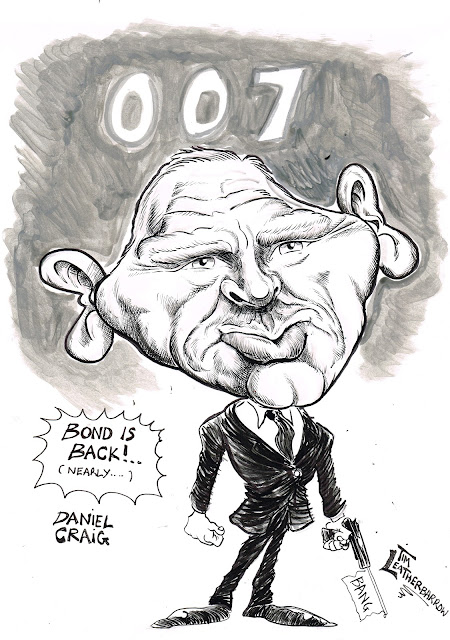 Then the shit hit the fan and "OH MY GOD! A BLONDE BOND!".....Riots took place in the streets ,websites slagging off poor old DANIEL CRAIG abounded . He arrived at the press conference with the ROYAL MARINES ,but as the Marines did ,he wore a life jacket over his dinner suit..."JAMES BOND WEARING A LIFE JACKET..OH GAWD!...IT GETS WORSE!"...Poor Daniel couldn't win .They forgot even SEAN CONNERY wore crash helmets with his jet pack and LITTLE NELLIE gyrocopter. But the new boy ,blew them away . Daniel Craig is now a national institution beloved by everyone ,esspecially my missus! From the little i've heard SKYFALL is getting good vibes , SIR ROGER MOORE  reckons its the best Bond, ever and Craig is far the best Bond .....God i need a drink...A mug of tea stirred not shaken!
Posted by Tim Leatherbarrow at 15:55 4 comments: Links to this post

THE BOY IS BACK WITH TUBES OF PAINT POTS OF INK AND A HEAD FULL O' SHIT! 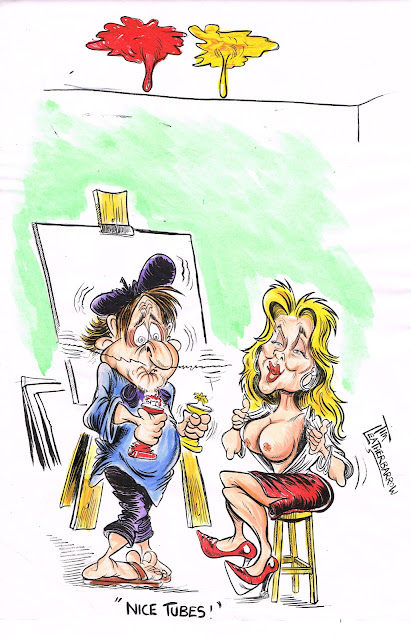 Due to problems with the computer ,compounded by the apparent existance of an electromagnetic BLACKHOLE which exists in the middle of our house causing our BROADBAND signals to be sucked up in to the spiralling EVENT HORIZON before being sucked with every thing else to do with phones ,light ,computers and telly's and stuff  in to the yawning chasm of the GRAVITATIONAL SINGULARITY that exists in the middle of our living room ,according to the nice B.T. telephone broadband engineer they sent out to us the other week. All the problems and achingly slow hair tearing ,teeth grindingly signals are due to this 'Black hole!'... All you out there worrying about when i shall inform and entertain you in the ways means and why's of the world and bafflements and befuddlements of 'life the multiverse and most things, you may rest easy Blackholes allowing i'm back.....Even now the keyboards playing up as the computer signal keeps freezing. The only that can stop TIM LEATHERBARROW outing his inane/insane garbage is the most powerful force in the universe, not bad eh?﻿
Posted by Tim Leatherbarrow at 15:45 5 comments: Links to this post

CANT GET IMAGES N' STUFF ON MY BLOG SO HANG ON AND YOUR LEADER SHALL RETURN TO EDUCATE AND GUIDE YOU THROUGH THE TRAUMA ND CONFUSION OF LIFE!

Posted by Tim Leatherbarrow at 11:35 No comments: Links to this post