DRINK UNTIL YOU PEE BLOOD AND EAT UNTIL YOU REACH 42 STONE, THATS A HAPPY CHRISTMAS! 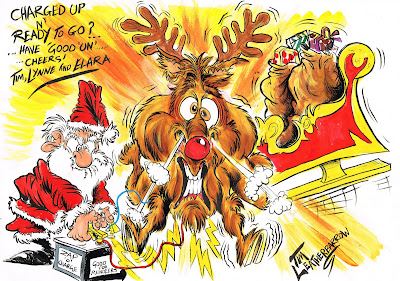 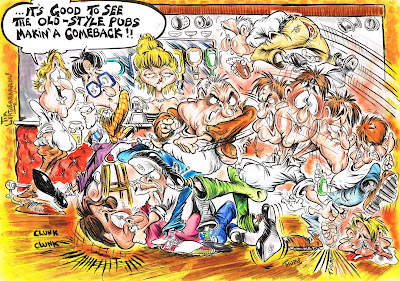 As i sit here with my 47th mug of tea using up my 94th tea bag of the day and a good chunk of a sugar mountain....Every channel through the digital interference (those annoying little squares that freeze the picture when the weather does its stuff, like today ,as the snow is casscading down)....But all the channels keep announcing on the news that today is the 'BOOZIEST DAY OF THE YEAR!'......So as me n' the dog sit here watching the news slurping gallons of tea, everybody else is out BINGE DRINKING, apparently ....The jammy Bastards!!!!...... I can imagine all the old boozers in Liverpool will be filled to the brim with guzzling festive frollickers. I might managhe a glass of wine tonight when i'm catching up on my SKY+ ,somewhere between 'LAST OF THE SUMMER WINE', 'STEPTOE', and 'THE HIGH CHAPPERALL.' You have your booziest and i'll have possibly the boringest night of the year!.......Now they're calling it VOMIT FRIDAY......I hope i can keep my mug of tea and banana buttie down!
Posted by Tim Leatherbarrow at 12:56 2 comments: Links to this post 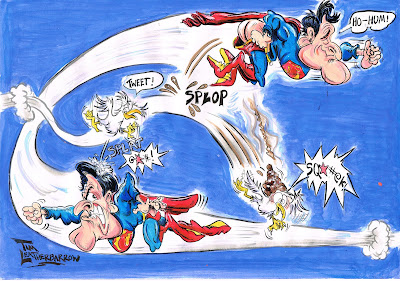 'Up There!'.....Theres nothing there as its only thin gas we know as air and if you toss a stone or something up it flips and plummets straight back down again twice as fast as it went up. Theres no way anything should be able to stay up there. Then your argument hits its first hiccup when the first birdie flutters by and shits on your car windscreen. Birds are amazing creatures with the gift of flight.....Well their exterior ,the feathered bit is gifted their insides arent as gifted,but as long as the insides stay inside all is well. When the remains of their last meal decide to make an appearence as happens with all of gods creatures, gravity snatches the disgusting mess from beneath the tail feathers plummetting down to splatter across the pristine windscreen or shampoo'ed hair of some poor pedestrian. This ,in our little land is a mere inconvenience, but when we lived in India and Malaysia and EAGLES,FALCONS,HAWKS,etc constantly circled high overhead . Their 'do's' were like being shit on by a shire horse from 800 feet. Natures very pretty and all that, but dont look up too often.

If you look up where we live you see a sky criss crossed with aircraft vapour trails, when you see a jet flying through a clear cloudless blue sky i cant help thinking"What in gods name is keeping it up?" The moisture and fuel droplets filter down over us as do the billowing clouds from local power stations and the flagrant emissions that bubble and billow forth from RUNCORN and WIDNES and various spots around the fragrant NORTH WEST. It all eventually falls from the skies ,as did the radiation from CHERNOBYLL all thoseyears ago ,i remember the weather forecasts reporting the progress of the radiation cloud. And i was in LIVERPOOL as it drifted over during a rainstorm, little irradiated raindrops dripping over our heads.

All the SPACE JUNK building up ,sattelites and space stations,etc some losing their orbital velocity and turning into a fireball as they hopefully burn up in the atmoshere, but not all the time. Hands up all you old farts who remember SKYLAB falling out of orbit ,not NASA's proudest moment ,landed in Australia, i think. But while all these goodies from bird muck to space stations are constantly pouring and tumbling out of the sky, theres even more mysterious and deadly forces at work. Dust and rocks, meteors and meteorites are burning through the skies. If your not too worried about the effect of a fair sized lump of rock fresh from the KEIPER BELT or the OORT CLOUD at the limits of the SOLAR SYSTEM, just ask any DINOSAUR what he thinks about meteorites. I was looking at a picture of a place called TSUNGUSKA(i think!), but a meteor exploded above the ground and flattened forests for 500 miles around all the trees flush with the deck radiating away from the blast zone.

At the risk of spreading fear and paranoia, the sky looks clear ,fresh and emty ,totally harmless ,but its not, actually as i've been typing this garbage a bird flew into the window of my studio ,put the fear of god up me ,stupid little feathered get!
Posted by Tim Leatherbarrow at 14:36 2 comments: Links to this post

LETS DRINK TO IRANIAN DIPLOMACY, POSSIBLY THE BEST DIPLOMACY IN THE WORLD! 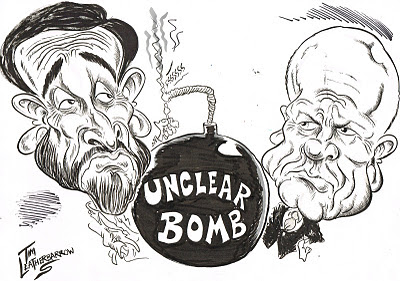 The world is a wonderful place and we all love it ,and possibly we'd all love it n' each other ,not caring who lives how and where as long as we can live and eat, we dont need tellys, computers cars ,etc the paraphanalia that is the horrendous complex shithole of a planet we live in. My family used to live on a farm in the middle of Ireland and we tried that stuff they used to call,'fresh air'. We'd walk on stuff called grass and soil and when people complain about dog muck we had 3 foot wide cow pats to stand in. Actually i quite liked the smell of cow shit. couldnt stand horse shit though! Nowadays theres not a kid who'll leave the house to try fresh air or even to walk on grass and through trees etc. Whereas we lived and loved a natural life ,thats all gone now. We live on estates watching reality telly ,computer games ,etc claiming our benefits as nobody has a job in this land and world run by those in power.

The aforementioned arseholes who run our world are the ones who create and maintain borders create international conflict, create the weapons to fight the conflicts they drag us into. As i write this rubbish, over in IRAN, one of the most popular countries in the world. Theres millions of perfectly normal poor people who just want to get on with their life. They are ruled by a friendly looking big eared smiling little bloke who wants to build nuclear weapons to blow his neighbours and us swine and infidels in the west to smithereens. Oh oh oh wot a lovely world...Just spoiled by those who run n' ruin it!
Posted by Tim Leatherbarrow at 14:13 2 comments: Links to this post

TOP GEARS JEREMY CLARKSON SHOOTS HIMSELF IN HIS FOOT IN FRONT OF TRADE UNION MEMBERS FAMILIES.... 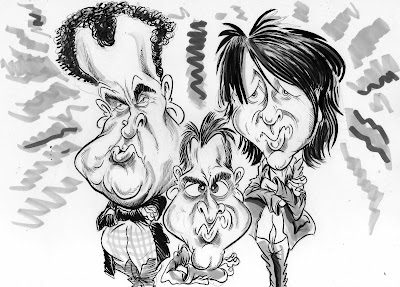 JEREMY CLARKSONor 'JEZZA!' as he's oft known as has stuck his size 42 foot in his gob again after saying how public sector strikers should be taken out and shot in front of their families. Today i was amazed to find on the radio a intellectual studenty sounding girl who apparently represent the unions saying how disgusting it all was. It was sick, appalling and deeply offensive to the families of those involved. They played cobbled together bits that when later when they played the whole interview had a totally different context to the one initially pushed. Clarkson when collared at an airport said "just listen to the full interview!".....I actually like' ol Jezza!'. He's a cross between ALF GARNETT and JOHN CLEESE. He is a journalist, but a humourous writer and journalist and nobody should be suprised at what he says by now as he's almost a national institution. They invite him one to a daily magazine show ,get him started and feign shock and suprise when it blows up in their face ,just as planned and the complaints from the moral majority come pouring in. If the immoral minority ,which is the rest of us ,who thought it was funny,and who couldnt be arsed anyhow and definitly have more things to do with our lives, sad though they may be, than write to complain to the BEEBEEBCEE! Because if we did their computers ,etc wouldnt crash they'd vapourise with the flood of correspondance.....Another sign of how when we need it most the Great British sense of humour is being crushed. They never interview people who like or enjoy things, just people who have to think things to death spoiling it for themselves and the rest of us who've got to listen to that shit!...They're the ones who should be shot!
Posted by Tim Leatherbarrow at 16:13 4 comments: Links to this post