THE DISCOVERY OF GRAVITATIONAL WAVES HAS CHANGED SCIENCE AND COST BILLIONS ...I DISCOVERED THEM YEARS AGO..THEY'VE STOPPED ME GETTING OUT OF BED IN THE MORNING FOR YEARS! 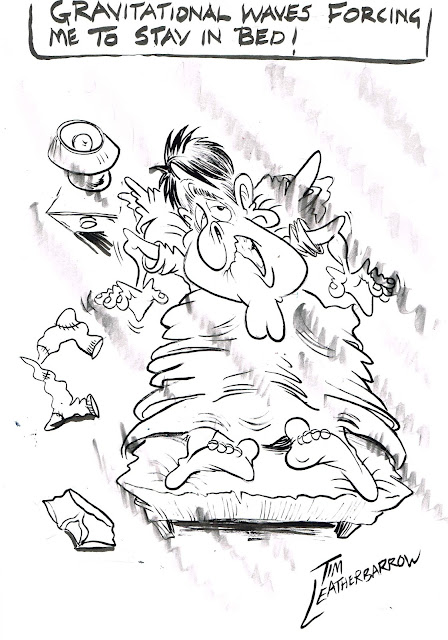 A little scruffy shaggy haied fellah in slippers ,puffing on a pipe gazing into the distance on a comfy couch sometime around the beginning of the century by the power of thought alone discovered and solved all the problems of life the universe n' everything. A certain Mr ALBERT EINSTEIN and his infamous thought experiments. What would it be like to ride on a beam of light ,etc caused him to come out with ideas and theories that have had scientists trying to disprove all this time and with all the increasing technology and thousands , millions and now billions of various currencies and construction of amazing laboratories, machines and space probes basically still havent beaten 'ol Albert!'

One of his theories the GENERAL THEORY OF RELATIVITY isn't anything to do with how time drags and passes much slower when the family come to visit.....Which i'm sure can be scientiffically proven. It'd be interesting to see the equivalent E=MC2 formula for that one. But the theory created a thing called space time and how the mass of an object distorts space and time to form that ground sucking droopy body causing thing we call gravity.

Part of the theory that they've searched for with ridiculously exspensive massive and fantastically sensitive , mainly laser beam -themed devices is to detect a thing called GRAVITATIONAL WAVES caused by massive objects spinning around each other at increasing speeds , like BLACK HOLES and NEUTRON STARS and all kinds of interstellar goodies like that. These cause waves and ripples of distorted space time to drift across space. But through the years these incredibly sensitive lasers have picked up traffic in other countries and mouse farts from a 1000 miles away , but not our longed for theoretical Gravitational waves.

I discovered them years ago. They've been slamming into me after billions of light years journeys like a blacksmiths mallet flattening and tempering a plate of iron. This has left me tempered(bad!)...And flat out on my bed in the mornings unable to rise with the lark, but STEVE WRIGHT in the afternoon ,more like! It's not my fault , Einstein explained it and proved it ....I'm a victim of the forces of the universe.
Posted by Tim Leatherbarrow at 14:56 3 comments: Links to this post

THE GOLDEN AGE OF GREASE GRISTLE N FAT WHEN CHOLESTEROL WAS AT IT'S HEIGHTS! 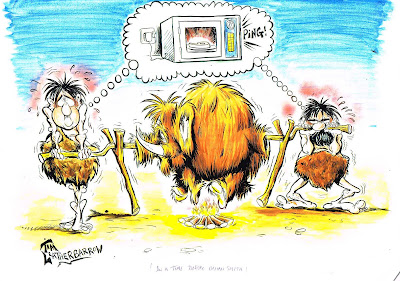