Now after a little admittedly cynical start to the OLYMPIC GAMES i am quite happily able to admit to being impressed and proud by my country and my fellow populous.....The joy and spirit that the British and Irish are known for is still there . And after a fortnight of being the centre of the universe we've showed the world how it should be done. The sportsman and women (,christ ,the girls were cooking on gas,weren't they?)....They were all amazing as were the crowds and all involved . The opening show and the closing show were both "WOW!" events .And i was a little worried ,when about midnight last night i thought that the WHO weren't going to appear at the closing ceremony, but "PHEEEUUUWWW!"....Pete n' Rog were there to help the place explode at the end. I have to say ,that aside from that French fellah ,the head of the OLYMPICS,or whatever he was ,still not convinced he was  important enough for every single bloody announcement over the whole games to be said in French first. The only other politician i saw or heard from was SEB COE and i have to admit to being impressed by what he said,god on yer ,Seb. At least i didn't hear from our beloved pain in the arse PRIME MINISTER and his lot ,as well as the other lot....Almost a politician free fortnight .Hardly any celebrities and not a single 'stand up 'comedian ...On our telly ,anyhow! We enjoyed the atmosphere and the sport ,some very strange ones i must admit, but i didn't get bored at all. The British athletes ,MO FARRAH ,etc ,just astounding stuff ,everybody in the house yelling over their chinese takeaway over the 2 Saturdays.

Will the spirit of sport infest us?...Will the gymns and leisure centres be full to the Sally Gunnells with people enrolling in all these new sports ,as well as the old ones determined to make RIO in 4 years ,or just to play a game and get rid of the gut?....I tried running a few months ago ,but not being much of a runner off the footy pitch , my attempts can be summed up in my graphic portrayal below. THE LOVELY LYNNE having recovered from her seriously bad illnesses this year is running with the dog and is feeling "GREAT N' SOOPER!"...And is feeling and looking great. The incentive to forge my body in the furnace of my will hasn't really taken hold yet with me. 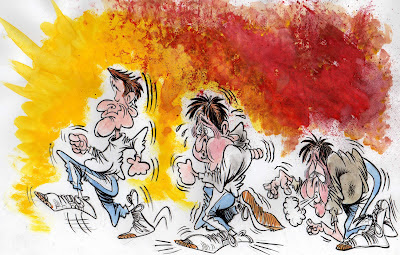 Now the games have stopped the politicians are starting to move into their latest 'BUZZ THING!'....promoting school sports ,the same sports their cutbacks ,etc stopped and closed the facilities for all over the country....But it's good for votes. Funny a few years ago ,they were trying to reduce or stop sporting competition. Winning or losing wasn't important ,the taking part was what mattered, hmmmm?

The combat sports are holding their own ,the boxers ,the girls!.....Fighting a stormer all of them. The lads fought some hard opposition and all did well . The TAI KWAN DO had a bit of controversy ,the federation wouldnt pick the British World and European champion as he trains with his own coaches and not with teamGB. So the lad who took over got a lot of unfair flack ,even though he won a Bronze. It does seem the top fighter who'd rained for these game specially did get the shitty end of the stick.  But the Judo and boxers as well were unstoppable, as were the Irish boxers. 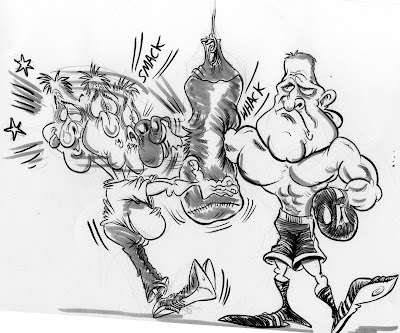 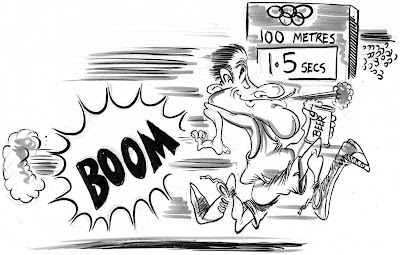 We had a good showing in the various athletic events and a few Triathletes n' Pentathletes ,etc, i kept thinking of the achetype british comic character WILSON the fittest man alive!'....And , of course ALF TUPPER,THE TOUGH OF THE TRACK!'....He'd get the bus or run to take part in a marathon and stock up on fish n' chips before the marathon or 400 metres ,or 10000 metres ,or all of them.....Our Brit lads with a can of lager n' a fag overtaking USSAIN BOLT.

But overall ,as MICHAEL JOHNSON the American legend said.."He was happy that ,at last British Athletics had 'made it!"...Runners ,throwers ,jumpers .Had held there own and done us and themselves proud ,no longer also rans. 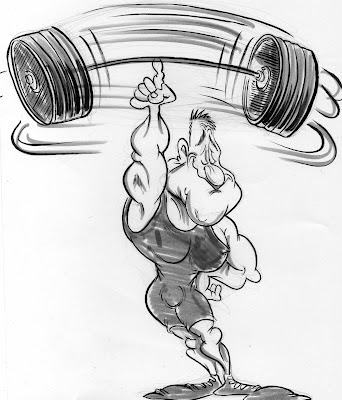 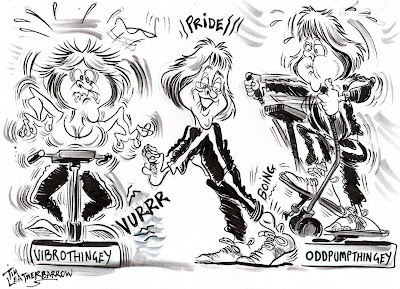 As Lynne is getting herself into a modicom of shape ,quite pleased that she has calf muscles. She did have a set of various gymn machines ,but my cousins thought it was highly amusing ,as they said that the only use she'll get out of them will be to drape washing over them....And sure enough the dripping undies and shirts n' blouses dripped dry from hi-tech fitness equipment in the utility room.

But now its all over ,the telly's back to normal ,last night JONATHAN ROSS was advertised as was THE X-FACTOR....Debates about the effect of the olympics and the way foreward ,etc etc is on every channel and all the endlessly repeated stand up comedians ,'Live at the Apollo ,etc are suddenly there again. Its back to normal again .
﻿
Posted by Tim Leatherbarrow at 15:36 38 comments: Links to this post

I DONT KNOW WHEN THE LAST MARTIAN OLYMPICS WAS ,BUT THEY STOPPED THE WATER EVENTS LONG BEFORE THE TRACK EVENTS. 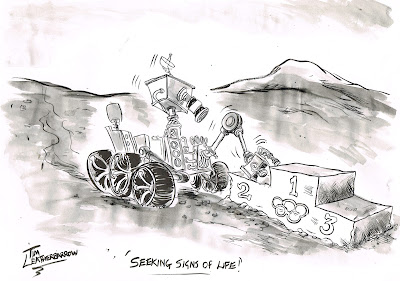 It has to be said that life and energy has been brought to our little island with these OLYMPIC GAMES thingeys taking place. It is wonderful to turn on the telly and hear stories of  normal dedicated people busting a gut for no other reason than to win a medal for their country....Real sportsmen and women ,not overpaid proffessionals ,except for the footy players and tennis players which are thrown into the mix for some reason. And it seems theres hardly a word spouted  from the politicians, in case they upset the voters who're having a ball. As Britain rakes in the medals they've started hinting about the promotion of sport for the youth of the future ....These are the same sporting facilities that their cutbacks have taken away from the the youth of the last few years and the future. All the athletes that have done us so proud have had to jump a bus or get a lift under their own steam at some ungodly hourin the morning or night to go and bust a gut at a gymn or pool somewhere before or after ,or both school or work. The corporate stranglehold and security and ticket screw ups were all down to the sponsors ,politicians and organisers and we know who they were, they caused the empty seats not the the Great British public.,The joy and euphoria and pure British insanity that has blossomed forth is wonderful, as a result   the rest of the world not only thinks we're mad  they're now convinced of it and i'm so proud of us!

On the subject of worlds ,across the void of space "Nobody would have believed.....!".....I can hear RICHARD BURTON reading WAR OF THE WORLDS.While all the chaos was taking place here the yanks dropped the Martian rover CURIOSITY on the surface of MARS. It's job ,to have a trundle around ,filming ,scraping and digging to find traces of life. Maybe there was life once upon a time. Who knows Billions of years ago the OLYMPICS could have taken place there. Swimmers with 5 arms, Gymnasts with 4 arms and pretensile tails ,great on the parallel bars or the pommel horse, etc. But once the water had dissappeared after the magnetic field dissappeared the water sports woul've gone and the field events as well. But the craters would've made good VELODROMES and cycling would done well. The dry ground would've been ok for the track events so the OLYMPICS would have faded over time.The wet events then the murderous marathons ,as Mars has mountains about 10 miles high, murder on the hoof or bike have you seen the state of the roads ,rocks n' potholes on the Martian surface. There'd've been no countries once the seas had dried up so no international competition, so no sport ,the martians must've died of boredom.
Posted by Tim Leatherbarrow at 16:46 No comments: Links to this post 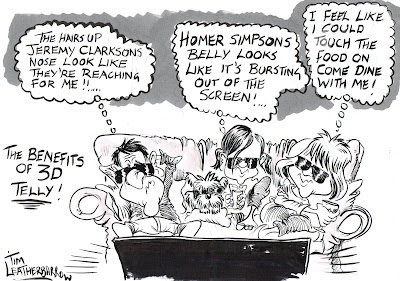 A few weeks ago me n' the LEATHERBARROW rabble went to the pictures for the first time in a long time. It was to see THE AVENGERS ASSEMBLE......IN 3D...... we paid our exorbitant fees for the tickets then for the sweeties and popcorn to crunch and annoy the people sitting around us as much as their crunching and paper rustling was  annoy us.   best defence against irritation is to annoy them first .....Attack always the best form of defence. We then  had to splash out on a pair of crappy plastic sunglasses as the epic we were about to watch was in 3D.

We sat in our comfy seats down at the front ,if your going to watch the big screen you may as well watch it as big as you can.  back seats were ok for a snog with a bit o' stuff in younger days ,but when with the missus and daughter you may as well focus all your attention on the  screen and god forbid.. ....The film, things haven't half changed. I slipped my cheap scratched scuffed sunglasses on. Although the screen was about 30 feet in front of me i could hardly see it even if it was in 3D and bursting out at me across that 30 feet. When the MARVEL COMICS epic started the best bits of 3D imagery were the various 40-odd production company corporate image logo's. When the film started there was wonderful scenes of people stood in front of each other or cops in front of fire hydrants. These are the moments you go 'Oh a bit of 3D he looks like hes in front of the screen. For the next few minutes things look quite normal, i slipped my glasses off as i find them annoying and was amazed at how bright and colourful the film is without them until the suprisingly clear picture goes slightly blurry again as ,apparently a little 3D 'trick' is occurring on the screen ,so ,slipping my specs back on to see a taxi cab driving out of the screen the dusky gloom of the dark cinema exagerated by wearing sun glasses in such a room.

As the action rips off and IRON MAN and THE MIGHTY THOR, Lest we forget THE INCREDIBLE HULK as these are the guys who do a bit more flying in and out of the screen. CAPTAIN AMERICA doesn't do as much ,but his sheild flies around a lot . The CGI SPECIAL EFFECTS which are a bloody curse as everything is done so fast and frenetic and is compounded  by 3D.

Real life is 3D. Up ,down; side to side;Foreward and back.....2D as on film, etc seems to be 3D as the action is all over the place and is easy to follow . 3D is nearly 1D ,basically in and out of the screen. The last few times i've been to the 'Flicks' its been good ol'2D and i have to say i've preferred it  each time the pictures better the action easier to follow.

The prospect of the family sitting on the couch with our 3D sunglasses in front of our 3D telly ....Well, can you imagine 'EMBARESSING BODIES !!!!!!.... and allthe other telly goodies we're inflicted with night after night coming out of the screen at us ....Hmmmmmm?.....2D ,a t least keeps them within the screen where they're better off!
﻿
Posted by Tim Leatherbarrow at 14:44 No comments: Links to this post