RUGBY A GAME FOR GENTLEMEN PLAYED BY BLOODY BIG PSYCHOTIC NOT VERY GENTLE-MEN!.. 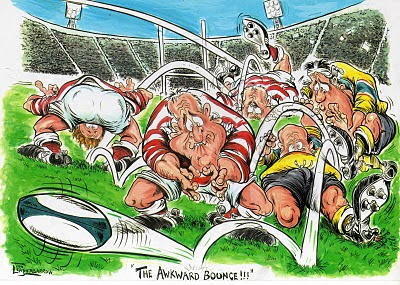 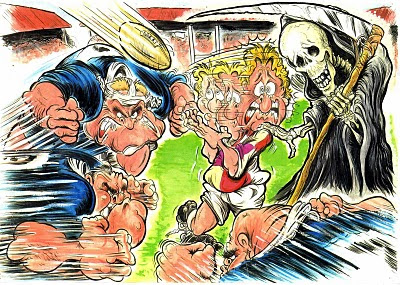 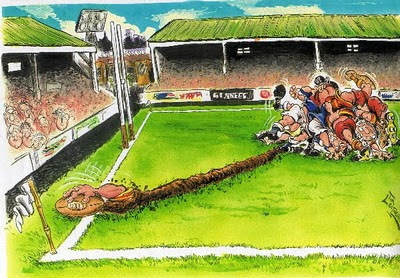 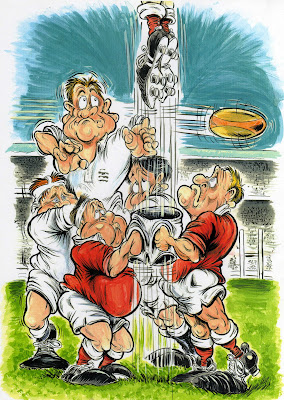 Rugby a hooligans game played by gentlemen ,apparently....Bloody big ,psychotically deranged gentlemen maybe ,but there y'go. I was watching the 6 nations games ,over the weekend and noticed how the players nowadays are a lot more muscely and hard n meaner looking than in days of yore. It also adds to the meaness when you've got these French eight foot fifteen fellahs with hair down around their shoulders and everyone calling them 'horse' , or some animal name.
It also strikes me as odd ,when i used to watch and ,yes ,once upon a time play rugby ,the players would all be covered in mud and green grass stains. But not now ,yellows ,blues ,purples a variety of pastel shades from the pitch adverts.
I remember working at a caricature'gig' up in Scotland a number of years ago and while i was scribbling away the Englih squad arrived to play Sotland the following day. Jeez! they were big bastards, not just big ,but ,big!...I was passing by a hallway in the hotel and the players lined the hall waiting to get into their rooms. A little maid had to 'run the gauntlet', of walking down the length of the hall with these leering monsters either side. She looked absolutly terrified.
As i've been a little lazy of recent i've put on a few rugby cartoons wot i done over the life of this here blog. Hope ya like 'em!
Posted by Tim Leatherbarrow at 14:06 27 comments: Links to this post

IT DOESNT MATTER WHERE YOU ARE YOU ARE ALWAYS NO MORE THAN 10 YARDS AWAY FROM A LIVE POLITICIAN! 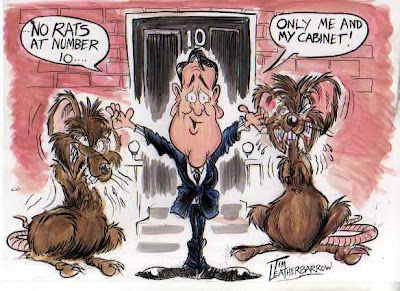 Normally when you see all those reporters outside the door of Number 10 Downing street, the home and centre of democracy and all thats good in the world. You see the reporter with their collars up ,looking like their freezing to death even in summer The poor ol' Policeman bouncing from foot to foot and slapping their gloved hands together as obviously the Kevlar keeps the bullets out, but not the cold. Suprisingly occasionally you'll see somebody in a suit with a breifcase walk briskly in ,or ,for that matter out. Funnily enough, for reasons i've never been able to grasp, the main traffic is people in fleeces with studenty looking backpacks on,and boots with thick treads on, maybe they're dropping extreemly important documents off to help our leaders run the country before leaving them on a train, or in the back of a taxi. Or maybe the stairs in No10 are very steep and they need their student hillwalking gear to get to the third floor.
But then theres the other visitors ,who dont seem to be too shy ,or embarressed at being seen and ,actually seem to be increasingly joining into the celebrity infatuated world in front of the television cameras. The RATS.....Our rodent population are taking after our politicians and Katie Prices of this world and grasping at any opportunity to get in front of the cameras. So if you couldnt be arsed listening to what ever crap is being served up by or about CAMEROON n' CLEGGY..You can just pass a few minutes looking over the shoulder of the reporter and look out for the increasing number of rats scurrying past that famous door. That door that almost symbolises GREAT BRITAIN and the EMPIRE, etc, with hoards of rats scurrying around the doorstep, make of that what you will, as everyone else will. There is a difference between a rat and a politician, slight though it maybe, the rats dont carry breifcases and wear dead smart shiney double breasted suits ,but who knows ,if the media rat explosion continues they could latch on to their potential celebrity status. There are enough rats n rodents running the papers ,media and public relations , never mind the goverment. The rats instead of running it could become part of it. Although some may say ,its already happened, but i wouldnt say such a thing.
Posted by Tim Leatherbarrow at 11:13 15 comments: Links to this post