EDUCATION IS ALL VERY NICE BUT PHYSICAL PAIN AND TORTURE GET YOU THE JOBS ASK JACKIE CHAN. 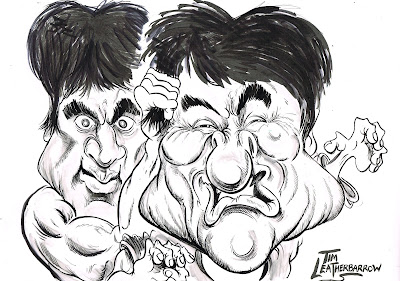 JACKIE CHAN AND BRUCE LEE IN THAT CERTAIN FILM!
As we all know we have to go to school to learn and be educated;Read the text books;Listen to the teachers;Do our sums and learn our tables;Read latin;Read the great literary classics which wouldnt be read by anybody if they werent compulsory in school. WILLIAM SHAKESPEARE? The latin made more sense to me than he did. Then after all this brainboosting educational bootcamp is over we are qualified to go and work...Down the mines; Shovelling shit; Or spending the next 50 years at a desk doing something for somebody else whose doing a fraction of the amount that you are doing for an infinitly bigger chunk of money. Ah you cant beat a good education, lad!
I was reading about JACKIE CHAN the other week and how he got to the lofty heights he's attained. Everybody likes Jackie Chan , they may not be a fan of Chinese martial arts films, but you have to admit he's a likeable fellah and the choreography of the fighting and action is often bordering on genius. He's a bit like the ROY CASTLE of martial arts, whereas Roy Castle played a musical tune on ,well, anything, Jackie Chan uses Anything as a martial arts weapon. He was brought up in a torture camp called a Chinese opera stage school. They did gymnastics ,dance and WUSHU ,which is an acrobatic form of the martial arts as seen in competitions, displays and film. Totally different from the traditional martial art it came from originally. The kids ate a bowl of rice every 3 days got 20 minutes sleep in between excercising ,and getting a good hiding if things weren't up to scratch. Then after years of being forced into strange contorted body positions he left to join the HONG KONG film industry and spent his days making about 5 films a week and each one consisted of him having the shit kicked out of him in these awful original kung fu films. As well as being swung around studios on wire supports as for some reason in these earlier films the KUNG FUmasters could all fly and when they hit a baddy ,the baddy suddenly learnt to fly.
But our Jackie sprung to fame in a real 'Blink and you'll miss it' moment which ,ironically seems to be one of the most famous still shots from a certain film. JACKIE CHAN hit the big time by getting his arm rammed up his back and his hair pulled vicously back snapping his head painfully back. This was done by a certain BRUCE LEE in a little film entitled ENTER THE DRAGON. Jackie never looked back....Not because of any neck injury as a result of the nasty assault on his neck vertabrae, but he put his own twist on the martial arts films pouring out of the HONG KONG studios. Whereas all of a sudden everyone was copying BRUCE LEE esspecially as he 'popped his clogs 'and died soon after ENTER THE DRAGON was finished, so there was plenty of room for the 'new boys', Jackie went far away from Lee and went towards, of all people ...BUSTER KEATON and CHARLIE CHAPLIN ....The silent comedians knew all about physical comedy which in the very serious world of chinese 'KUNG FU' FILMS ,Jackie decided thats what was needed.Fame ,fortune ,international stardom, etc, etc was dumped on his small but perfectly formed frame and thats probably why he's always smiling...... I've been belted ,kicked ,battered had the shit kicked out of me and bear bumps, scars ,aches and pains, etc, etc ,but they never made me rich and famous .I did learn a lot of lessons, mainly when to duck and when to leg it.
Posted by Tim Leatherbarrow at 11:37 4 comments: Links to this post

ALAN DAVIES a.k.a. JONATHAN 'PRICK'...WONT BE SELLING MANY TICKETS FOR HIS LIVERPOOL SHOWS, METHINKS!!! 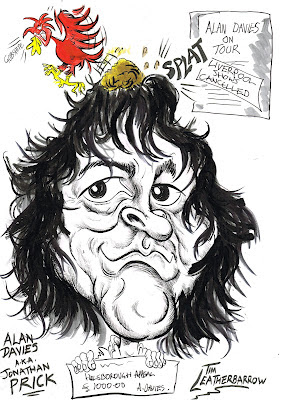 Definitley a fan of humour ,but never having thought about there being a difference between humour and comedy ,up until now .Now the world and telly waves are filled up with the new philosophers and intellectuals......Award winning stand up comedians (accompanyed with that annoying speech mark finger waggle)...Comedy has become the premise of an annoying bunch of tossers who fancy themself as smartarses and by being contraversial they're stars and genius in the comedy world. The latest is JONATHAN PRICK himself ...ALAN DAVIES. The sidekick made to look like a cute knobhead to the genius of STEPHEN FRY'S super mind on QI. But he decides he'd make his feelings about the attitude and respect that LIVERPOOL F.C. show towards 96 fans killed at HILLSBOROUGH known on his blog, admittedlyit was  many years ago, but not long enough for the injustices and smear tactics used by the media and authorities against the dead ,injured ,club and city to be exposed and forgiven and real justice for those who suffered and still do. He thinks it should all be forgotten ,but says it in his smart funny way ,so how can us scousers with our legendary sense of humour not be tickled by this legendary wit? I somehow think ALAN DAVIES wont be selling too many tickets in Liverpool for a while.And it does seem Liverpool isn't on his next tour.
Posted by Tim Leatherbarrow at 15:49 7 comments: Links to this post