FORGET DEBATING POLICIES,POLITICS SHOULD BE A GOOD SMACK IN THE GOB AND A KNEE IN THE NUTS !! 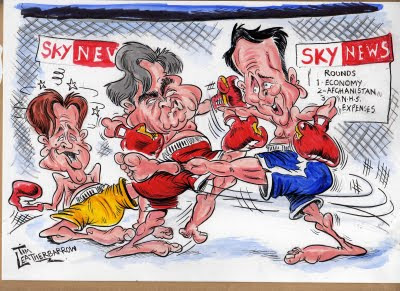 Sky news are trying their hardest to get our party leaders together to do a live pre election debate ,live, or as live as politicians can get, on the telly to battle out the policies and the rest of the bullshit they feed us every day and give us a chance to determine whose bullshit tastes better than the others bullshit. The yanks have been doing it for years and they are connesseures of chateau de bullshit. Maybe their fine palete will be cultivated by us brits. Personally i think we should forsake the round table of debate and go into the round cage of cage fighting. I'm sure Sky's beloved leader Mr Mad axe- Murdoch would be more at home screening cage fighting on his networks than policy debates, hard hitting and far reaching though they may be. The viewing figures for Brown, Cameron and Clegg ,barefooted and kicking , kneeing, elbows, headbutts and roundhouse kicks to the face body and all points south of Westminister would be astronomical and knock Strictly come dancing into a cocked top hat. And as for the X-Factor, wouldnt get a look in.
Traditionally politics is dead easy and boring, you've got the shower in power and the rest!..Whatever the shower in power say, goes, is it!...The others the opposition disagree with absolutly everything said n' proposed by the shower in power. So, they have the best and easiest job in the world. Then when and if,god forbid, they do take over they just blame all the screw ups and fuck ups on the previous shower in power ,and that the policies that screwing up the nation were initiated when the previous shower were in power, and its nothing to do with the present shower in power....Simple, really and brilliant in its stupidity. 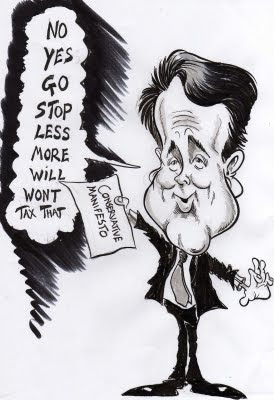 Being an opposition ,or shadow minister is a wonderful career for all us lazy, bone idle ,unqualified arse'oles..... You don't actually do anything, even if you wanted to and you get to look good on the telly, as everyone hates the shower in power, or the goverment , as they are known to those who understand the workings of our great democratic system. So, by disagreeing with them, you can't fail to come out on top. 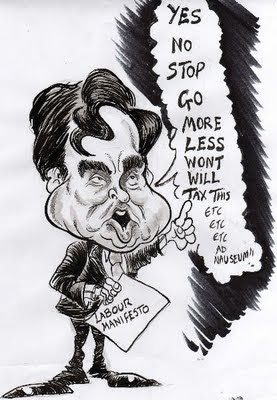 But the worst thing that can happen is that they vote you into power, and you might be put in that very awkward position of actually having to do something, not a lot, heavens forbid, but something , from time to time. I think,in the future you'll see a lot of MP's expenses going on gymn memberships as various debates and even prime ministers question time moves from across the table to inside the round cage fighting ring due to be installed , within the house of commons. Prime ministers question time will be peak time viewing.

Posted by Tim Leatherbarrow at 20:56 11 comments: Links to this post 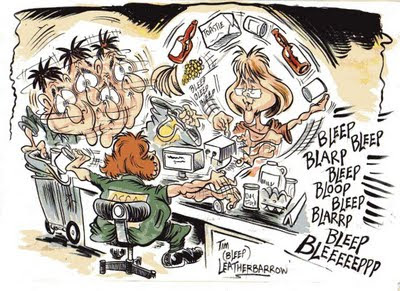 Once long ago the world rang to the crack of rocks being hit together or cracking animal skulls. Then as stuff got harder and sharper man invented wood and metal and the world echoed to the splintery wooden sounds ofwooden things, and rang to the clangy metallic sounds of metal things that these simple folks made their tools and weapons from . But not now! Now, everything goes 'BLEEP!'... This bleep will then be followed by another 'BLEEP!'....And yet more Bleeps and on and on it goes . Where once Bleeps were part of Science Fiction comics and films. Bleeps used to launch rockets or detonate atom bombs, basically something bold and exciting. But now the once impressivly dramatic BLEEP!..Is no more. It is a mere Bleep on every single electronic item in the world. Telly', Dvd's,computers, Telephones, etc, etc, etc.....But BLEEPSVILLE has got to be the supermarket.A cacophony of bleeps ,making it impossible to speak or think.
As me n' the missus stand at the checkout, the assistant , her hands a blur shovels the 'stuff' past the till,emitting just a sonic explosion of Bleeps, meanwhile she's passing receipts and various cards and tickets all accompanied by bleeps to my missus. Who while juggling and packing the shopping is inserting credit cards where they should be inserted, with Bleeps. And tapping numbers with loads of Bleeps. And while this blur of activity and bleeping goes on , she holds two conversations...One with the checkout girl and the other to me. This is about stuff like.."Dont put the eggs under the dog food ..Don't put the grapes under the house bricks, or whatever, etc, etc"....This amazing display is, apparently a new discovery ,or just 'the norm' given a new name ...MULTI-TASKING.
Apparently men can't multi-task. This is obviously rubbish. Ok, women can be busy little bees around the house and shops, but this is all physical stuff,almost an automotive- reflex action, just turn on the switch and off they jolly well go. Whereas we men are more cerebral in our multi-tasking. The other night i was reading an X-MAN comic on a cd dicc on my lap top,watching t.v drinking a glass of wine, thinking of a cartoon idea and scratching my crotch. As well as grunting at the missus in response to whatever she was going on about. And none of my activities involved any bleeps...oh the telly remote and my lap top with the comic disc did ....OH(BLEEP BLEEP!) IT !!!!
(HA! Magazine humour.co.uk)
Posted by Tim Leatherbarrow at 13:45 7 comments: Links to this post

I WISH THE MOANING MILITARY WOULD LEAVE OUR BRAVE POLITICIANS ALONE! 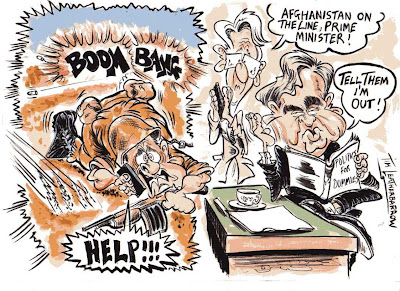 The other day two of our brave ministers packed their summer gear and factor 300 sun cream and jetted off to meet our boys 'on the front line'(or 30 miles, or so behind).In Afghanistan.
While they were bravely shaking hands with the troopers before dinner. One loud-mouthed brass-necked trooper blurted out a demand for more men n' equipment. Our highly trained ministers without thinking, leapt into action, putting on a concerned, yet by adopting full eye-contact , an interested look on their faces. This earnestness was compounded by the folding of arms with the 'getting down n' dirty ' look of rolled up to the elbow shirt sleeves, resting on their ministerial pot-bellies. And then tried to put the troopers mind at ease by a promise"That something will be done."But you only had to look at the people involved to see who is having the harder time of it, at the end of the day. This poses the question.."Which is the sharp end and which is the blunt end?".....The soldiers were fit and bronzed; Smart and in good humour and high spirits....Whereas the politicians were overweight, with the buttons of those summer shirts straining at their bellies; Their face were lined ,and their smiles were forced. Although their grey hair was well-coiffeured it was still a little wispy.
The soldiers regulary face the screaming hoards of the Taliban and various terrorists; Missiles, road side bombs, suicide bombers, etc,etc. But its all old stuff to the British army ,we've seen it all before and give them 'a good seeing to!'.......But he politicians have to face the screaming electorate, fight debates, attend conferences staying at top hotels, their every whim top-class catered for. Attend social functions and appear on televiion. They have to slash services they dont use; Cut benefits they haven't any use for and maintain a number of 'second homes,'etc on 'expenses'. Living this hell ,with a smile on their face. And managing to give less answers to straight questions than an SAS man under enemy interrogation. Even coming under enemy fire by the occassional thrown raw egg on telly.
There, if that doesn't convince you who the true heroes are i don't know what will. Forget men and equipment for Afghanistan. We need more MP's; More offices and departments; Funds for committee's and study groups. And, ofcourse much higher expense accounts for our brave boys on the front line of Westminister.

(HA! Magazine humour.co.uk)
Posted by Tim Leatherbarrow at 12:46 No comments: Links to this post

ANDREW MARR ,GUIDE TO HOW TO MAKE FRIENDS AND INFLUENCE PRIME MINISTERS ! 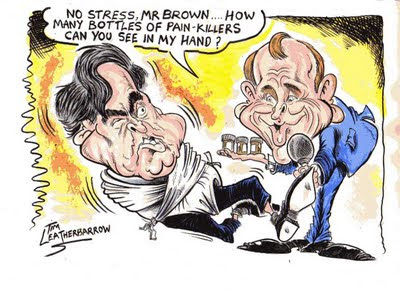 It's easy!..You sit our glorious leader down on a nice comfortable chair in a well-lit labour conference side room, with a smile on your oily Beeb-beeb-ceeb trained face. You, then accuse the most powerful and useless man in the country of popping prescription drugs to ease the stress of the job. The other reason for guzzling these pain-killers is to ease the pain and discomfort of constantly banging into walls,desks and comfy BBC chairs as a result of being half(or two thirds) blind, apparently. This is due ,as everybody must know by now that our beloved PM has the most well-known detached retina the country .As a result of the most well-known Rugby injury in the history of the game. I always thought he had a glass eye, but he's had a couple of similar injuries. So maybe he's got two glass eyes, or two detached retinas, i don't mind admitting i'm confused and worried for our glorious leader.

As any good northern lad worth his salt n' tripe, i watch CORONATION ST (Corrie !)..And followed the storyline of the evil David Platt. He supplied his mum's boyfriend with much needed prescription pain-killers, he became addicted and was totally under David's malevolent influence. Could this happen to our beloved leader? Who is the evil, self serving soul that supplies the PM? Could it be one of his aides or assistants; A strange sort who goes by the name of'Mandy', say? I can see this character weilding his devilish influence over the party, surviving being sacked on numerous occassions in the past. I keep thinking of the PRIME MINISTER and his aide sketches from LITTLE BRITAIN.

Anyhow i don't believe for a moment when our glorious leader made his' big speech' the other day that he needed any drugs to help him.... But i'm bloody sure all those sat listening would've loved some pain killers !
( This bit of jibberish appeared in HA! magazine....Look over on the links for how to find HA!)
Posted by Tim Leatherbarrow at 17:19 6 comments: Links to this post