LOTS OF NAUGHTY LADIES READING '50 SHADES OF GREY' EXCEPT FOR ONE NOTABLE EXCEPTION!. AND ONE SHADE OF SUNBURN RED!.. 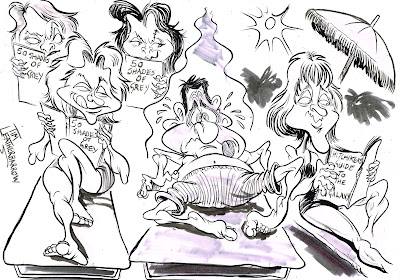 A few weeks ago we were over in ITALY by a lovely lake surrounded by impressive mountains. The lake was where the the opening JAMES BOND car chase in 'QUANTUM OF SOLACE' took place. Apparently the lake and the surrounding villages are connected by tunnels built by that beloved of Italian facist dictators MUSSOLLINI. He decided that the villages had to be connected by these network of tunnels. The tunnels are all named after his ex-girlfriends, well they would be Ex's ,as they're probably all dead a long time, who knows our favourite facist met up with them in whatever afterlife his sort go to. The longer tunnels are named after his favourites, the shorter ....Not so fondly remembered!....Still, not bad, having a tunnel through a mountain named after you and your tunnel used in a Bond film and these pretty (once) Italian Dictator bits of stuff would one day have DANIEL CRAIG powering through you, so to speak!...Mind you i wouldn't like to be 'MUSSO' explaining why certain girls became the shorter of tunnels.
The week or so was very nice ,but "God it was f**kin' boiling hot!!!".....The sun beat down and the only thing we could do was crawl to the bar .....Often!....I sat and read reams of electronic pages on my new KINDLE . I was surrounded by sweating drooling women . I automatically assumed this was due to the unbearable heat and gallons of drink that everybody guzzled down. I came to the conclusion that the women ,who were all reading that naughty book...'50 SHADES OF GREY.'...I also decided that all these sexually aroused women were drooling over me as i ambled Bond-Like cool and catlike to the bar.Did they wonder if thee was another Bond film being filmed. I mentioned this observation to the LOVELY LYNNE....Funnily enough she thought it was very amusing. As every women was reading and being aroused by the '50 SHADES OF GREY'!...Except for one notable exception....THE LOVELY LYNNE, my missus! She was reading 'HITCHIKERS GUIDE TO THE GALAXY' which  is very clever and amusing ,but the late wonderful DOUGLAS ADAMS didn't manage to inject much rudeness and horniness into the story so THE LOVELY LYNNE wasn't turned on, drooling and lusting after me ,anyhow at the end of the day it was my own fault as she was reading this sci-fi classic on my reccomendation. I should learn to keep me big mouth shut. Mind you i think i might've got a few funny looks from my beloved if i'd reccommended '50 SHADES OF GREY' to her. ﻿
Posted by Tim Leatherbarrow at 14:44 12 comments: Links to this post

IT DOES SEEM THE WEAKER THE BODY THE STRONGER THE WILL! 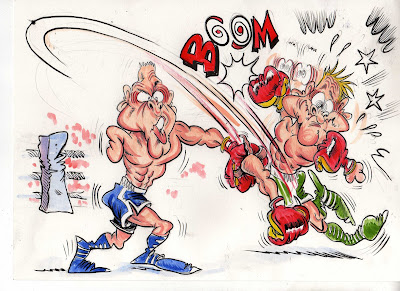 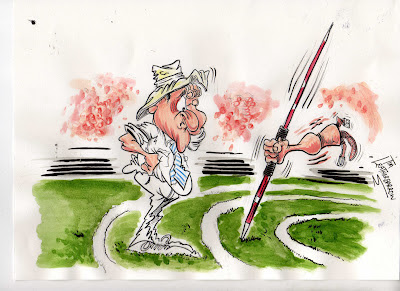 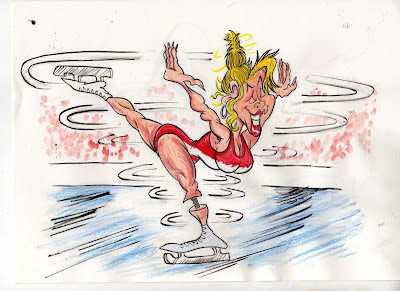 Watching the PARALYMPICS over the last week or so has stunned and amazed me as every day you actually get to see the HUMAN SPIRIT in front of your face and see it working at full horsepower. The HUMAN SPIRIT is something priests and politicians and their speechwriters like to speak about, but watch these 'guys n' gals' competing and its there in your face ;Blind ,deaf, dumb, crippled, limbs missing ,mentally deformed ,etc ,etc ,god bless 'em all they put us all to shame. It struck me the weaker the bodies ,the stronger the will......And i should know having a fine fit body ,but a will of clay......No Olympic medals in the LEATHERBARROW trophy cabinet for the forseeable future anyhow.
Some of the athletes ,as that is what they are, possibly even more entitled to be called so then their perfectly fit colleagues, have problems and deformities from birth, but some are a result of injuries or whatever, deciding "FUCK THIS!....i'm not going to be beaten by the broken back or the loss of my legs !" and they grit their teeth and get on with it.
One guy who got me thinking about the whole thing suffered from some kind of condition of the blood where the oxygen in the blood wasn't able to supply the muscles with the full amount they needed. Basically what that meant to me was that the lad had to train any number of times harder than anyone else as his fitness needed so much more work so his oxygen starved muscles could race and compete ,i think he was in the pool and he won in a world record time ,i think. What about the blind footy players?...Amazing ,all amazing !
The ice skater cartoon was done a while ago when that evil MRS PAUL McCARTNEY....JULIET(?) MILLS was entering CELEBRITY ICE SKATING  and did quite well considering she had a prosthetic limb ,one of her legs which did her bad public relations with the British SIR 'MACCA' loving folks a bit of good.
Posted by Tim Leatherbarrow at 12:10 3 comments: Links to this post

A NOT SO YOUNG NEIL YOUNG AND A PROMISING MUSICAL CAREER RUINED BY A VOMIT CLOGGED MOUTHORGAN!... 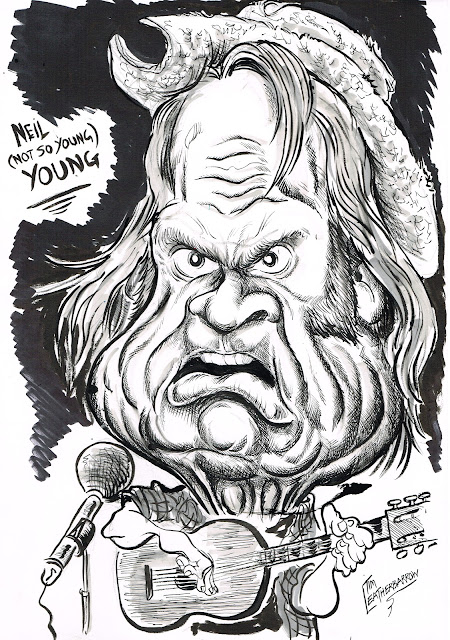 As a favour to a friend JED CLARK i did this piccie of a not so young NEIL YOUNG.....And as i was trying to find a picture of our hero i took the oppertunity to activate that most wonderful of inventions that mankind has developed through the years, you can forget the wheel and the I-Pod .....I'm talking the kettle!......I used to fill an old army tea pot and fill it with loose leaf tea and guzzle a few gallons to help with my many creative difficulties ,i dont know if a few gallons of tea made me more creative or sitting guzzling watching the telly put me in 'couldnt give a shit 'mode. Things aren't quite the same now . And i shall tell you why!.....Women ,thats why!......Long ago THE LOVELY LYNNE entered my life and when the glow of passion and romance dimmed and she started to give ,not advice or requests , but outright orders as women are wont to do when they take control.....She KIDNAPPED MY TEAPOT??????......And i didn't see it for years until it turned up in the downstairs bog .....Full of flowers????.....If you ever come to LEATHERBARROW TOWERS and you are more than welcome, the teapot is still in the bog! Not only did she take my teapot ,but she stopped me drinking loose leaf tea and i've been on tea bags for all these years. But i apologise for the slight sidetrack into my tea guzzling adventures and history , but as i walked into the living room with my mug with two teabags in ,much to the LOVELY LYNNES irritation, its a small pathetic victory over the forces of female coffee drinkers, but its my small pathetic victory!....Anyhow i sat down and who's on the telly, but a not so young NEIL YOUNG!


I know a lot of people who are big fans of NEIL YOUNG ,i have to admit not to being one of them , i've nothing against him and appreciate what he does, but i sat and enjoyed his acoustic show. He sat surrounded by a wall of standing guitars ,banjo's, etc and alongside him was a bucket with a mouthorgan in it. I always fancied being able to play the guitar and mouth organ . At one time i had a mouth organ ,quite a long one about 8-10 inches long. I was in the back of the car on a family trip to Wales years ago running the mouthorgan from side to side blowing and sucking producing what i thought was music of the angels, but my cousin beside me either didn't agree or he was just plain car sick and threw up over the protruding mouthorgan , i managed to freeze my playing the blues dead, or i'd blow vomit over the back of my dads head or suck a gobful of my cousins vomit depending wether i was blowing or sucking as the instrument went back from right to left. I somehow lost the urge to play with that mouth organ even after hours under the tap there was always something that looked like carrot or fried tomato in the workings of that instrument.
Posted by Tim Leatherbarrow at 14:36 1 comment: Links to this post