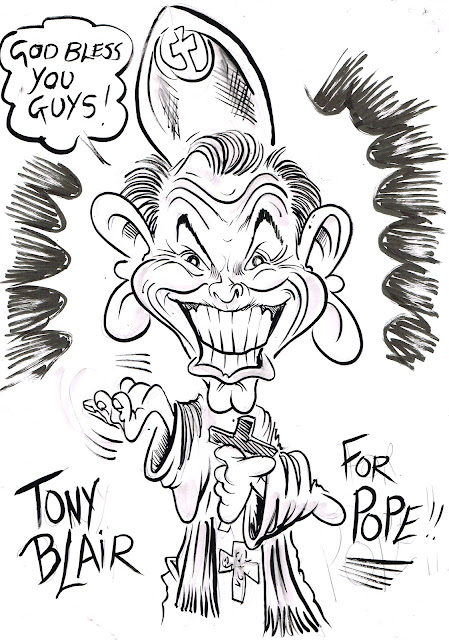 As a good , god fearing schoolboy i was brought up sampling the daily wrath of the catholic brothers at school, Jeez! They were evil, nasty bastards and you kept your head down and did what you were told ,or else!......It's ironic how christian brothers ,catholics ,etc are portrayed as lovely genorous blokes an beloved by their bretren. The sneakiest place on Earth ,even dodgier than the Kremlin and the White house is the Vatican ,the home of the pope and his crucifix weilding mafia. Through the years the popes and Cardinals have been even meaner swines than the brothers at my old school. I s'pose in the Vatican library is volumes on torture  and various ways of using and mastring branding irons n' stuff, all good stuff.

Some of the smiley eyed popes have had 'dodgy' histories ,wasn't there talk of the recently resigned Pontiff having dodgy dealings in his home country of Germany in those less than glory days of the Nazi regime. But i'm not applying for the job as The Lovely Lynne doesn't want to take the young 'un out of school to live in Rome. And neither of us are too keen at having to go to church on Sundays again.

But there is a cool ,loving ,god fearing man , who has a lot in common with god n' stuff. and would enjoy travelling the world being beloved by everybody....Only the would be President of Europe and the Middle East ,TONY BLAIR!....He'd be damn near President of the world, but might have to wear a dress. It would really piss GEORGE BUSH off as i think he'd like to be Pope, but can popes start wars these days ,in th old days the could get a crusade up, but who knows. TONY BLAIR  is a slimey weasel and with a dodgy background ,....I deal for when the Cardinals pump out the white smoke!
Posted by Tim Leatherbarrow at 15:01 153 comments: Links to this post 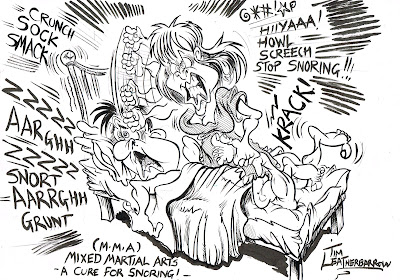 One night recently i was sitting alone as per usual killing the night hours flicking through the 10 million channels trying to find one with something on which wont make me react with the usual ,"Oh bollocks to this i'm going to bed!"....Not an easy task. I found a documentary about the old heavyweight boxers through the years, JACK JOHNSON,JACK DEMPSEY ,JOE LOUIS, ROCKY MARCIANO,and various hardcases of that ilk, and facinating stuff it was too. After was a slightly updated form of smashing peoples faces in ...The Cage Fighting MIXED MARTIAL ART(mma). All these somewhat excessively tattooed ,shaven headed fellahs meet in the cage throw a few kicks and punches, progress onto knees and elbows ,then try to ground each other and just try and break arms and legs or pummell the faces of their opponent,all very entertaining blood splattered stuff for all the family. After watching some quite good battles i went to my bed .

The Lovely Lynne has always hated my ability to close my eyes and ,well just totally'flake out', fast asleep, no matter what is happening ,or what noises may disturb anyone else. I put this ability down to my healthy disposition and pure clear consience. In my dreams i felt i was in 'The Cage' in a fight. My opponent had just whacked me in the gut with a front thrust kick; followed by a fist around the head ;An elbow in the gut; A knee in the thigh ;Aleg lock :an arm bar with the other leg and arm,whilst with the other fist my goodlooking facial features were being pummelled by her hammerfist. This quiet graphic dream caused me to wake to find that the Lovely Lynne was practising these very MMA techniques upon me to stop my snoring....I think she wants a cage around the bed, not for kinky sex games ,sadly, but i think she just likes knocking seven lumps out of me.

She's probably better than the pro MMA fighters, they fight 3x 5 minute rounds to knock the other guy out....The Lovely Lynne has to beat the flat out me awake and then knock me out again....Without the snoring, of course!﻿
Posted by Tim Leatherbarrow at 17:08 1 comment: Links to this post

THE TERRIBLE REVENGE OF FRED FUMANCHU !!!!!

﻿﻿﻿                              Good hello to one and all ! This is an attempt by a poor penniless cartoonist ,and if the GOON SHOW PRESERVATION SOCIETY have anything to do with it will continue to remain a poor penilless cartoonist....Tthey begged and pleaded with me to try and visualise the insane twisted ,distorted vision of the world that the twisted,distorted mind of a certain chap called SPIKE MILLIGAN possessed never more obviosly than when he wrote a certain radio series for 'AUNTIE BEEB'...What else, but 'THE GOON SHOW'!  A whole universe of total imaginary ,well ,insanity!!..The secret of the Goons was ,and is, quite simply, Milligan aimed at the listeners imagination, no explanations were given for anything ,no matter how incredible or insane it may be (theres that insane word again,i apologise ,but it just is the most apt word to describe the insanity of the Goon show, see what i mean?)....My job ,quite simply without the aid of a safety net ,CGI, or anything is to convert this imaginary world into ink,see no bother! Shouldn't take too much effort or pain??????

I dove in with the TERRIBLE REVENGE OF FRED FUMANCHU !!!.....And away we go!!!!....Be gentle with me.
We are back in the good old days of 1895 at the year of the great exhibition at Crystal Palace. It is the highlight of the whole event ....Only the concluding round of THE WORLDS INTERNATIONAL HEAVYWEIGHT SAXOPHONE CONTEST.  This was a true 'Clash of the Titans'.....

From the eastern orient....
FRED FUMANCHU
And his
BAMBOO SAXOPHONE

English all over
MAJOR DENNIS BLOODNOK

As the competition begins FRED FUMANCHU'S symphony for a bamboo saxophone is soundly beaten by a lone'TOOT!' from a british saxophone and a rousing chorus of the not at all partisan red, white n' blue crowd of "THERE'LL ALWAYS BE AN ENGLAND,ETC,ET,".....
Not too pleased with this state of affairs our oriental friend is no longer our friend and swears(bleep!) 'Levenge on Blitish White man.
He returns to his bubbling cauldron in his rabolatory in Outer Mongolia to concoct a hellish brew, that once dlunk by stoopid white man,a single dlop will cause anything he points at to explode. 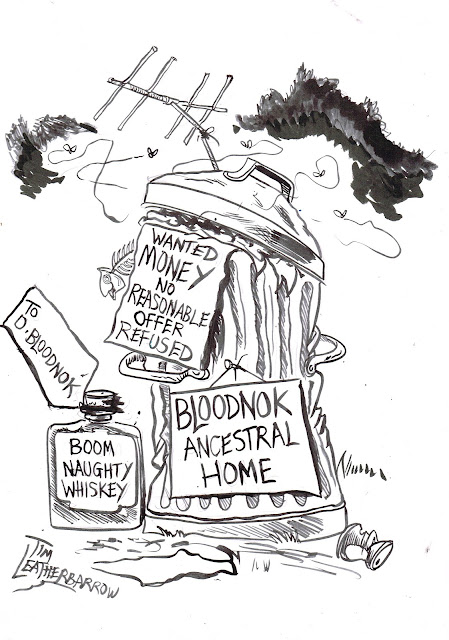 Disguised as a bottle of whiskey the hellish brew is taken to the BLOODNOK ancestral home in Hyde Park ,one of the oldest dustbins in the whole of Hyde Park. BLOODNOK recognised the oriental with bamboo saxbut wantin to be sue he was an inscrutable eastern oriental  and asked had he heard of 'THE boxer rising?' ..."Only after a count of ten!", Satisfied with this answer and obvious proof that the oriental is oriental with this knowledge of all things oriental ,BLOODNOKdrinks the bottle of whisky and excuses himself for some rather alarming gastric emissions. Fred thenm offers BLOODNOK five shillings if he'll do him a favour. 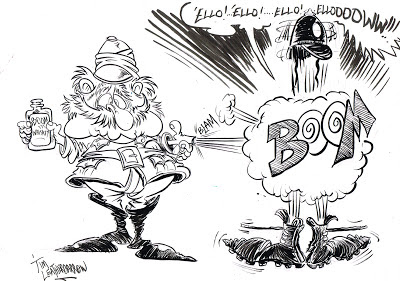 ....For money BLOODNOK is enslaved and complies pointng his finger at a policeman who suddenly explodes....Fred has Bloodnok in his power and under the influence of money  Bloodnok blows 27,000 metal saxophones to bits ,while Birmingham put four past Arsenal....This tradgedy appalls NEDDIE SEAGOON...aka...NED OF THE (Back) YARD....As Arsenal missed a penaltyand he blames th referee, but he is onto the saxophone case and offers a 1,000 pounds reward for any help. Funnily enough our favourite fans of all things MONEY arrive cunningly disguised as EIFFEL TOWERS, but wearing anti exploding saxophone vests, no idiots are GRYTPYPE - THYNNE and his much side punched and side kicked side kick MORIARTY. After accepting an oil painting of a 300 pound cheque and getting it cashed at the ROYAL ACADEMY our heroes after discussions about qualities of refereeing at the Birmingham game are off on the trail. 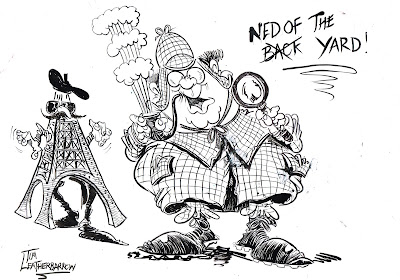 Sharp as ever Ned points out that two Eiffel towers might look suspicious GRYTPYPE - THYNNE suggests Ned disguises himself as Nelson atop his portable NELSON'S COLUMN(on wheels)rendered inconspicuous by being wrapped in a cardboard replica of CHARING CROSS STATION..See what i mean about the difficulties of drawing this stuff?  Cashing a further 50 pound water colour cheque at  the Royal institute of water colour painters our heroes find FRED disguised as JIM..."No chinaman would have a name like Jim!"Fred/Jim is appearing  at the Adelphi,Our heroes cunningly surround the building from the front and the back,thus FRED escapes from  the side! They shoot and wound him as can be seen by the trail of fresh noodles and preserved ginger as Fred races for Dewsbury home to the last metal saxophone player in England. 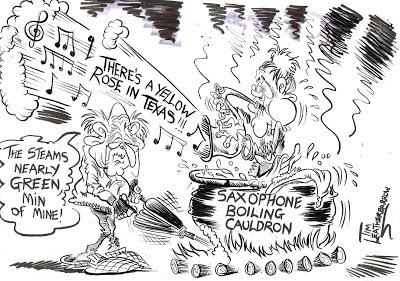 To the strangled strains of "There's a yellow rose in Texas"MINNIE BANNISTER shrieks and howls as HENRY CRUN heats up a cauldrum trying to immunize the last saxophone with green steam ..... 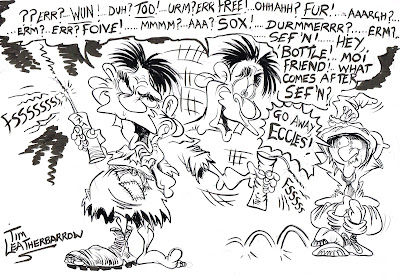 Ned elicits the aid of a strange son of the regiment BLUEBOTTLE, ever ready to do good with his faithful 'thing' ECCLES. Ned hands a stick of dynamite to 'Bottle' who gives it to ECCLES To light and count upon inquiring how many to counttoo, the helpful reply is?"..."Just  count  how long it takes then you'll know,wont you?"....ECCLES Does just getting stuck at 7 ,so asks his friend BLUEBOTTLE what comes after 7 and much to 'Bottles' disgust the two are blown to smithereens. BLUEBOTTLE demands that ECCLES "you rotten swine!" wipes his custard like remains off the wall and take him home.
After a ridiculous exchange between NED ,MINNIE and HENRY about whose at the door which i wont even attempt to illustrate, they are attacked by BLOODNOK defending his friend FUMANCHU and trying to get the metal saxaphone for him, but his loyalty is changed when NED offers more money. NED and GRYTPYPE attempt to get under FRED'S kimono to drill holes into his bamboo saxophone ,but he hears NED typing his plan and blows NED and GRYPTPYPE up as well as BLOODNOK for betlaying him.
The show finishes with WALLACE GREENSLADE selling tickets for a lecital by "FRED FUMANCHU THE WORLDS ONLY BAMBOO SAXOPHONIST....I thank you!"