SWEAT,SNOT,FLEM,WHEEZING LUNGS LIKE BAGS OF FROG SPAWN, YES , FOLKS ITS THAT FUN PACKED FLU-TIME OF THE YEAR. ! 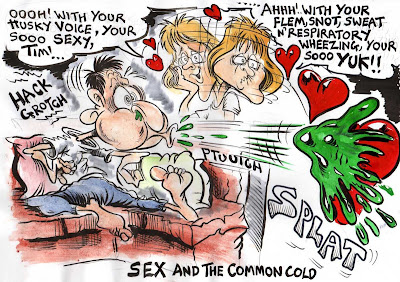 Yes, it's that time of the year! It starts of easily enough the throat is a little tight and your voice sounds a little husky, and even (possibly) you might be in for a bit of 'lurve'in' from your beloved due to your movie star vocals. But this is highly unlikely, so as the days pass the throaty, husky sound is replaced by a squeaky tone as the lining of the throat is ripped off by deep racking coughs ,which you pull from the soles of your feet to scrape the length of that itchy irritating windpipe. At night any sympathy your dearly beloved may have had for you is rapidly dissipated if not totally extinguished by a combination of,Racking coughs ;Wheezing lungs, which, sound like the dogs squeaky toy with a variety of different squeaks n' sqwarks as you inhale or exhale :The snorting and sniffing as you try to get life helping oxygen into your flem filled lungs. This inability to breath through the nose leads to holding the mouth wide open and exacerbates what, i have reliably been informed through the many happy years of my marriage to 'The Lovely Lynne', my amazing snoring ability.

Then, the daylight hours. The problems encountered have a slight twist.Plastered in sweat ,steam coming out of your collar, sleeves and socks. Your sprawled out on the couch watching the telly. (Just recently, we had Sky+ fitted, its great, so i'm watching recorded films and television series and haven't watched an advert in weeks. Quite frankly, the flu can stay as long as it wants.) But ,from time to time, i feel like i've swallowed a housebrick ,it wont go down so its got to come out. When we were at school, horrible snotty little bastards we were. We would 'Gob', anywhere. We would also take great pride in the size of this great green glutinous mass we'd just 'Gobbed onto the deck. The girls were often quite impressed too. The fascinating thing is, in an average day i can 'cough up'(..Don't Gob, now i'm all grown up)..About x5 my body weight in snot n' flem. I thought i could put it to good use and build a sculpture, a little like Richard Dreyfuss moulding that mountain with all that mud in 'Close Encounters of the Third Kind'. But, i could do a sort of 'Collossus of Rhodes 'standing astride guarding the front drive of the house in dryed out crystalline snot n' flem.(A Flemish masterpiece?...no?,ok then). I can see it now 50 feet tall in Emerald green. The Lovely Lynne wasn't keen though, she's happy with a rockery.

Last night the telly had a new series'Survivors' about a bunch of gorgeous trendy, with it young actors who survive a Flu-pandemic that wipes the rest of us, that aren't as good looking enough to appear in the increasingly cliche'd casts of every sci-fi, cop.spy telly series that they 'bang out'. Basically every series made in the last few years has got to have a young pretty,but feisty,with attitude(etc,etc,) cast with the correct levels of sexual and ethnic representations in the mix. And maybe an oldie, over the age of 25. But a gorgeous cast and computer special effects is what we all want, apparently. I've just had a thought, how about taking the cast of "I'm a celebrity get me out of here!". Then swapping them for the cast of "Survivors"?..Onr thing about that "Survivors", idon't know if the flu actually killed everybody. Or, that they're sprawled out on the living room sofa working their way through all the programmes they recorded on SKY+.
Posted by Tim Leatherbarrow at 14:37 2 comments: Links to this post

WOOLWORTHS ON SALE FOR A PENNY!..GIVE ME 50, AND A LOAF OF BREAD, SO ICAN HAVE A ROUND OF TOAST AS I WATCH THE MILLIONS FLOOD IN! 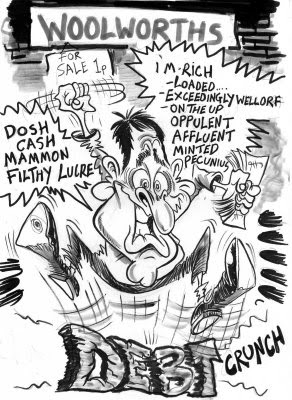 We ,undoubtably live in dire, dark times. Recessions, credit crunches, Financial meltdowns, banking 'balls ups, Goverment' fuck ups' and a whole array of banky financial terminology that us men on the street, (now, in many cases,permenantly!) would never be able to understand. But for some of us for whom the survival instinct runs deep, and partly due to the fact our height measures only 5foot 6 inches, on a hot day, in thick socks, have their ears close to the ground, which explains why i didn't hear the snippet of financial news which is about to change my life. So, standing up straight taking my ear off the cold ground,which, apparently may explain touches of earache, recently. No, it's not the missus, the Lovely Lynne ,thats not an ache, thats more of a pain!...But, Woolworths're going to sell their highstreet branches at a PENNY!.....YES A PENNY!, a shot. So i'm racing down to the cash point. Technology being what it is, i can't have a penny, so i'll have to get a fiver, at least. So, i buy a heap of Woolworths branches for a few bob then sell the stuff inside. I can't lose. Even if i knock the prices right down ,or 'slashed', as we in the retail trade say. On top of making a fortune, its solved my christmas present headaches as well.And The Lovely Lynnes credit card bill, after running up horrendous amounts ringing to keep John Sergeant on" Strictly, celebrity ,i'm a ballroom dancer ,get me outta the x-factor,on ice", or whatever. So, you lot may be suffering from credit crunches ,but due to my quick thinking i'm Debt crunching .


Just before the financial news, i referred to came on the news ,some baseball cap wearing 80 year old hip-hop skateboarder was on the telly, i was shocked and amazed to see it was 'Brucie' Forsythe. He was on about a certain fat political journalist leaving a certain dance show. I thought it a shame that the judges on the show gave him such a hard time. The Lovely Lynne is the one who watches the programme, its just on in the background for me, i'm too much of a man to watch cissy dancing n' stuff, i've got dinner dishes to wash. they don't do themselves y'know. But, to be fair the amount of training that they all put into the competition is impressive. Ol John Sergeant may not have been a top dancer, but he was an entertaining character and he gave it a good go, coming ,as he did from way, way ,behind the others start lines, due to his age and physical condition, etc.As has been said. The Great British public like the underdog; don't like authority and being told what to do and 'whats right'. So, the public had a chance to 'shove one up' em', and took it. Personnally, i think the judges should retire.
But, now! Don't get me started on the F*************'IN' X-FACTOR!!!!!!........ For similar reasons, as the dancing the Leatherbarrow house rings to pain in the arse wanna be "its all i've dreamed about, since my family dropped dead"pop stars ; Gob- shite boy bands; Hairdressers and tanning salon employees girl bands, etc, etc. If they want to be 'pop stars ,go out on the road and play and do the bloody job, instead of rehearsing mariah carey songs and dance moves in your flamin' bedrooms. Simon Callow and Louis Walsh, you've a lot to answer for, you bastards!
Posted by Tim Leatherbarrow at 10:04 No comments: Links to this post

NEVER TELL A BOY SCOUT TO GET KNOTTED, 'COS LIKE A DOG LICKING HIS COBBLERS, HE WILL 'COS HE CAN ! 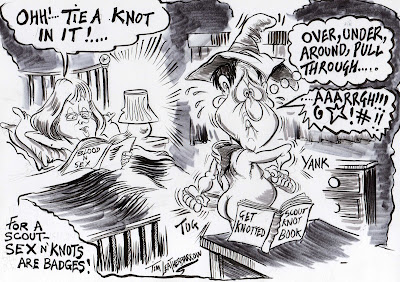 Once upon a time when i were 'nobbut a lad,' i was a cub scout, i never got as far as being a full blown scout. As our cub pack was very possibly the lousiest cub pack on the planet. Lord Baden Powell, gawd bless 'im, wouldn't've been too impressed shall we say. If he'd seen us ,he would have slunk away to a quiet place ,picked the correct knot and hung himself. There was a badge ,which, apparently was the basic badge. The 'Bronze Arrow'. This badge was the first, taking only weeks to attain, before you moved onto more heady things, like the Silver and Gold arrows. It took us 4 years to get our Bronze Arrows. This great achievment wasn't attained through a deep understanding of knots or tent poles. No, it was because ,we survived 4 years of being a cub in our 'pack' . We would turn up on a Wednesday evening all woggled-up and ready to go. Basically all we did was beat the shit out of each other in endless games of 'British Bulldog'. I can't quite remember the rules(?)...But it was something about ,if you were 'it', everyone else charged at you and you had to stop them , so someone else'd be 'it'. I think the game was so named, after so many games the battered veterans of 'our cub pack' had faces like the British Bulldog doggie has been blessed with.
My darling daughter ,has now become a Scout and seems to be building up a fine collection of badges. A damn site more than her daddy ever did, it must be said. But,on the minus side, kids don't know how to play games like 'British Bulldog',anymore. Another part of our fine British heritage fades into the P.C haze of modern life and methods. I was stunned and shocked to be told that the kids are being taught SEX EDUCATION!!!!..... Cubs, Scouts and Beavers(not naughty) Do not have sex n' stuff. You can get badges for everything to do with knots, tents and tent poles, but now its not only tent poles that're studied. So, the kids sit in a muddy field and learn about what their mum n' dad used to do. So when they one day find themselves trying to get their 'leg over' with their beloved missus, she can and will tell him,' to put a knot in it' ,and he can.In fact he can choose from a whole arsenal of knots he's qualified to use for any occasion, including this. Mind you, nobody in my old cub group'd be able to do anything to incorporate knots to dampen their ardour. The Bronze Arrow, never covered this, in my day. A good game of British Bulldog n' a cold bath were 'good enuff fer me!'
Posted by Tim Leatherbarrow at 13:42 1 comment: Links to this post