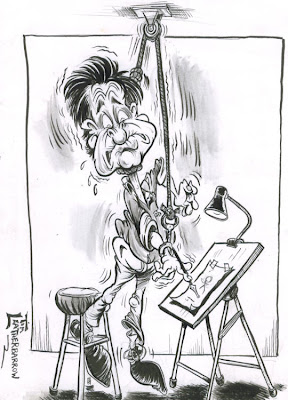 The poor lonely man sitting on the living room carpet stuffing his face with a bacon butty and drinking bucket sized mugs of tea watching the re-runs of Lovejoy on Sky's YESTERDAY channel isnt a deadbeat layabout, although a certain,high number of people might argue that point....Or a television critic. Actually it might come as a suprise to many people he is an exceptionally talented cartoonist and caricaturist and did quite well for quite a while. Alas these days aren't much fun for the cartooning brotherhood and lest we forget ,sisterhood. But i've forced myself back into that cluttered shithole laughingly called a studio and taken pencil, brush and even experimental ink pen in hand ,depending on how i feel to create new master works ,christ knows what'll become of them , who knows maybe i'll be discovered again....Hmmmm ,well ,stranger things have happened in a close in the wilds of Warrington, very strange things happen in the wilds of Warrington believe me. I have always stood at my drawing board, occassionally sat while inking , but after a day of that ,i'm physically shagged out and my eyeballs are about an inch and a half protruding from my skull ,which is bad enough ,but compounded by the fact i'm damn near cross eyed too. Oh the joys of cartooning . Scraping the imagination for what to draw then the grind of getting it down on the paper. And after all that ,at the moment theres nowhere to send it, just the blog and Facebook. But i know i keep saying it ,you'll be hearing a lot more rubbish from your beloved leader as i've decided to get me arse into gear....Honest!
Posted by Tim Leatherbarrow at 12:40 7 comments: Links to this post

DOGS ,MANS BEST FRIEND???? IF MY BEST MATE SHIT ON THE FLOOR I WOULDNT PICK IT UP! 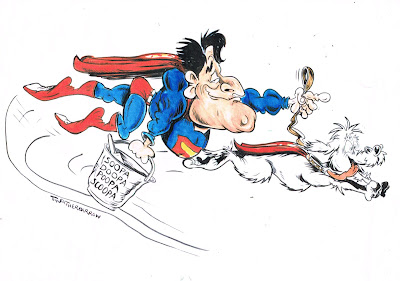 If i put my coat on; walk in the room where my coat is; If i say the word 'walk', the dog goes absolutly apeshit and is teararsing round the house and jumping all over me and trying to get mouthfuls of the back of my jacket and the sleeves in the excitment at the prospect of 'going out'!...The toal joy and excitment is infectious and i can't help laughing as i'm diving around the place like people chasing chickens in an attempt to put his lead and collar on. I am always amazed how he's not totally 'shagged out' by the time we get outside ,cos i know i bloody am.
Its of constant fascination to me how much the little sod can pee.....I reckon he could refloat that grounded cruiseship with the fluids he pumps out in a 10 minute walk in the woods. These days being a good respectable member of the community and terrified of my missus who has ordered me to utilise those very odd inventions ...POO_BAGS!!! If the little sod has one of his many bowel movements in an open area or path i do my stomach curdling task, when you feel that warm soft feeling through this frighteningly thin feeling layer of plastic. When he's racing about chasing squirrels or sniffing things n stuff, he dissappears into the undergrowth and does whatever his little insides want out of the sight of man and dog warden so thats poo-bag free poo's which is fine by me....
If i was coming back from the boozer with my best friend and he wanted a 'movement' he'll have to go into the bushes 'cos i'm not using a Bezzy-Mate pooper scooper for the movement of 14 pints of Guiness and a chicken n' chips for anyone.
Posted by Tim Leatherbarrow at 13:54 24 comments: Links to this post