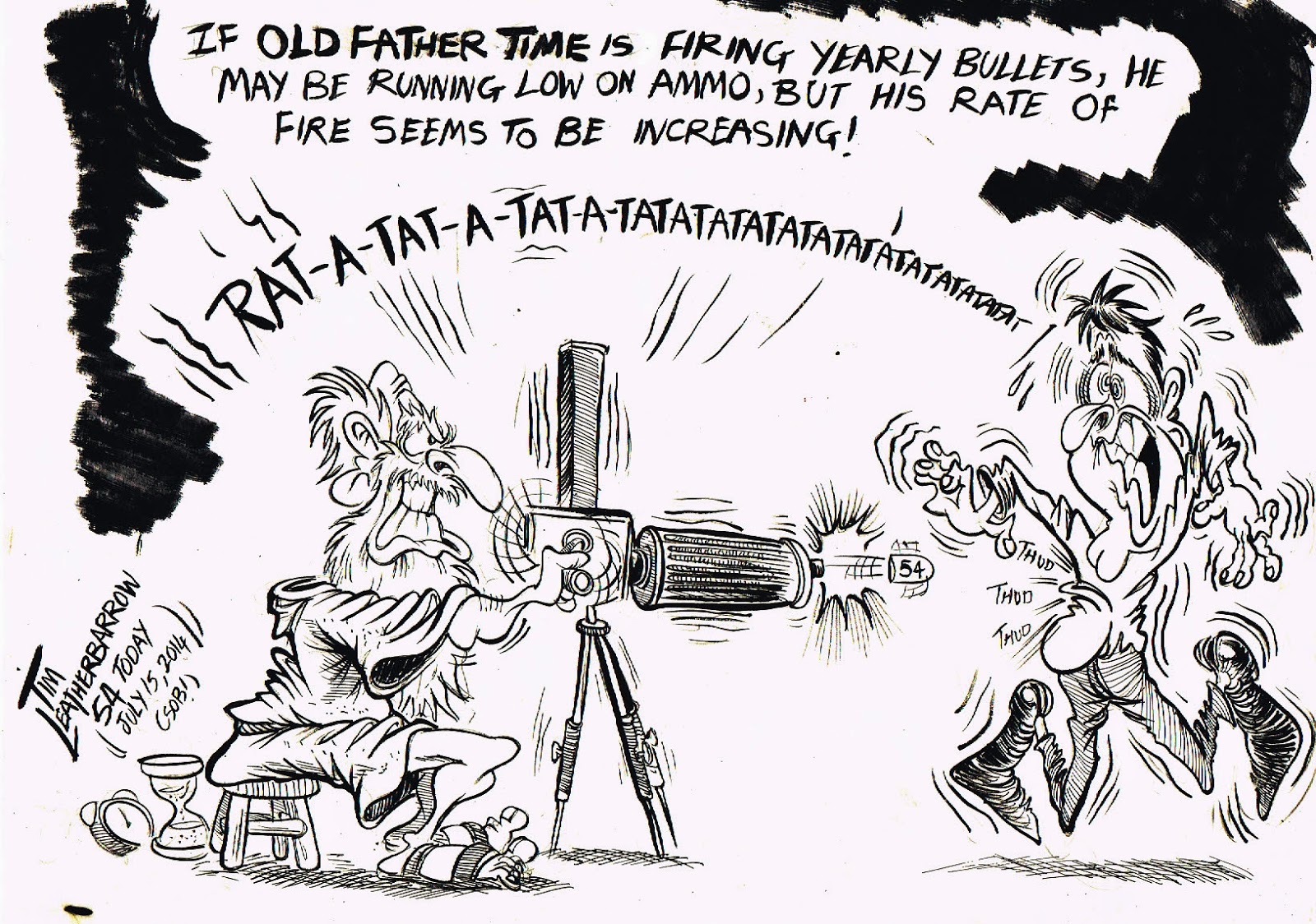 The other day as i was starting to blubber, sob and generally embark on a total emotional collapse at the prospect of the next day being my 54 th birthday.....This harrowing prospect was compounded by our beloved 'JESTER' editor ,tha t ELLERY person who went and  got in touch to see if i would do a blurb on 'AGE?'.....So i found a prominent vein and sought a sharp knife, but as we have a brand new kitchen i couldn't find the cuttlery draw, so i could end it all ,so i s'pose i'd better write something.

So now i've hit the far too advanced ,as far as i'm concerned , age of the big 54. My daughter whose birthday falls on the same day as mine (15 th July), she's 16 and combined with a big operation in hospital which she's just getting over meant that my thunder was well and truly stolen!


So another year has ripped through the calendar, far quicker than the previous year ,which was faster than the previous years.....If  OLD FATHER TIME IS FIRING YEARLY BULLETS , HE MAY BE RUNNING LOW ON AMMO, BUT HIS RATE OF FIRE HAS INCREASED!!!!....When i see pictures of myself as a cute little baby in old black n' white photos with cute little black n' white sailor suit with white dummies.....Teen pictures were full of colour ,now as i look at myself in photos ,the photos are in digital colour ,but i'm in digital grey and white and getting more so. My character forming crinkles /laughter lines are now just plain old wrinkles. This isn't just a build up of birthdays, but a full blown law of the universe, One of the laws of Thermodynamics the 'LAW OF ENTROPY'.....There you go, you thought it was just age ,but never dreamed you were a indesputable  law of physics.

Entropy is quite simply the decay and increase in disarray and chaos in the whole universe. Whenever they demonstrate it on telly science shows , they ussually show a cup of coffee falling off a table to shatter on the floor, exploding into fragments all over the floor. The human body is a little like that ,except it was in a plastic bag , so the cup explodes into fragments within the bag which is our skin, so the cup and the liquid within are our 'innards'. So our early days are whizzing through the air, all joyous and fun ,then comes a moment of impact around our late teens ,early twenties when we start to crack and break up and as the years pass the bits become more disconnected and less efficient and our innards become more disconnected and disjointed within our fleshy sack which is supported by muscles and holds the insides in check. As time goes on the muscles fade and the body takes on a more 'portly' demeaner, often referred to as 'middle aged spread 'as the innards are forcing their way out as we shrink ,but widen.The skin which as age eats into us loses its healthy glow ,paling to match the grey of the hair ,or whats left....The elasticity is lost and becomes more parchment like and the broken entropically ravaged chaos inside does tend to make the odd break into the outside world via a variety of spots ,abcesses and puss- pumping poc marks. Which isn't pleasant for the person involved or those around.

People always go on about wisdom comes with age......Or is it failing mental faculties ...Wisdom or dementia?....I'm not sure i can't remember what i was on about!

Posted by Tim Leatherbarrow at 15:30 No comments: Links to this post