THE NEXT VERSION OF 'THE PLANET OF THE APES ' COULD BE ON CROSBY BEACH ON THE BANKS OF LIVERPOOLS OWN RIVER MERSEY! 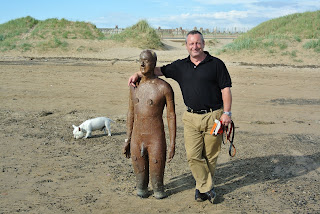 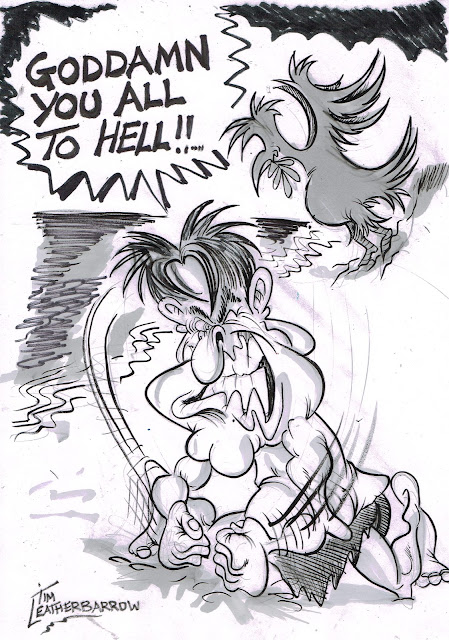 The other day we had a wander in 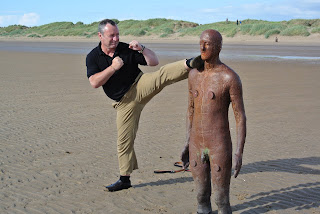 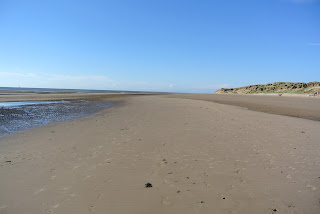 The other day we had a family day in the scorching sunshine to go to CROSBY BEACH where the MERSEY MUD , meets the IRISH SEA SILT. It is actually a lovely bit of beach .....Famed for the ANTHONY GORMLEY cast iron men ,all 100 of them standing naked gazing out to sea.....They were only recently allowed to stay after complaints of nudity and danger from luring people into the soft mud.

The beach stretched off around a headland and i kept thinking of the finale of 'PLANET OF THE APES' ,where CHARLTON HESTON, as the stranded ,so he thought astronaut ,TAYLOR, finds he's not on an alien planet ,but on the remains of the good old planet EARTH, the give away was he tripped over the remains of the STATUE OF LIBERTY...Always a giveaway......I had visions of tripping across the LIVER BIRDS sticking out of the sand......I did my "GODDAMN YOU ALL TO HELL ,YOU BLEW IT UP....ETC ,ETC,!!!"oratorio on my knees in the sand,  But the lovely Lynne wasn't too impressed with my oscar winning performance, just no appreciation of the finer things these women folks, i guess. So we packed up and went for a pint and a steak in a pub ,well i s'pose it makes a change from bananas on 'THE PLANET OF THE APES!' 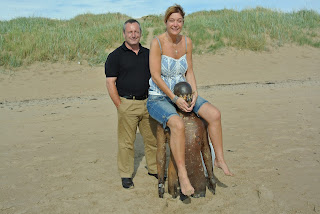 HAPPY BIRTHDAY TO THE LOVELY LYNNE.....EVEN THOUGH SHE'S GETTING ON A BIT ,SHE'S GORGEOUS AND HER SPIT VALVE STILL DOESN'T SQUEAK!!!!! 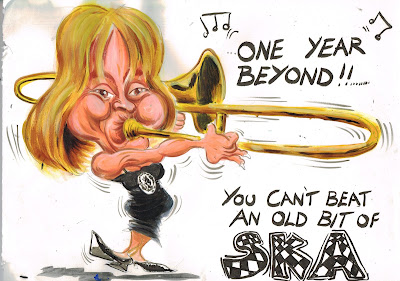 Ah t'was only the other day when the apple of my eye; My reason for living had another birthday.....Bringing her within hailing distance of my advanced years , i'm
!Hrrruuuummmmpppphhhh!!!!",years of age,  Whereas she's a mere "Koff! Koff!, Koff!"years of age!.......So i did her this picture of her in action with her ska band THE MANCHESTER SKA FOUNDATION....Look 'em up on you tube and face book and all those funny sites that we spend what were once precious hours of our days studying what other rubbish others have put up ,so you can reply with some equally inane rubbish ,but theres some good footage of the band and my eternally young missus parping and tooting away ......I would like to point out this isn't a gastric problem due to her age ,its the sound of her trombone, admittedly it can sound like a gastric problem from people of advanced years, esspecially those with a taste for guinness!.....


For years shes played in brass bands ,swing bands ,orchestras and various groups always reading her music ,so people would ring and she could play for them that night, not a bother! For years she refused to believe she could 'play free', but over the last year with a quality bunch of players around her ,she plays and dances and even writes and plays her own solo's.

She loves the SKA music now and is always home from her working days in Birmingham to rehearse on a Thursday. I often go ,but get fed up as i'm at the side having a drink getting knocked all over the place by the nutters who follow the band dancing n' leaping around and there is a fair following and it can get pretty wild ,but Lynne living the rock n roll and ska life loves it, ironically the sweaty effort that goes into her performance actually relaxes her and takes her mind off work and the trials n' tribulations of the daily grind.

Her bones might start creaking ,but her spitvalve on the trombone isn't squeaking yet ,so theres plenty of ska tissue in the old girl yet!
Posted by Tim Leatherbarrow at 16:23 1 comment: Links to this post 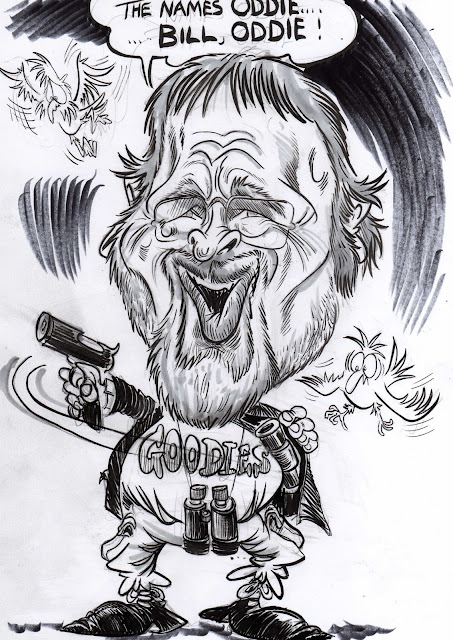 Without doubt though, the greatest ,smoothest ,coolest ,smartest ,suavist ,sexiest ,most ruthless, most dangerous  killing machine and trained assassin ,licensed by her Majesty's goverment 'to kill' ,is ,of course JAMES BOND!

When IAN FLEMING decided to create the most famous secret agent (known all round the world?)....He speciffically broke the cardinal rule about spies having great names and gave the most famous glamourous agent ever the most boring hum drum name he could find. Ian Fleming gave his creation the name of an ORNITHOLOGIST!...A BIRDWATCHER!! ...A TWITCHER!!....We must be thankful as JAMES BOND  could've been the smoothest ,coolest ,most deadly, trained killing machine .....ODDIE ,BILL ODDIE, Licensed to kill !!!!!!

Although Bill Oddie isn't travelling the planet fighting SMERSH or SPECTRE and all those other nasty evil sorts( I'll gloss over 'the women!).....He wanders through the violence and unrestrained danger of the BRITISH COUNTRYSIDE as part of those SPRING/SUMMER/AUTUMN/WINTER WATCH programmes which fill our telly screens for much of the year with MICHEALE STRACHEN looking windswept and ,er ,interesting! surrounded by equally enthusiastic pain in the arse presenters in knitted hats and sweaters ,kagools and those sleeveless khaki jackets full of pockets always bulging ,but nothing ever gets taken out.

They film birds and hairy things that live in holes and swim in streams and eat each other . Its always nice to see some rare THROSTLE THROATED BLUE TIT WARBLER laying its eggs ,sitting on them being filmed for weeks and the same camera filming the otter thats snuck into the nest to savage the freshly hatched chicks the presenters have been "Ooohhing n' Aaahhing !"over for bloody weeks as they watch them hatch and ,beaks open wide feed from their mam n' dad, then "Aaahh!" again as the mam n' dad come back wondering where their 8 or was it 9 'effin' kids 've buggered off to. Wherever they go the countryside is bursting with all kinds of weird n' wonderful and plain nasty forms of furry ,scaley and feathered breeds of wildlife . The endless quest for survival is basically what every creature is working 24/7 to achieve, building nests and warrens ,holes and tunnels and even damming streams ,either for water or they've cracked hydro -electric power.

I walk through local woods and hardly ever see a damn thing. Having said that the place is crawling with squirrels .These are American grey squirrels as they've got rid of the British brown squirrel ,probably enticed away by offers of free silk stockings ,cigarettes and candy bars , see, things never change not even in the natural world.

I did have the shit scared out of me a few months ago ,there was a hugh rustling in some bushes and a fluttering of bloody hugh wings as this massive bird took off ,apparently it was a Heron. With its long neck and long drooping wings i thought it looked like one of those old KLINGON BATTLE CRUISERS from the original STAR TREK, they used to be able to go invisible and drive CAPTAIN KIRK to "Fire Photon Torpedoes ...Maximum spread!"

I did stumble across some wild life ,impressing the females ,with loud swearing ,tatooes and gaily patterned and coloured track suits as they smoked ciggies to impress the others in the herd.  There was also some youngsters in a bit of a frenzy as one had climbed a tree and couldn't get down. "Hey ,Mister can you get me mate down ,pleez?".....So being the upright ,friend to all ,responsibility my middle name ,etc ,i started to climb the tree murmering words of encouragment to the little lad up the tree. The little bastard started screaming and shouting to ,"KEEP THE OLD MAN(?) AWAY FROM ME!".....The little get ,moved up the tree ,so i grabbed him and carried him ,screaming and shouting down to the ground, resisting the urge to kick his scabby arse back up there again ,i turned and with utmost dignity i could muster left the wild untamed woods and the venom of mother nature and  thought i'd watch wildlife on the telly. 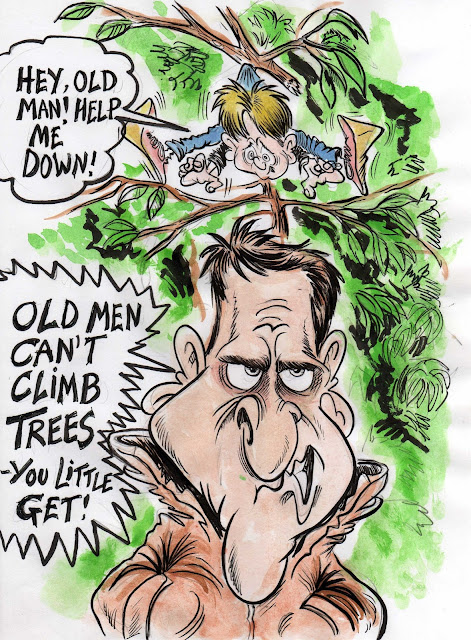 Posted by Tim Leatherbarrow at 15:44 No comments: Links to this post

THE WHO HAD THE LIVER BIRDS ROCKING TO QUADROPHENIA ON THE BANKS OF THE 'MERSEY MUD'!!!!!! 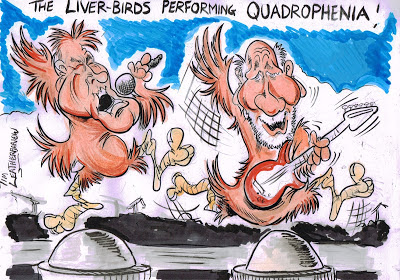 On Saturday night came home to a very 'Ho-Hum' ROLLING STONES'Glastonbury gig ,but the following night we went to see the big boys do it properly. THE WHO  were in the fair city of LIVERPOOL. The ECHO ARENA was 'chokka' and the noise was deafening and we had seats only 20 rows back from ROGER DALTREY. The show was even better than last week at MANCHESTER.. QUADROPHEN'YA has evolved into a real live piece after years of trying to get it on the stage to be performed properly ,well they've 'cracked it!'.....The place went mad.

Only problem is ,being a short arse i seem to attract all the concert knobheads who have to jump about wave arms, phones and holler and scream at every f**kin' word ,sung or said and insist in telling their mates 'how great this or that bit is'....I was stuck beside some girl who was annoyed as i hadn't given her enough room to dance, so in between dissappearing to the bar or the bogs she got her fellah ,this fat big getto have a word , ,i lost me temper and 'The dreaded Leatherbarrow finger came out'....As i politely explained to him how..."I'd paid 70 f**kin' quid to watch them ,not to argue over the 5 inches that i'd been pushed into 'his space' by the crowd , and would he F**K OFF!!!"It seemed to do the job and he shut his gob. But talking after ,everybody seemed to have their own pet knobhead to drive them nuts!


Posted by Tim Leatherbarrow at 15:36 No comments: Links to this post