IT'S NOT WHAT YOU DO AT THE GYMN ITS GETTING THERE THAT FxxKS YOU UP! 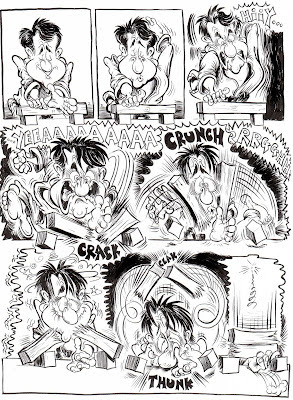 Through the years as i've been forging the body in the white hot furnace of my will into the steel hard fighting machine that you all know and love i've discovered its not the training thats so hard and punishing ,that can be handled and even enjoyed. The one thing that never gets easier ,infact seems to be getting harder is the getting off my arse to make an effort to go training. I just recently thought i'm going to make an effort to make life a bit more productive on a variety of levels. I am going to produce more work :Keep this bloody blog up to a semblance of some kind of regularity and even hilarity; And most ridiculous of all try going to the gymn! Well, we've got a family membership so i might as well try some of the classes and even do my own karate training inthe empty halls, brilliant i'll be a rippling muscular ball of kinetic energy before you know it. So, much to mine and 'The lovely Lynnes suprise i went to the gymn a couple of times this week. The toughest part of the whole stupid ridiculous process is the actual getting there its about 50 minutes walk there then back , thats the killer ,then i get in and before i flake out or put the kettle on i turn right around and take the dog for a walk.
But its not all in vain, i'm fit (now all together now...) "I'M FIT FER FxxK ALL!!!"
Posted by Tim Leatherbarrow at 16:13 3 comments: Links to this post 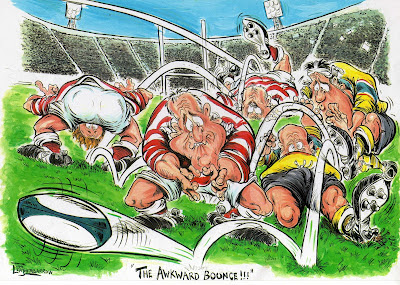 Over the last couple of days or week or so nearly two, even i have been freezing me cobblers off in the fine state of Wisconsin in the good ol' U.S.A.of America. Accompanying my hairy mate Guy Carter. It wasnt a holiday as Guy had personal business too see to so i had a lot of hanging around in cafes and suprisingly found myself in the odd pub or 46. Guts were gurgling as i existed on a diet not quite, but almost exclusively of Buffalo wings ,there i betcha didnt know buffaloes had wings did yer?...And this gastronomic aerodynamical mouth burning fest was washed down with good ol' American lager ,mainly. Every bar had telly's all over the show and every single one had sports on. Basketball seemed to be the favourite, and it seemed to be on for more hours than there was in the day. I know i'm not American as i cannot stand Basketball, unlike American football and Baseball which i just dont understand ,except that Baseball is a souped up schoolgirl s version of rounders.....Thats why the 'special relationship' is a heap of shit as the yanks do not like to be reminded of this slight observation into their national sport and any decent Englishman couldnt resist pointing out that an all-American hero ,like Babe Ruth , plays a game beloved of schoolgirls in the playground.
The basketball players ,all big blokes ,except for the manager who is white ,3 feet tall fat with grey hair in a suit shouting constantly as his team pound up n' down the court. Scores ,in the hundreds are not uncommon 187 to 188, for 'instance, ah well ,no accounting for taste i s'pose.
To be fair on the Americans i didnt see hardly any news coverage ,unlike our beloved land ,every day is a constant basketball like feed of gobshite politicians and reports on the economy, etc ,etc, blah, blachh!....They flood the screen with sports. I'm no sports nut ,but i know which i prefer, this was confirmed when the news came on when i got home.
When i did get home ,uncharectrisstically the telly was full to the gunnells of bouncing balls, but not the perfect bouncing American basketball types , but the good ol British ,or 6 nations type rugby ball bouncing here, there, hither n' thither. Players beating the living daylights out of each other and not a pad or crash helmet in sight. Arrived to see this nasty Welsh chap catch a untypical straight bounce to score a try ,then a sloppy bounce which disgracefully according to ,apparently a WELSHMAN viewing the moniters didnt go over the line, so Englands last second try was dissallowed and Wales won the Triple Crown for the first time since the dinosaurs walked the Earth or sometime ,much to my disgust, but the joy of the beloved Lynne, the missus ,gawd bless 'er welsh cotton drawers.
Posted by Tim Leatherbarrow at 15:45 No comments: Links to this post

I GUESS I BOMBED PAINTING A BOMBER! 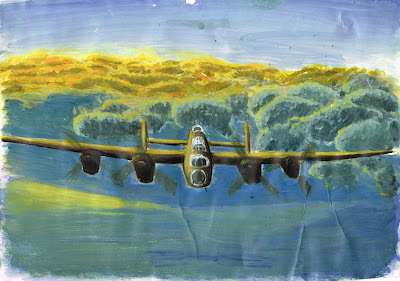 Just this morning as i lay on the floor scratching my plums with one hand and holding a gallon mug of heavily sugared tea in the other and watching telly as well.....And they'll tell you its only the women who can multi-task! I was watching a documentary called 'BOMBER BOYS' about the LANCASTERS of Bomber command during the second 'Big One'. I remember as a little snotty kid being absolutly spellbound and awestruck and amazed ,theres a whole heap of similar words and they all apply to my feeling as those ROLLS ROYCE MERLIN ENGINES of that massive LANCASTER BOMBER thundered over my head and i have loved that aircraft ever since. There was a sequence on the programme were the last flying Lancaster was flying over the English countryside and my daughtr looked up from her book in amazement and disgust as her dad watched this airplane .......in tears!!!......."My dad crying over an airplane???"......The kid has no soul.
The Lancaster was designed by a Mr Chadwick from Widnes, just up the road from where i spent a good chunk of my life. And not only did he design the Lancaster ,but the other plane that affected me in the same way as it once swooped over my scruffy young head was the amazingly beooootiful AVRO VULCAN BOMBER, you remember from JAMES BOND ,THUNDERBALL ,the delta wing. The original design was by the same Mr Chadwick ,do you know i think i would've liked Mr Chadwick.
The painting was a first attempt at using acrylic paints and trying a proper painting....I dug it out this morning and ,suprise suprise it was a lot worse than i remembered, I bombed painting a bomber, yes i know the jokes as bad as the painting ,but i've only had one gallon of tea this morning what do you expect?
Posted by Tim Leatherbarrow at 13:14 5 comments: Links to this post 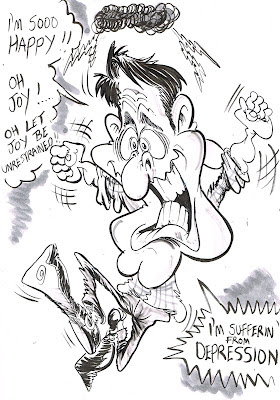 I wasn't very well last week and was crashed out on the couch not only physically 'shagged out', but mentally f****'d up too. I couldnt shake off this 'pissed offedness feeling' and lay there feeling thouroughly depressed. "Hang on " thought i, "I'm depressed! But only millionaire musicians and movie stars and celebrities who have absolutly nothing to be depressed about get depression..."I mean depression is a sort of qualification to be a real celebrity or creative genius ,virtually every comic genius your Spike Milligans ,etc suffered from depression. I definitly dont have a lot of money and these days i'm not known much outside my rapidly reducing social circle, but i'm depressed so maybe i'm a creative genius. I always had suspicions, but if i've got depression ,thats my official qualification for being a creative genius. I'm in quite august company. I'm depressed ,oh let joy be unrestrained.
Posted by Tim Leatherbarrow at 13:46 7 comments: Links to this post