JORDAN BOOBED AND GOT HER TWO BIGGEST BOOBS MIXED UP! 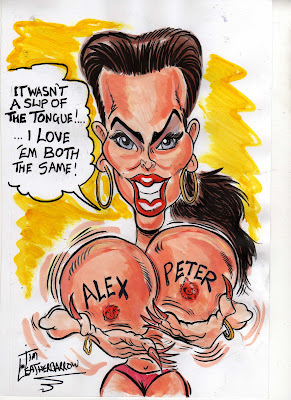 The other week i was walking the dog through some local woods and espied not one, but two Asda trolleys stood side by side amongst the undergrowth and thought isnt nature wonderful now spring is sprung, shook my head and wandered off. When i got in to the house ,i put the kettle on and the telly, just to help me plug into whats going on in the world, you understand....Not to catch up on my Sky+ recordings, obviously ,'cos thats what you were thinking wasn't it. Hope your ashamed of yourself, judging people by your own low standards. But as soon as the picture appeared there was something about JORDAN/KATIE PRICE, now theres a suprise thought i. Apparently she was talking husbands and out of the two boobs she's been married to ,she got the names mixed up and was talking about her 'ex'PETER ANDRE, rather than the present cage fighting /Holloaks(?) acting new Mr Jordan: ALEX REID. So, obviously this was the big news beamed to all four corners of the globe. Again i found myself shaking my head...I'll get the hang of life ,one day, i s'pose.
I had a look up (phnaar, phnaar) of Katie Price on the computer and read about this silly cow who is, well everywhere and with everyone and every ,every that the ultimate' chav',can get involved in and squeeze as much publicity out of Thats not my description, by the way ,before cage fighters start kicking the door in. She was born in '78 ,so she's about 30 and she's had 3 autobiographies published. Jeez! i'm (aaaaagh!) 50, this year and i'm not sure i could fill one. Her private(?) life has been documented and filmed before, during and after her marriages .She'll appear at the flipping of a coin. Now shes writing, with ghost writers ,novels and childrens books. But ,apparently she has been refused addmission to some high class events ,such as CARTIER- sponsored Royal polo tournament, as "she's not the type of person we'd like attending our functions". The Queen goes n' she gets in(?).....Funny that!.. Couts bank refused her, even though she had the money reqired for them to let you in. Whatever she is ,or does ,she has about FORTY MILLION POUNDS !!!!....for doing it. Good luck to you, girl ....I'm shaking my head again.
She travels the world to get her nails done and hair extensions put in. I saw a picture the other day and she is a big busty girl . And this is after shes had her boob job reversed and made smaller as she was worried they'd start to droop after the birth of her kids.....My god!, if they did start to droop ,she'd need to wheel them around in an Asda shopping trolley, or two, one for each. Those two in the woods ?..Nah they couldnt be, I've not seen her mentioned in the WARRINGTON GUARDIAN......The heads shaking again!
Posted by Tim Leatherbarrow at 16:28 10 comments: Links to this post 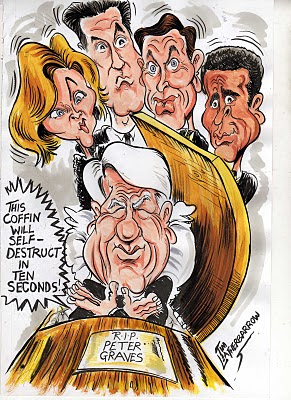 Well they can give him all the time they want before 'this message self destructs', as Jim Phelps the fearless leader of the IMPOSSIBLE MISSION FORCE(IMF), or that lot from MISSION IMPOSSIBLE, that great ol' series from the sixties. Jim was played by craggy faced twinkly eyed Peter Graves. Sadly, aptly named considering he recently'popped his clogs' and died. Any more missions, unless they invole clouds, harps n' halos will prove bloody impossible. Or as they say in good ol' Scouseland "Dead impossible,mate".
Ah well another link to my formative years snaps. It was a great old show and everybody remembers the music and the explosive fuse fizzing away as the way over the top, but wonderful opening credit sequence ran. Then Jim would turn up in the middle of nowhere in a kids toy warehouse on a merry go-round; A ladies toilet on an oil rig: A shed on an allottment in the middle of the artic circle,or someplace as equally obvious to recieve secret instructions. He then had to listen to a tape message that would tell him about some general or scientist from behind the 'iron curtain', always from countries that ended with'DAVIA'. Then the voice would tell him they were in deep shit if they were caught as nobody was going to admit to knowing anything about anything. They'd wish him 'good luck' and inform him the tape was going to blow up in his face in ten seconds....Its a great life being a secret agent. 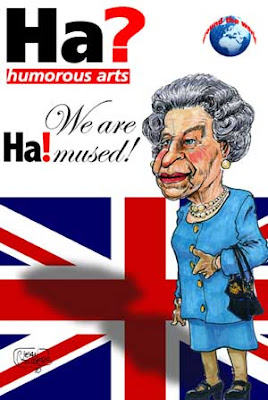 The cartoon was featured in HA magazine, just click the link to the side and you'll be whisked away.

Posted by Tim Leatherbarrow at 16:27 No comments: Links to this post

CARTOONISTS AND POP STARS ARE SEX SYMBOLS,MARK OWEN FROM TAKE THAT,TOOK LOTS OF 'THAT',I'D LIKE TO TAKE SOME OF 'THAT' TO,BUT THE MISSUS WONT LET ME! 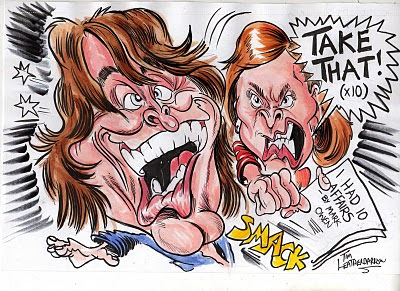 Aaah after years of gallavanting around the world posturing and performing in front of thousands of screaming adoring gurls....It has come as an astounding shock to one n' all that the saintly Mark Owen, the 'nice guy' from 'Take That' has been a little too nice a little too often and took that what the adoring hormone riddled screaming gurls had to offer. Funnily enough his missus wasn't as understanding as myself and other such 'men(ok and gurls,chiz chiz) of the world'. This is possibly due to the fact being a cartoonist and caricaturist ,once of great renown, i would travel around weilding my brushpen to the adoring public. Admittedly i didnt have quite the response that maybe 'Take That' hitting town or a Boyzown, or whatever ,but a few kids seemed quite taken with me. Nah, i could've had my pick,gurls would gaze adoringly, i think, at the top of my head as i peered intently at the fine precise ink lines on the paper, then occassionally glancing up to see if her eyelids were the same size, if her ears were level, if she had a full set of teeth and how far down her top chin did her bottom lip droop. Important things for a caricaturist.Romance could've bloomed n' blossomed many many times but for the queues of people i had to bloody draw before i could lay the irresistable Leatherbarrow charm on anyone. By the time i'd got the chance there was only me and a curled up ham sandwich on a crumb riddled plate on one of the empty tables, if i was lucky, before my long lonely five hour drive through the night. But i'm having a quiet time of it these days. So i thought i'd ask the Lovely Lynne if it was ok for me to have ten affairs, as she's out a lot of the time and it'd be nice to have an outside interest. Much to my suprise she seemed quite keen, until i realised she thought i'd said something about me buying her some 'Furs'. She thought they'd look quite smart when she has to go to these banking 'do's', or if she's playing with her band at various 'gigs'. But when she realised her mistake she wasn't so accomodating. Why would i want to have torrid affairs when we've had SKY+ fitted? So my cartoonist sex appeal is laying unused, gathering dust. The last time it was put to good use, just to show you how uncontrollable i was, it was with the Lovely Lynne. I was working at her bank and she fell madly in love with me and married me...It's a dangerous thing this sex appeal.

Posted by Tim Leatherbarrow at 13:38 2 comments: Links to this post

TRAVEL MAY NOT BROADEN THE MIND ,BUT IT BROADENS THE HIPS! 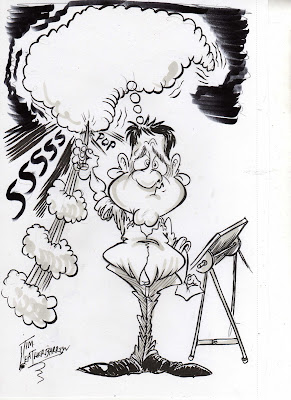 Having just returned from a more than well deserved holiday across the Atlantic pond in the wild untamed themeparks of Orlando.Stuffing our faces at a variety of help yourself buffet restaurants and having a lot to drink in everywhere else. In lovely sunny Florida, i caught a cold after getting soaked by that killer whale and the girl he killed a few days later. This drama and adrenaline pumping ride-fest(after 2 hour queues) was followed by a week on a cruise around a bit of the Carribean on a 30-storey, 5 mile long luxury cruise ship. The boats are made that size to accomodate the people who go on cruises(of which we aren't). Very large ungainly ,definitley not streamlined, like the boat ,take time to get' up to speed' and have trouble coming to a stop. So the passageways above and below decks are constantly filled with very strange shaped older people shuffling along. You have to be in possession of swivel hips and boxers feet to avoid collisions. But with the stop offs on various tropical isles and copious amounts to eat n' drink i can think of worse ways to pass my time. Only the other day my beloved 'lovely Lynne'treated me to a breakfast in Asda. (There! I told you she loved me.) There you are one morning on the sunny deck off the coast of Honduras having a luxury gut busting fruit n' pancake breakfast. One week later your choosing what greasy fried combination you want slapped onto your plate in the cafe in Asda ,Warrington.
Once back i have found it damn near impossible to get back to writing this rubbish. Stop clapping and cheering, i'm a sensitive soul you vicious bastards. The brain and the imagination just would not function, absolutly nothing was there to light the blue touch paper of the imagination.And they say travel broadens the mind ? The food and drink might have broadened the hips as the Lovely Lynne keeps complaining. I suppose its just as well i dont write travel books, Bill Brysons got nothing to worry about for a while anyhow. I'll sit and gaze out of the window and see what flotsam and jetsam drifts into the vacumn of my imagination. A total void cannot exist as is proven by the theory of the 'big bang ' suddenly appearing out of nowhere. Maybe i'll have an imaginary' big bang'.......(Ooooh' err, missus!)....Sigh.....only in my imagination!!!

Posted by Tim Leatherbarrow at 12:58 3 comments: Links to this post