PRISON OVERCROWDING SOLVED...LOCK THE CLAUSTROPHOBICS INSIDE AND THE AGROPHOBICS OUTSIDE! 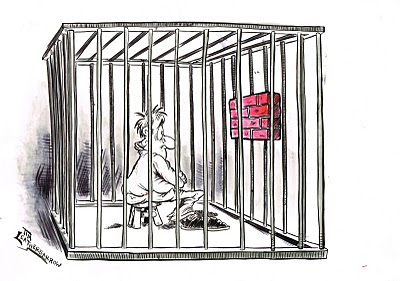 As we hear on a daily basis terrible stories about how the poor badly done to guys n gals swelling our prison system are up to 15 a bunk or something and still new batches of offensive offenders come flooding through the portals to all her majesty's holiday camps. As tax payers it affects us all. From the upkeep of cells to the upkeep of prisoners, to paying for the tablets of soap left on the shower floors????....

But ,as ever i'm here to help solve the problems that no one else can solve. I might have the wrong end of the wardens cosh, but i was lead to believe that prison was a punishment and as all good punishments afford a certain degree of suffering for those being punished. So to make it all the more miserable for all involved and make more room to help spread more misery to all the extra offenders able to be crammed into our splitting at the seams prison service.

There our lots of psychological fears , or PHOBIAS as the psychiatrists call 'em. There are an amazing amount of phobias with amazing names for everything, but they end in Phobia. The main ones are CLAUSTERPHOBIA, fear of confined spaces......Simple cram all them into cells inside the prison.

AGROPHOBICS...Fear of open spaces ,simple put them outside by themselves, as ably illustrated by yours truly.

Theres also a famous phobia ,a fear of heights, whose name escapes me for the moment and with this crappy computer i couldnt be arsed trying to find out on Google. I'd only returned to find all this hard written crap had dissapeared , so you look it up on Google ,anyhow i'm not meant to know everything .Ok nearly everything, but theres limits. But back to fear of heights, stick them sufferers on the higher floors, to compound the suffering , put them on the upper bunks.
Posted by Tim Leatherbarrow at 18:00 6 comments: Links to this post 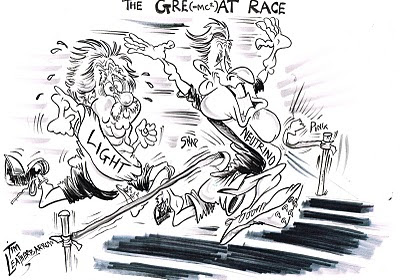 Everybody knows and loves ALBERT EINSTEIN, even people who cant count the thumbs on one hand for some reason know his SPECIAL THEORY OF RELATIVETY equation the infamous E=MC2, even if they havent got a clue as to what the hell it means and to be fair they wouldnt be the only ones. But basically it sums up the laws of the universe ,space, time ,and a few other odds n' sods that keep the cogs in the machine turning and squeaking. He's everybodies idea of 'The mad scientist ', Amass of unkempt white hair ,glasses on the end of his boozers nose and an old fashioned bent pipe pumping out clouds of smoke. He sat there and just thought and imagined what it would be like to travel on a beam of light . His imagination took him across space and time and opened these theories to him it was only later when he had to get the numbers to agree.

His basic law ,NOTHING CAN TRAVEL FASTER THAN LIGHT IN A VACUMN. This is the lynchpin on which every scientific theory and idea is based. And quite simply cannot be broken, up until last week that is.

In the DEAD BIG HADRON COLLIDER, or whatever size they call it they produced cute little subatomic particles called NEUTRINO'S which can travel through anything ,so they shot them through the earth from Switzerland to Italy and they arrived a billion zillionth of a megasecond ahead of time ,beating the speed of light.

Quel horrers!!!!!! ..As foreign scientists probably say ,in one billionth, zillionth of a megasecond the universe has been turned arse over tit . It even opens the way for time travel. Some wit cracked a funny ....

...........The barman said"we dont sell beer to neutrino's!" A Neutrino walks into this bar and asks for a beer....(geddit?)..... If they can beat time in the drag race, The law of Causality is broken , which means quite simply 'The cause happens before the effect!' Unless light can regain its title. If not you could read this before i've written it. So if you dont like it let me know , save me wasting my time.

There is questions about the accuracy of the timing and distances involved to measure these billion ,zillionths of megaseconds. If they want to get it spot on, get JEREMY CLARKSON, CAPTAIN SLOW and THE HAMSTER, from TOP GEAR with their trusty stop watch to measure the speed and time round the top gear track. In fact THE STIG can road test the LIGHT PHOTON and THE NEUTRINO, that should solve the problems.
Posted by Tim Leatherbarrow at 15:17 2 comments: Links to this post

IS ALL THE LIFE IN OUR RIVERS AND STREAMS 'COS OF CLEAN WATER OR 'COS THEY'RE USED TO THE SHIT? 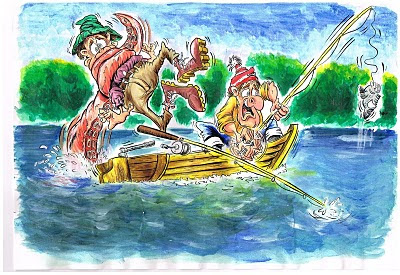 As you go through life you take things for granted...One of those things was , ever since i was young was how rivers and streams were dirty and you should never drink the water, etc, (where would we be without out mummies, eh?).. The simple fact was all those factories pouring out smoke ,smells and chemicals were filling the nearby water supplies with nothing but 'pure shit'. The fair city of LIVERPOOLS, own shit filled tributary THE RIVER MERSEY was legendary amongst shit filled rivers. Upstream we had the fair villages of WIDNES,WARRINGTON,RUNCORN,ETC....All plied high with factories with chimneys pumping shit into the skies and a little more descreetly pipes pumping all kinds of crap into the once crystal waters. All this was washed out into the Irish Sea to meet up with all the shit pumping out of DUBLIN BAY,there was a patch of sea water that the mere thought of is enough to put anyone off ,never mind their dinner ,but eating for life.

Then for some reason it was said that the rivers were becomming cleaner. The whole of the country laughed, never mind all of Liverpool when it was announced the Mersey was getting cleaner. Everyone whose ever sat on a MERSEY FERRY has been astounded at the junk and crap floating on the waters. I used to be very embarressed and jealous at the number of condoms floating about ,it meant most of Liverpool, Birkenhead and all points up stream were having a lot better time of it then i bloody was. Some of them condoms probably still had the wearer connected to them ,judging by the fair number of bodies that were pulled from the murky depths, and probably still are!

There came a time when people started doing ridiculous things like canoeing and wind surfing on the Mersey. "My god! They must be nutters!" going anywhere near the water of the Mersey. Then time passed and people swam in it, and survived?

So now Otters and all kind of creatures and fish are supposedly filling our streams and waterways, is this because the waters cleaner or because they are more resiliant to the quantities of shit?.....And did you know the water in rivers is see-thru?...I'm yet to be convinced about the Mersey, tho'. I notice DAVID WALLIAMS only swam a hundred miles or so along the THAMES, a little gut and bowel trouble aside ,thats easy ,lets see if he can handle 5 miles of the River Mersey.
Posted by Tim Leatherbarrow at 13:00 No comments: Links to this post 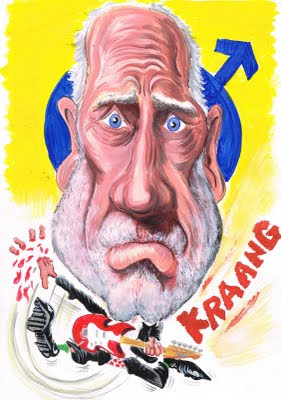 Gawd bless the BEEB say i, They ran a couple of documentaries over the last two weeks by and about the amazing PETE TOWNSHEND. Something along the lines of GROWING OLD BEFORE I DIE'. As some of my readers will be stunned and amazed to find out ol 'pete' is one of my absolute heroes. It was good to listen to the man telling his astounding story ,but enjoying himself and making it funny and entertaining. But for me the other vitally important aspect of the shows is its an excuse to bung another Pete Townshend caricature on the blog. If highly august caricaturing genius's like SEBASTIAN KRUGER can get away with banging out loads of caricatures of his heroes THE ROLLING STONES, then i, who doesn't sadly deserve to breath the same air as Sebastian, can whack out a few PETE TOWNSHEND and THE WHO piccies . Another eason is that the STONES and THE WHO were possibly the ugliest bands in the world and so are so much fun to draw.

Not only have the BEEB done a documentary about Townshend, but last Tuesday they did one about a certain KEITH MOON....."I'M KEITH MOON ,WOTS YOUR EXCUSE?" I havent had a listen yet ,but i shall and if i can get my arse into gear may even have a drawing of the 'LOON'(r.i.p).
Posted by Tim Leatherbarrow at 16:26 2 comments: Links to this post