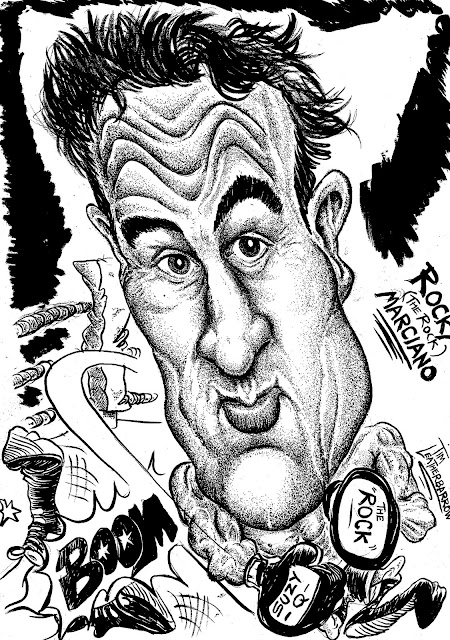 ROCY MARCIANO.....THE ROCK....THE ROCK FROM BROXTON.......THE BROXTON BLOCKBUSTER......And a variety of names to do with 'rocks' and blocks' will give you a rough idea of the sort of fighter ROCKY MARCIANO was!

He was MURDER!....A short arsed little bit of murder with limited reach ,but i have to admit  i don't think i'd like to have shared that tiny little roped in square ring. He wanted to be a baseball player, but didn't make the grade for reasons Americans'd understand, but us Brits who couldn't imagine ROCKY MARCIANO playing that English of all schoolgirls games couldn't..ROUNDERS!....(Now that really pisses off our cuzn's from across the pond). Rocky joined the army and started boxing to avoid having to work in the kitchens. The Welsh'll be glad to know he was stationed in.....SWANSEA..?...Loading stuff for Normandy.

When our hero returned home he started as an amateur and later turned proffessional. His first 16 fights were KO's before the 5th round and 9 before the end of the 1st. Thats not bad for somebody considered too short ,light and lacking in reach. He was also described as 'crude,wild, swinging, awkward and missing heavily...Nat Fleicher once editot of 'THE RING' said  2/3 of the 50-odd punches he swung against ARCHIE MOORE against the ropes missed! His right hand became infamous as 'SUZIE-Q!' and took down some mean opposition.ARCHIE MOORE ; EZZARD CHARLES ; JERSEY JOE WALCOTT and a slightly aging but great JOE LOUIS, whom Rocky beat and cried in LOUIS'S changing room after the fight as JOE LOUIS was always his great hero , (they say never meet your hero...Never mind knock 'em out of the ring!), .....The rock was a softee! The SUZIE -Q Rocky's right hand bomb was tested and that right punch had the equivalent force of an armour piercing bullet , or the force required to spot lift 1000lbs, that would spoil your day i'd imagine. It helped him win every fight 49 wins ,43 KO's and none of those losses or draws. He's the only fighter to never be defeated and retired at 31 and stayed retired.

'They', those people that do strange things like that did that!...That being ...Arranging a computer simulation of MUHAMMAD ALI v ROCKY MARCIANO...
They took sparring footage of both and joined them together ,apparently ALI won. MARCIANO said in a line worthy of ALI when asked about the result.."I'd be conceited if i said i'd won, but i'd be lying if i said i'd lost!"

A great fighter , the public always loved the scrappers, sluggers whatever you want to call them, but hard as he was everyone loved 'THE ROCK!'
Posted by Tim Leatherbarrow at 17:36 3 comments: Links to this post

DOMINIQUE VALERA: THE KING/THE CAT....ONE FRENCH FIGHTER YOU WOULDN'T WANT A PUNCH OR A KICK DANS LA GOB FROM !!!!! 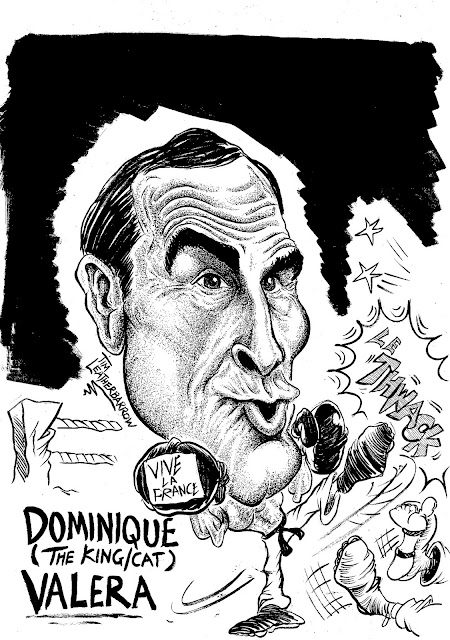 When i were 'nobbut a lad' and discovered the martial arts ,originally through a few cheap photocopied sheets stapled together on even cheaper paper, i still thought it was great stuff. Then the great man himself came along...SENSEI TERRY O'NEILL....With his bible for all martial artists FIGHTING ARTS MAGAZINE(For the serious martial artist!....Not me , but i read it)...In the early days of the 70's when the legends of Karate were fighting for the national squad and mainly from LIVERPOOL..;THE RED TRIANGLE; KIRKDALE,etc,etc. Glory days indeed. They lasted for years ,but the greats ;O'neill, Sherry, Higgins ,Brennan, and on are still remembered with awe. I'd've loved to train at THE RED TRIANGLE, but never built up the courage to go and have the shit kicked outta me by the experts. I came close and had some great years training with the boss hisself TERRY O'NEILL....He worked the doors around the fair city of LIVERPOOL for donkeys years and was a legend. People say "Aw you cant do all that BRUCE LEE spinning back kick shit in a real fight!", But Terry could and did. The A merican magazine BLACK BELT named him the deadliest fighter in the world or something along those fairly impressive lines ,remember this is the yanks talking about a limey!.... Look out for a book called 'WORKING WITH WARRIORS' written by a good buddy of O'NEILLS, DENNIS MARTIN. That's got some good stories . TERRY O'NEILL was a stupendous competiiton fighter as well, inovative and spectacular and still talked about years after injury put an end to his competition side.

Another name from them faroff days of FIGHTING ARTS was a contoversial french bloke by the name of DOMINIQUE VALERA. He is a French fighter and through the late 60's and 70's he cut a swathe through anybody daft enough to stand against him. He was nicknamed 'THE CAT' or 'THE KING'...His movements and style were apparently very smooth and distinctive. The American BLACK BELT MAGAZINE named him top fighter on numerous occassions. VALERA'S  moment of infamy came during the World Championships in Long Beach, California. During a fight VALERA felt a decision was unfair and smacked one of the judges and was banned from competing in international KARATE tournaments ,ever again!....VALERA stayed in AMERICA for a while and met and eventually befriended a U.S. FULL-CONTACT/KICKBOXER, by the name of BILL(Superfoot) WALLACE. He is a living legend and has never been beaten for most of his career, which is suprising as he only uses one foot and mainly one hand. His right leg was turned to mush in a judo fall and, i think he wears a brace on it, but he trained his left leg and  it tops speeds people just can't imagine, if you find him on YOU-TUBE you'll see this leg and foot lashing out like a bullwhip or a snake strike it is astounding. Other fighters know exactly what they're going to get, but can't do anything about it. Valera trained with WALLACE and joined the ranks of the proffessional AMERICAN KICKBOXING or one of various names it was known by ,but it had a huge following. Apparently our French hero did quite well before returning home to promote full contact training around France, look him up on the internet as he combines the loose fighting style with traditional Karate self defence.

I'm still working on a TERRY O'NEILL caricature so i'll bung it on here whenever i manage to complete it , i'm not going to upset any of these guys for you lot!
Posted by Tim Leatherbarrow at 14:47 1 comment: Links to this post

GARDENING , THE CURSE OF MAN....GETTING OFF HIS ARSE TO MAKE OLD MOTHER NATURE LOOK GOOD!

Whenever the rain and thunderstorms ease off slightly ; The snow and frost melt and you can see your hand ahead of you in the blizzard.......When theres a 15 foot gap in the bulbous grey, grotty  cloud drifting menacingly 10 feet above the roof of your house, a gap able to allow a few cosmic rays and about half a dozen photons of sunlight through to reach the sodden ground below, this illicites an amazing response from the ladies of the houses.....It's summer and its time to do the gardening!!!!!.......We are dragged kicking and screaming out towards the garage door and thrown into the musty darkness to dig around for shovels, lawnmowers, strimmers and other items of gardenning paraphenalia that you had almost forgotten existed and wished to god would cease to exist yet again. Its time to make your little garden of Eden beautiful again(?) ,do your best for your little lump of OLD MOTHER NATURES  wonderfulness that occupies a little square in front and back of the house, its only a little bit, but why can't MOTHER NATURE  keep it looking good, why do i get dragged out to make her look good?

Posted by Tim Leatherbarrow at 17:42 11 comments: Links to this post