...NOT THE CHAINGANG!.....WORKING ON MY BOOK ABOUT MY 3 WEEKS HOLIDAY IN JAIL,DARLING! 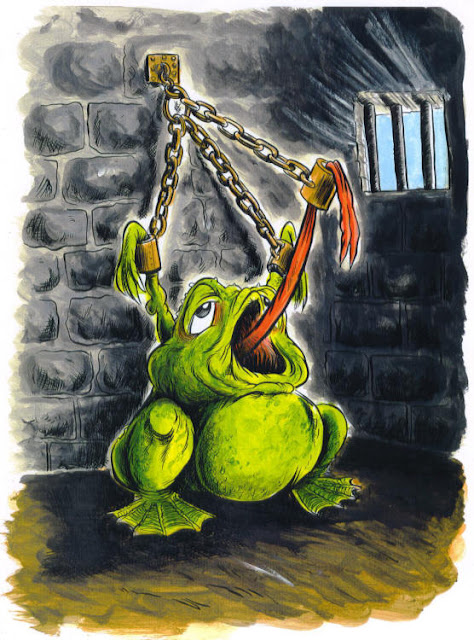 Through the years we've seen on films how prisoners have had to suffer in various ways in jails through history from chained in dungeons and branded with branding irons ;working on chain gangs, wearing canvas sacking uniforms with arrows on. Punished, whipped ,flogged ,slung into 'solitary' ;roasted and frozen in the 'box' ,a favourite of film makers ,where the corrugated iron box is molten hot during the day and freezing cold at night....That was in a lot of cowboy films ,infact the other day watching an old 'KUNG FU' episode KWAI CHANG CAINE and another bloke are slung into one as way of punishment. The mere mortal normal 'con' is dying between shivering his tits off and sweating his cobblers off, whilst CAINE sits serene ,calm and placid feeling neither heat nor cold. Sure enough the ignorant mere mortal wants to know "What kind o' man are you ,Caine?".....To which he gets the Caine reply whispered ..."I am just a man!".....But he explains that to survive he must make contact with his soul....?.....There y'go ,simple! Now you need never wear coat, scarve n' gloves again when its miserable and cold, or strip in the sun when its not. So easy as that the fellah crosses his legs in the lotus position like Caine and days later emerges much to the guards amazement as 'fresh as a daisy!'...All very well, but how did he manage the lotus position ,just like that ? I can get my head around surviving the temperature extremes ,but for a new boy to sitting cross legged in a box for days ,how he's not crippled for life is beyond me.

Prisoners beaten ,whipped on the chaingang, (PAPILLON ,,,COOL HAND LUKE, etc)....Then the glamour of those far off prison islands and such is replaced by our much more less dusty sunny, less glamourous, far sighted prison reforms , tiles and bars ,the pot in the corner and the smell of boiled cabbage pervading the old victorian buildings. New concrete buildings are built and prisioner numbers go up and more time in cells,prisioners must be kept happy, tellys ,phones ,gyms, etc are supposed to be the prisioners lot these days. I don't know ,but i do know i don't have any sympathy for anyone who breaks the law ,the laws the law ,okay ,you might not agree, but thats it ,you break it you get punished. The other day our next door neighbours got broken into and thescumbag sweethearts turned the whole house over, far as i'm concerned theres no excuse and 10 minutes with a baseball bat around their heads should be given to my neighbour.

I've tried to explain to my disgusted daughter ,angry at rules at school about uniforms and hair colours etc, that the rules are there and if she breaks them she'll be punished ,she's on about writing to the European Court of Human Rights about not being able to dye her hair some purpley brown colour.

The other day that slimey, lying scheming MP was released after serving a fraction of his sentance for getting his wife to take the blame for a speeding offence. Apparently the prison is in a lovely part of the world and the prisoners lock themselves in at night ,if they want ,or they can amble down to the village, apparently after this few weeks of hell he's going to write a book about his ordeal ,as is his wife ,who was in a similar 'holiday camp'.....Can't imagine a PAPPILON type novel , definitly not a STEVE McQUEEN or PAUL NEWMAN film in there!
Posted by Tim Leatherbarrow at 12:47

The only hurdle to accessing this is of course human limitations and the fact that the brain does not function solely as a
learning tool for the human being. Local country clubs are
offering trivia fun for as little as forty dollars per couple.

The buccal cavity is a small cavity that has neither jaws nor teeth.

Hello! I simply would like to give you a big thumbs up for the great info you have got here on this post.
I am coming back to your website for more soon.

Thiѕ iѕ very inteгеsting, You're a very skilled blogger. I have joined your feed and look forward to seeking more of your great post. Also, I'ѵe shaгеd your ωeb site in my soсiаl nеtwoгks!