WHEN ME MAM SAW ME GUZZLING GUINNESS DRAWING CARICATURES SHE KNEW I WAS A PROFFESSIONAL CARTOONIST! 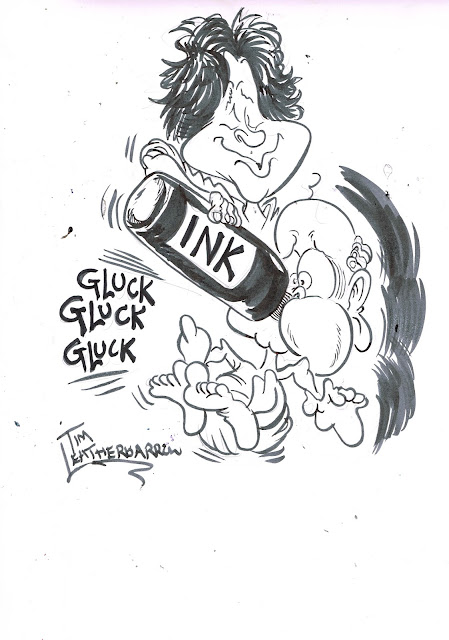 What did my ol' mam do to encourage my  slide from grace into the dark dingy world of the cartoonist?.....In the beginning ,quite frankly ,not a lot !

My dad was the fellah. He used to be a graphic artist in the days when adverts were ink drawings and he was superb with ink . As an artist he was great , a damn site better than i ever grew to be . In his days in some intelligence unit in the RAF after the war he travelled all around Western and Eastern Europe and had beautiful ink drawings of buildings and churches and cathedrals which he gave to a thouroughly unimpressed young son.

I remember he arranged for comics to be delivered to the house in the days of paper boys in the 60's and on a Tuesday evenin ,i was breathless with excitment waiting for the VALIENT, the LION, and esspecially the TV21 to thud to the mat along with the good old LIVERPOOL ECHO. Then one day he came home with a big bundle ...Only 4 years supply of the VICTOR comic, spent the next couple of weeks lying on my belly on the floor transfixed with the 'TOUGH OF THE TRACK'; 'BRADDOCK OF THE BOMBERS'; KILLER KENNEDY'....And on it went, jeez!..I was a 'pig in shite!'...Some of his co-workers in FORDS heard about the comic mad son and gave me dad bundles of comics ,ah happy days. I think my mum liked it as i was the quietest she'd ever known me to be .

I discovered the cartoonist RIGBY  in the SUN newspaper with his hidden little boy and bird in every drawing , dad'd help me to find them ,he helped me put a RIGBY scrapbook together. BILL TIDY used to draw the weeks news on GRANADA REPORTS  on a Friday teatime, me n' dad loved it as he zoomed through his drawings as he talked through the events of the week in minutes flat . Thats when i went from drawing spitfires and Lancasters as well as spaceships to silly squiggly cartoon characters. Dad even brought a few MAD  magazines from the lads at the factory. And i discovered DON MARTIN, ARAGONES, DRUCKER, et al !

These were the glory days when every newspaper and magazine had cartoons. Dad encouraged me to draw 'gags' as i made him laugh and he used to have some good ideas and he encouraged me to send stuff off and when i got stuff published  he encouraged me to hawk my stuff around FLEET ST !...Not the most fun packed experiance if your not used to rejection, but that was one way of getting used to it.

The potential cartooning genius had become a compulsive doodler while still at school , people still remember pictures i did of teachers in between Thunderbirds and Interceptors from UFO And Eagles from SPACE 1999. This period of honing my skills unfortunatly coincided with an intensive supposed period of study ,so maybe not too suprisingly my reports and exam results left something to be desired ,culminating in me getting my arse kicked out of a bloody good school. I could've salvaged something and done art, but chose Biology instead , no i don't know why !

Not too suprisingly dad was dissapointed ,but mum was raging mad !....Did some 'normal ' jobs and got stuff published  so eased the parental disgust over the years, but my teens and the following years got me lots of trouble and sackings from jobs . MAGGIE THATCHER started the govt enterprise scheme and i became my own boss as i'd started the live caricature work and i was doing studio work before the computers screwed it all up. Mum had eased up on me and was quite proud when customers were telling her how good 'her Tim' was !

Her brothers in Ireland working on farms and building considered drawing and esspecially drawing cartoons as nothing like a job and i was dismissed as a lazy waste of time much to my mums pain. But i started doing well, i had a daily newspaper strip and started on a range of greetings cards and for a few years was raking it in. I was on more money than 'the workers' who were knocking me ,i even bought the family home off my mother much to her disbelieving joy.

I think the main moment for my mum when she was proudest and able to show me off was one day in the RATHDRUM CARTOON FESTIVAL during the late 90's, she'd fought in my corner when anybody put me down ,apparently, but she came into the village and i was sitting there with the other lads drinking and banging out the caricatures to a long queue of people and spreading joy and wonderment to the visitors as we do. My uncle the builder couldnt believe his eyes and his ears after mum put him right on a few things. After that mum didn't have to put up with her lad getting stick. Ever since that day ,i think she was shocked and suprised and realised that i wasn't quite the useless deadbeat she suspected i was and ever since shes backed and supported me through the ,has to be said 'drought -ridden years we all suffer through.

She says she always had faith i would be ok and successful, but i remember it slightly different, when she saw i was giving it a go she thought 'just maybe!', but she wouldn't stand for anyone putting me down and when i was earning and she saw us hammering out work and even doing jobs abroad she was amazed and suddenly proud..I'd won her over, eventually ! 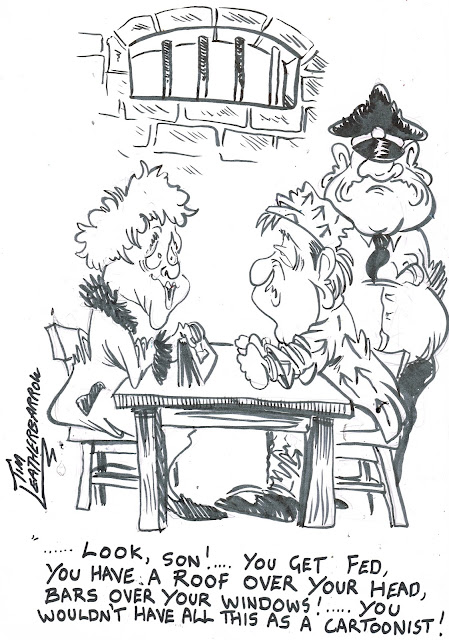 Posted by Tim Leatherbarrow at 15:12